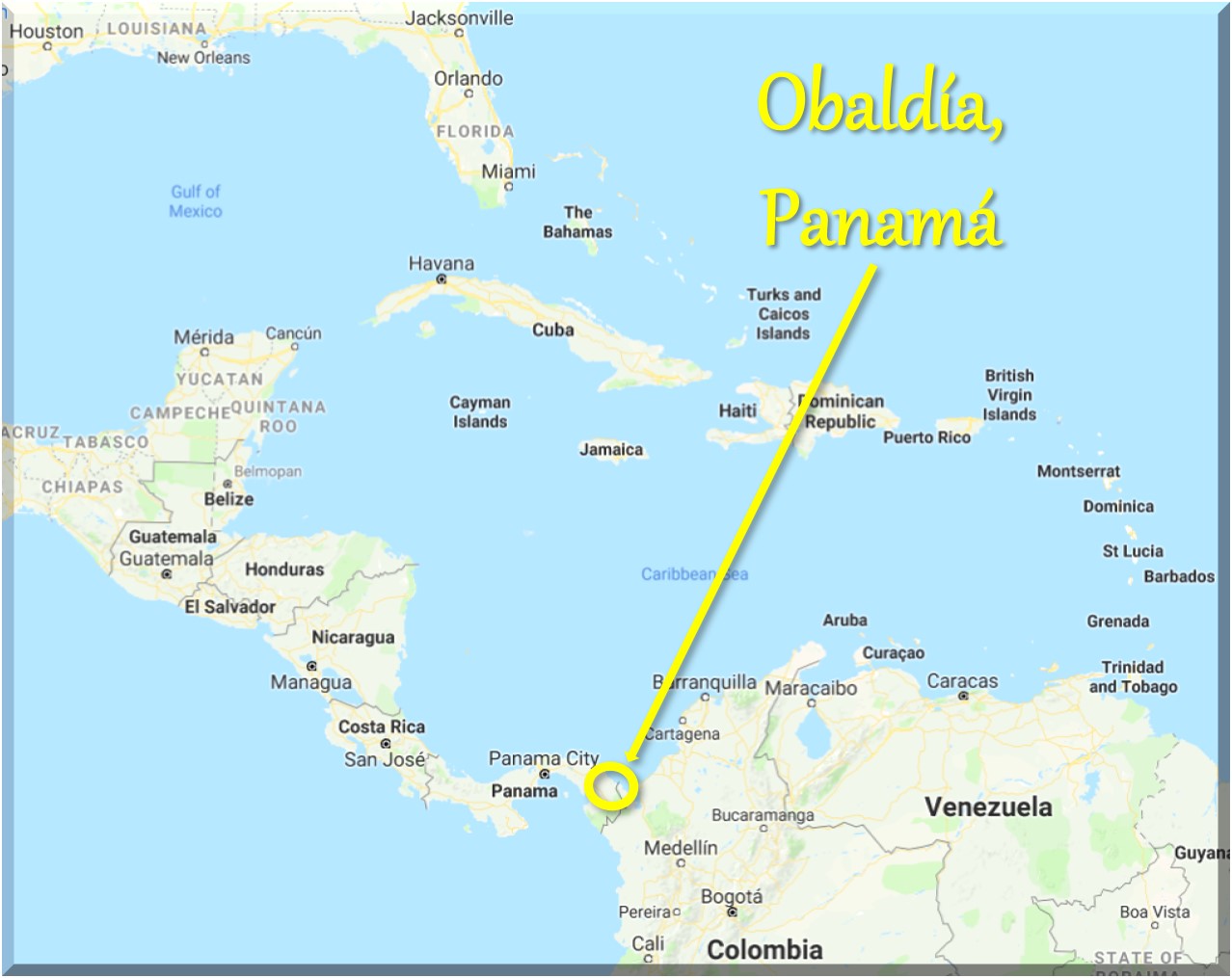 The infamous Santa Marta winds were starting to kick up with nightly gales. If we did not leave soon, we would be stuck for a month or more at the marina with no chance of a safe departure. The seas were big, over 20 feet (7 meters), but they always are around the northeastern tip of Colombia. We secured everything aboard, put out all our harnesses and safety lines, and departed Santa Marta a week before Christmas.

We altered our original plan of a direct, three-day sail from Santa Marta to Panamá. We opted for a more southerly route to break up the first 48 hours into daytime segments, and avoid some of the roughest seas and nightly winds. But there was no way around a rough day one. The coastal trip around Barranquilla and the Rio Magdalena is notoriously rough with huge following seas. It did not disappoint! 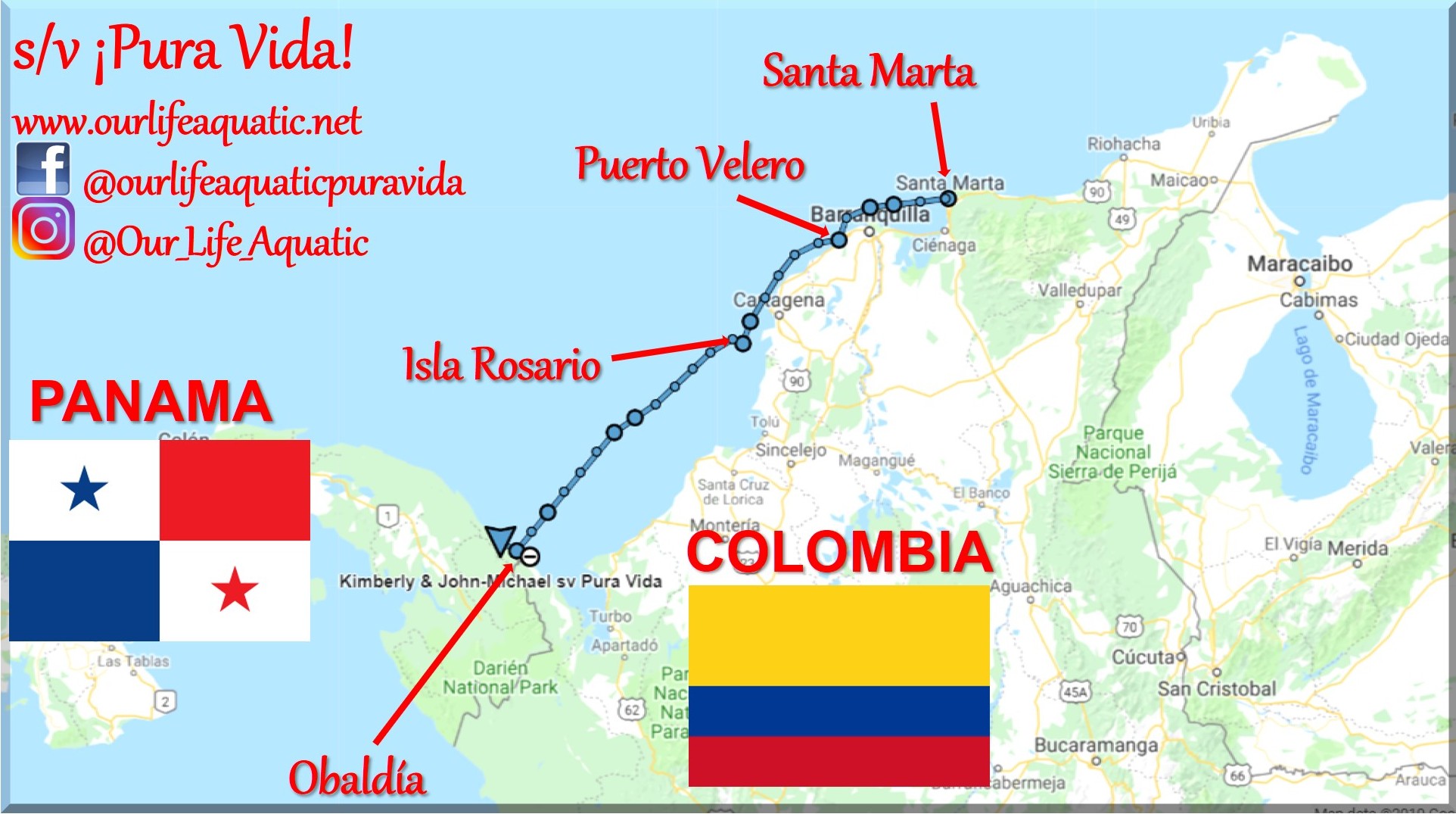 Just one hour out of the marina, the seas began to build. With each hour, they grew. By the time we started turning south towards Puerto Velero, ¡Pura Vida! was surfing down 20 foot waves at over 11 knots. During this rollercoaster ride, our view in the cockpit would alternate every ten seconds from massive walls of water in every direction to expansive vistas from atop wave peaks. We would occasionally get a break in the churning routine when the peak of a wave would slap our hull like thunder and douse us in gallons of saltwater. The boat handled the seas beautifully and we were never in danger, but we counted every passing second until we could reach our sheltered bay for the night.

An hour before sunset, we finally dismounted the rollercoaster and entered Puerto Velero with thirty knots of wind on the nose. The same winds that were propelling us at record speeds were now slowing us to a crawl as we inched our way under motor, 2 miles, to an anchoring spot. Anchor down! Deep breaths! Ice in glass!

The worst was behind us and the next few days promised to be much milder as we moved south into the Inter-Tropical Convergence Zone (ITCZ). In hindsight, our timing was good, and we picked the best possible weather window. Sailors that made the passage after us encountered even rougher conditions.

The rest of the passage was uneventful. We sailed past Cartagena to anchor overnight in Isla Rosario and set out the next day for an overnight crossing to Obaldía, Panamá. The seas were calm and a massive pod of dolphins played in our bow wake for almost an hour. We set out our fishing line and caught two tuna.

It was a striking contrast from the mayhem of the first day’s sail. Sometimes you have to weather rough conditions to get to magical places.

Shortly after daybreak on our fourth day since leaving Santa Marta, we spied the verdant, mountainous coast of northeastern Panamá. We were almost home, but one challenge lay ahead. Our electronic charts, both on our chart plotter and smart phones, were abysmally inaccurate in this area. We knew this ahead of time, so we navigated into the bay in Obaldía using paper charts, shore landmarks, and with Kimberly at the bow judging depth by water color. By the time we dropped the anchor in fifteen feet of water, the chart plotter indicated that we were over a quarter mile inland. Navigating this part of the world was going to be fun.

Obaldía, Panamá is a small town near the Colombian border, on a rugged shore surrounded by almost-impenetrable jungle. There is no cell service, no road out, and only the most basic of supplies. Because of its location on a historically major drug trafficking route, it has a police presence out of proportion to its tiny population. Fortunately for cruisers, it is one of the few places on the north Panamanian coast where you can complete all steps of the process to clear into the country.

Despite the minuteness of the town and the friendly, laid-back attitude of the locals, the clearance process was Kafkaesque. First step, check in with the police at the dock. After checking our passports and boat papers, they tell us we have to check in with customs before clearing with them. The customs officer was a large, amiable fellow that asked us if we had US$200 in cash because that’s the only way the entry fee can be paid. Luckily, friends that preceded us told us to be ready because there is no ATM in town. There is no ATM or bank for a hundred miles. No cash, no entry.

Before he could take our money, the customs officer directed us to the local copy center/internet café/bread bakery/native lands tax collector. In between breastfeeding her baby and tending to her young daughter, the lady at the internet café gave us the three copies of our boat papers and two copies of our passports needed for customs. She told us to pay for the copies after we come back. Why would we come back, we thought?

We returned to the customs office and watched the officer fill in by hand three long and repetitive forms. He then entered the same information in his computer and started to print yet more forms. He delicately removed these from the printer and began to enter even more information on them by hand. The most official form had five carbon copies. After being printed and hand-filled, each copy was separated, individually stamped, and the stamp signed over by the official. That was only round one. He produced another stamp from his desk, adjusted the date on it, and started thumping each page with it. The humor of the situation was not lost on him as he smiled at us and said, “you are getting your money’s worth in paperwork!”

After about an hour of stamping and filling and signing, he collected our money. This, however, required receipts – the $200 paid for the boat clearance, cruising permit, and individual clearances for each passenger. Each item required a separate, printed receipt with, you guessed it, stamps and signatures. Wham! Wham! Wham! Wham! “Bienvenidos a Panamá!” he said.

We walked out with a briefcase worth of official papers and headed next door to immigration. The officer here scanned our passports and checked her system before telling us she needed two copies of our passports, one copy of our boat papers, and a copy of the official clearance we just received from customs.

We headed back to the internet café/bakery/nursery for more copies. Once again, the nice lady said we could pay when we returned. Ahhhh, so that’s how the game is played. There’s going to be more.

Immigration stamped our passports, took our copies and told us we were done. With all these papers we could go finally check in with the police, but they also needed copies. We made our final visit to the copy lady and, this time, she allowed us to pay our copy bill of $3.50 and collected the local Guna Yala tax of $10 for the anchorage.

The police lieutenant took our copies and told us that we were almost done, they just needed to inspect ¡Pura Vida! Because we had anchored in the outer bay, we would need to move the boat to the inner bay and anchor close to the town dock to facilitate inspection. This seemed silly since our boat was visible from the dock and less than a quarter mile away, but we complied. After re-anchoring in the designated location and returning to the dock by dinghy, the senior officer asked out loud “who wants to go see this yacht?” Two young police officers jumped at the chance and we gave them a ride in our dinghy. Aboard ¡Pura Vida! they conducted a cursory inspection paying special attention to Kimberly’s basil plant. They smelled it, took a leaf and tasted it, then loudly declared “basil!” We offered them beer, but they declined and just asked for water and a soft drink. When we asked if we could take their picture, they beamed. They not only wanted us to take their pictures but also wanted pictures of their own. After the photo shoot, we returned them ashore and bid them farewell with hugs and handshakes. The clearing in process may be protracted, but everyone treated us like family guests.

Although we were tired, the bay in Obaldía was too rolly to spend the night. We headed ten miles west to Puerto Perme, a traditional Guna village with a postcard-perfect anchorage. We dropped the hook in the small bay and took in the sights. We had just stepped back in time. No cell service, no cars, no roads, and locals moving around the bay in dugout canoes called “ulus.” We had finally arrived in the remote San Blas islands (Guna Yala as it is known by its inhabitants) we had been hearing about for years. Being here made every rough passage, every annoying form, any hardship worth it. I think that’s the moment we decided to change our plans again: five months here would not be enough.