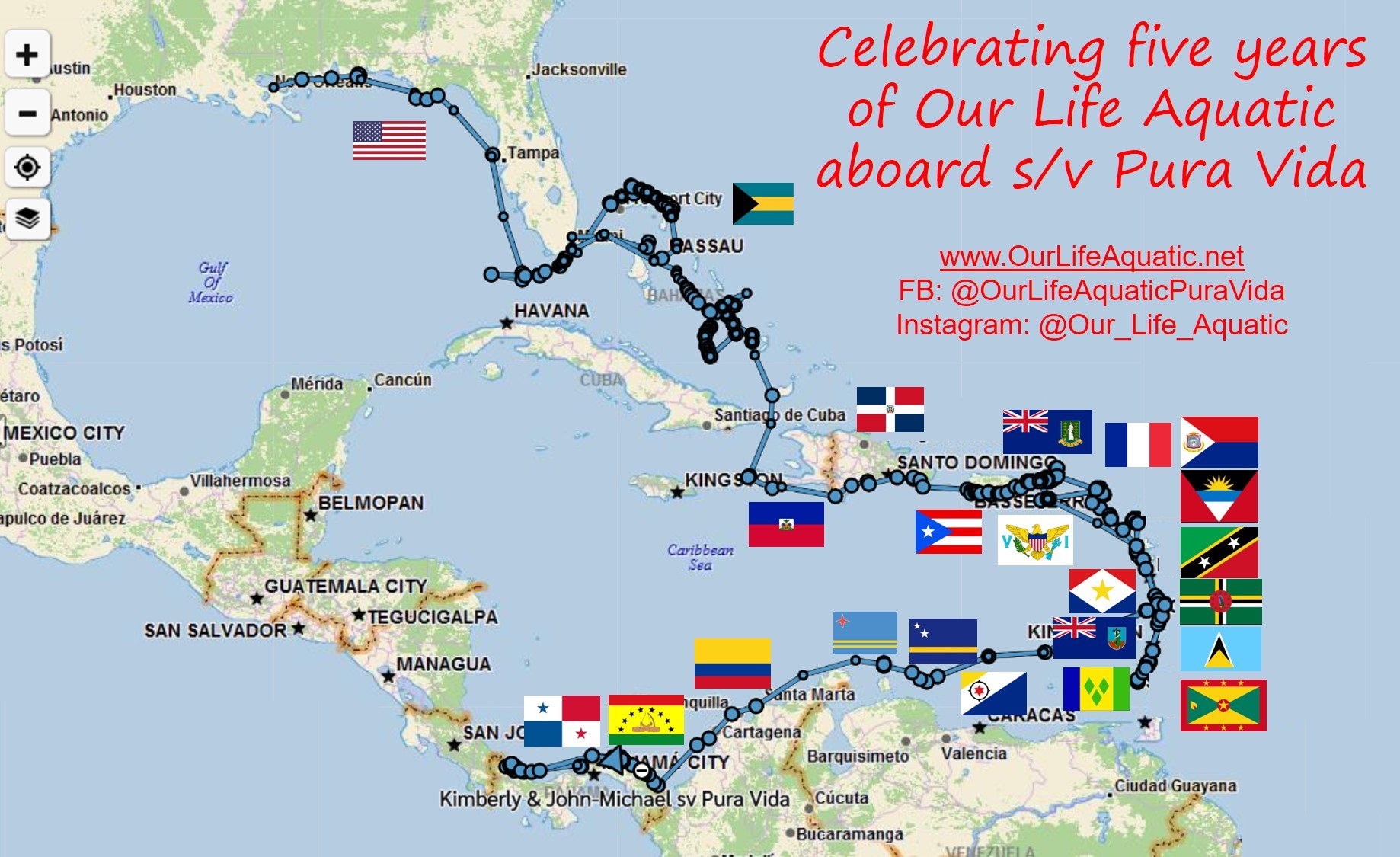 August 9, 2015 was a regular Sunday in New Orleans. It was expectedly hot, humid, cloudy, and the summertime sluggishness had settled over the city like a smothering blanket. It did not feel like a special day for us, yet it was arguably one of the most momentous days of our lives. After our morning coffee and a final weather check, we fired up Pura Vida’s engine, unceremoniously untied all our dock lines, and left our land life behind knowing we would never return.

We had held our bon voyage party the week before, so there were no onlookers waving goodbye as we glided silently out of the marina and into Lake Pontchartrain. Despite the lack of fanfare, we felt energized. Ten years of planning had just come to fruition. The lightness of our mood belied the weight of our decision. We left no possessions behind except for our French Quarter home for sale. We had no cars, storage units, jobs, or anything else pulling us back. We left loved ones behind, but we knew we would see them again, somewhere.

During the first three days of sailing, we were still plowing our familiar sailing grounds in the Mississippi Sound, so it did not seem any different to us than a normal summer vacation. When we passed Pensacola, Florida, however, it truly hit us. We had never sailed this far from home on our boat and we were not going back. From now on, everyplace we would arrive was going to be new. Nothing but unfamiliar waters and ports awaited us. After dropping anchor that night, we toasted with nervous excitement to new destinations.

When we look back to those early days, we hardly recognize the neophyte sailors we were then. Full of enthusiasm, motivation, and apprehension, yet woefully lacking in experience and sailing wisdom. Fortunately, the sea is a boundless teacher, albeit sometimes harsh and unforgiving. We laugh now at the dumb mistakes we made then with the levity afforded by having survived those mistakes unharmed.

The mistakes we made and the challenging situations we faced during the past five years have taught us volumes about sailing and our boat, but mostly about ourselves. When life-threatening adversity strikes, you understand how you behave in ways you never did before. When you are a team of two, alone against the elements at sea, the veneer of pleasantries vanishes, but in a good way. We barked instructions at each other, we yelled over howling winds, we saw each other at our worst and our best. After the dangers passed, we always tried to honestly evaluate our behavior and what we could have done differently. This is something we seldom, if ever, did when living on land. It made us a better team and deepened our closeness. We say this with humility, knowing that there is so much more for us to learn. Fortunately, the sea patiently awaits, ready to continue her instruction.

One of the most significant lessons we learned is to take our time. Most sailing cruisers joke that our travel plans are written in the sand, at low tide. They are quickly erased by myriad forces beyond our control. Don’t fight it, go with the tide and enjoy the ride. Our plan upon departure from New Orleans was to spend a couple of months in the Bahamas, a few more cruising the northern and eastern Caribbean, and arrive in Grenada by hurricane season 2016. Well, it took us two years to get there.

We realized right away in the Bahamas that there was simply too much beauty to go as fast as we planned. Our open-ended journey was about discovery and experience, not about checking off locations on a list. We were both elated at our realization, but knew it came with added dangers. A slow journey implied spending one or two more hurricane seasons in “the zone.” We would need to be ready to bolt on short notice or prepare Pura Vida to ride out any potential storms. It was not a decision we made lightly, but it was the right choice for us.

The resolution to slow down opened up new destinations for us. Thanks to the detailed blog by an online (now in-person) friend, Tammy on sv Dos Libras, we added Haiti to our itinerary. Because Haiti is off the traditional cruising path and there are no services for visiting boats, it added a level of risk and excitement to our plan. We are so grateful we chose this route and got to spend a few days among the welcoming people of Île-à-Vache.

I cannot fully describe the beauty and diversity of the Greater Antilles and the smaller islands of the northern Caribbean. Rushing through them would have been cheating ourselves, and contrary to our traveling style. After two years, however, we felt we had used up all our luck in dodging hurricanes and longed for a summer where we did not have to fret about major storms on a regular basis. We also heard the siren song of the eastern Caribbean beckoning us to move on and explore new islands.

We would sail to Saint Martin and work our way down the archipelago to arrive in Grenada by July 2017. We would spend the summer there, and sail west to the fabled diving mecca of Bonaire. Well, once again we slowed down. We loved Grenada so much that we stayed into October and this was limiting the time we could spend in Bonaire, Curaçao, and Aruba before the howling trade winds off the coast of Colombia made it unsafe to continue our westward track.

That’s when we made another fundamental assessment, one that we still refer to as the “Bonaire Decision.” We asked ourselves “Why are we feeling pressured to go west?” We did not have a good answer. It was a self-imposed, and arbitrary deadline. We resolved then to spend almost another year going back up and down the eastern Caribbean we liked so much and head west when conditions were right in 2018. The “Bonaire Decision” taught us to get rid of self-imposed restrictions, to avoid fixating on a deadline just because we had talked about it for a long time. It seems obvious now, but it was a fundamental change for us. Giving ourselves more time lifted our spirits and eased our minds. That night, we toasted to slowing down even more.

With the luxury of time on our side, we spent a glorious month in Bonaire in August 2018. We went diving almost every day in some of the most spectacular reefs in the entire Caribbean. We celebrated my 50th birthday underwater, just how I wanted it. We now could continue westward unhurried and in favorable weather conditions.

In October, 2018 we arrived in Colombia, our first port of call in South America, and the first non-island since leaving the U.S. Here, another “a-ha!” moment occurred. Colombia is so large, that we had to take trips by bus or plane to explore beyond our immediate vicinity. I have no idea why this did not occur to us sooner, but we both finally started seeing our travels as going far beyond the shoreline for the first time. We took a flight to Bogota to visit friends and explore the sprawling capital and all the big city life it has to offer. But why stop there? Cusco, Peru was just a short flight away and Machu Picchu just a train ride from there. Just like that, we booked our first “inland” trip.

A few months later, upon arriving in Panama we realized that a fabulous international hub existed just a couple of hours away at the Panama airport. It has daily flights to almost anywhere in the Americas. This facilitated our travel to Rio de Janeiro in 2019 to attend the wedding of a young cruising couple we met in the eastern Caribbean.

As crazy as it would have seemed on land, it seems perfectly normal among cruisers to attend the wedding of someone you recently met, and spent just a few days total in their company.

Cruising friendships are different than land friendships or those you make on short vacations. When you click, everything is on fast-forward. You can become quick friends with people from all over the world. The sailboats at most of the anchorages we have visited are adorned with flags from far-away places.

The common bond of sailing the seas in small boats seems to reduce cultural and language differences and facilitate friendships. You can be inseparable for days, weeks, then part for different countries, not knowing when, if ever, you will meet again. Luckily, social networks make it easier to stay close, as our hulls go further away from each other. Letting go of people and places we love has become routine. It’s never easy, but it is a requisite part of being a maritime nomad. One day, perhaps, we will find a patch of land that tugs at us more powerfully than our wanderlust. Who knows? We may have already been there and just don’t know it yet.

We have been asked several times, “What’s your favorite place? and “What’s your favorite part of cruising?” The first question is impossible to answer. We have visited too many idyllic and diverse spots to have a favorite. The second question is easier. The best part about cruising is that you get to see incredible, rare sights because you just happen to be “out there” a lot. These events are special because they don’t happen often, or only happen in remote places. You can’t buy your way to see them because you never know for sure when they will occur. By being at sea almost constantly for five years, we expose ourselves to a lot more opportunities for jaw-dropping sights and events. The best example I can recall is the confluence of being in a bioluminescent bay (there are only five in the world) at three in the morning during a moonless night while a meteor shower streaked the sky. That is definitely the best part of cruising.

Something humbling happened just this morning before I sat down to write this blog. It is a good way to punctuate my thoughts about the last five years of cruising. A military colleague from long ago reached out to me out of the blue. He said he is retiring in eighteen months and is not happy considering a life in just one location. He has been following our travels and wants to join the community of aquatic wanderers. He did not know this was a thing until he read our posts. Just like we were inspired by so many that went before us, he was inspired by us to take a leap. He is ready to jump into a life of adventure, and pursue his dreams. He has already begun to look at boats, the poor guy. He’s done for. Once you get the bug, it doesn’t go away, it only gets worse.

It has been five years. In that time we have visited over twenty-five countries and territories, hundreds of islands, and too many anchorages to count. We have logged 9,240 nautical miles at sea. We have friends all over the globe. We were amazingly lucky to be in one of the most remote, yet friendly places in the world when the pandemic started, and are still here, enjoying the hospitality of the Guna people and the generosity of all Panamanians. Our journey has been remarkably different than we imagined…but so much better!