The forty-two mile sail from Antigua to Guadeloupe was fast and bouncy. The trade winds were steady from the east, but with fluctuating intensity anywhere from the mid-teens to gusting well over thirty knots. The seas were around eight feet and hitting us just forward of broadside. As usual, ¡Pura Vida! loved the high winds and plowed through the waves with ease. This was the first crossing with our repaired autopilot, and we were delighted that it performed flawlessly.

We arrived in the town of Deshaies (pronounced “DUH-hay”, at least I think that’s right), in northern Guadeloupe, tired of bouncing, and ready for some French wine and cuisine. As is the case in every French island, clearing into the country is a breeze. All you have to do is find the local merchant that maintains a customs and immigration computer, fill out your entry document online, and have the merchant verify your passports. But, as is also usual in France, long summer vacations are the norm, and businesses close for several weeks; including the one that maintains the customs computer. Fortunately, there was a little sign on the door directing us to a print shop across town where another computer was temporarily installed. Unfortunately, the print shop was closed on the day we arrived, and also the following day. 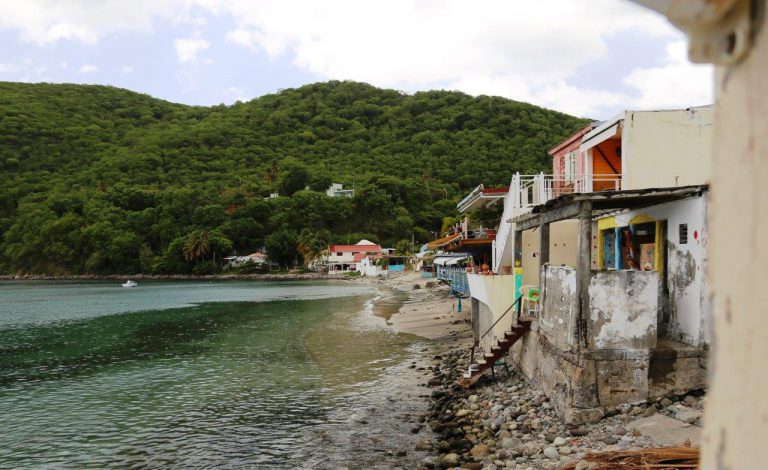 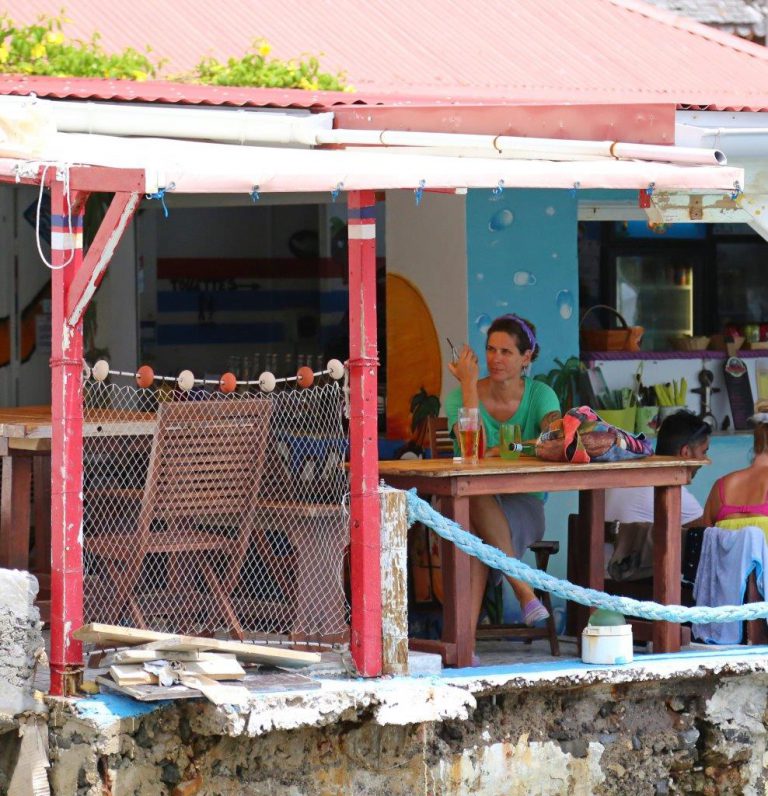 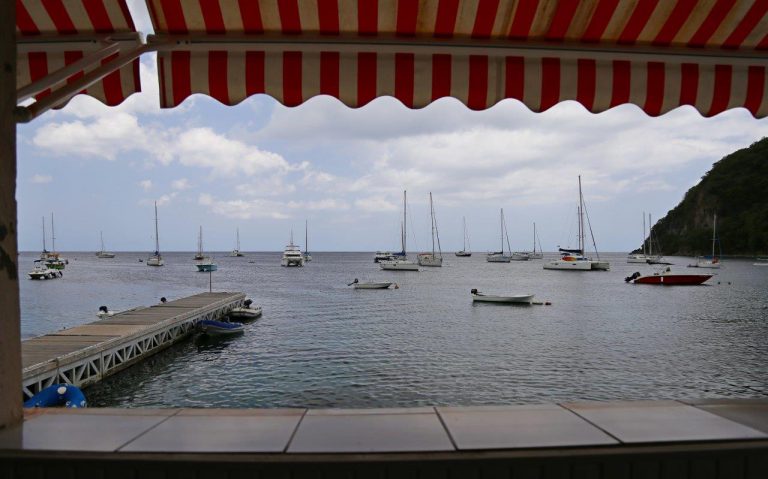 Despite not being legally cleared into the country, we felt comfortable disembarking and enjoying the town while we waited for our official authorization. Unlike the British islands and former British colonies that can be exceedingly strict about procedures, the French live up to their laissez faire reputation, and will not fine you or threaten you with imprisonment if you go ashore before formally clearing in.

Deshaies is a small fishing town that is showing her age, but still clutches her charm. Most buildings are crumbling a bit here and there, and maintenance that should have been done a decade or so ago is still on the to-do list. Life is slow, and the people are warm and welcoming. Most food is country-French with a Creole flair, and fresh seafood – usually caught that same day – is on every menu.

We were eager to explore a dive site several miles south, so we left Deshaies a couple of days later, after getting our official country clearance paperwork. When we got to our dive destination at Pigeon Island, the roll of the sea was unbearable, and not likely to stop overnight. We tried to tuck ¡Pura Vida! as close to shore as we dared in several spots, before we gave up and sailed to a more protected anchorage.

As we sailed south, we spotted a small bay that was not extremely protected, but had potential. It was getting late in the day and we wanted to drop the hook before sunset. We found a spot barely shallow enough to anchor, and with almost no rolling whatsoever. This was our home for the night, the town of Bouillante.

Nobody will accuse Bouillante of being picturesque. It is more reminiscent of a semi-industrial strip park than a seaside village, but as we read about it we realized it is a hidden gem for one reason: natural thermal springs! We kept seeing locals gathering at one spot on the beach, and wading in the shallow water. The beach was quite large, but everyone was bathing in only one spot. We had to go check it out! 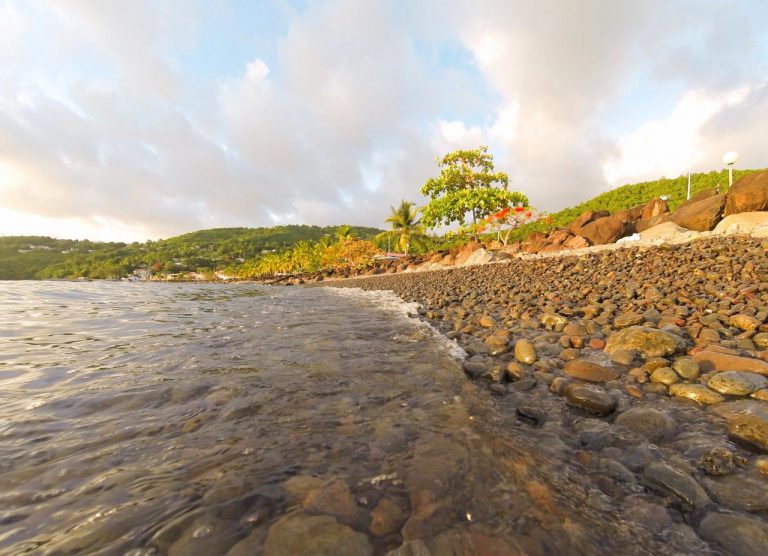 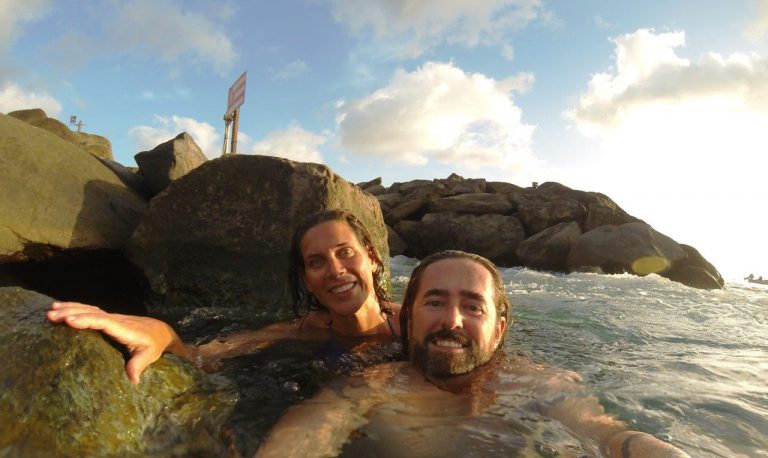 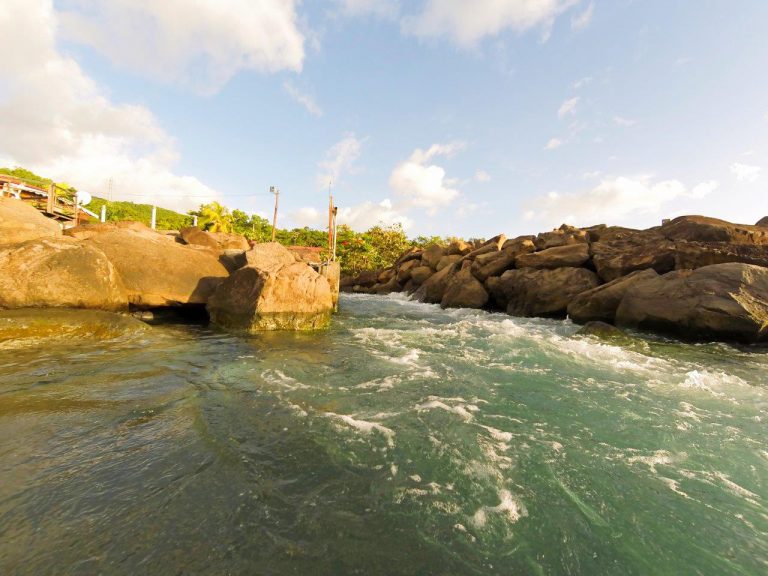 Where the hot river meets the bay

We tied Lagniappe to a decaying metal dock near the beach, and swam toward the local bathers. As we got closer, the water got hot! Almost too hot to take in some areas. The little corner of the beach with the crowd was the sweet spot where a river of hot water meets the cool Caribbean Sea, and where you could move from cold to warm to hot as you pleased. We were delighted with our accidental find and soaked with the ever-growing crowd of locals as sunset approached. 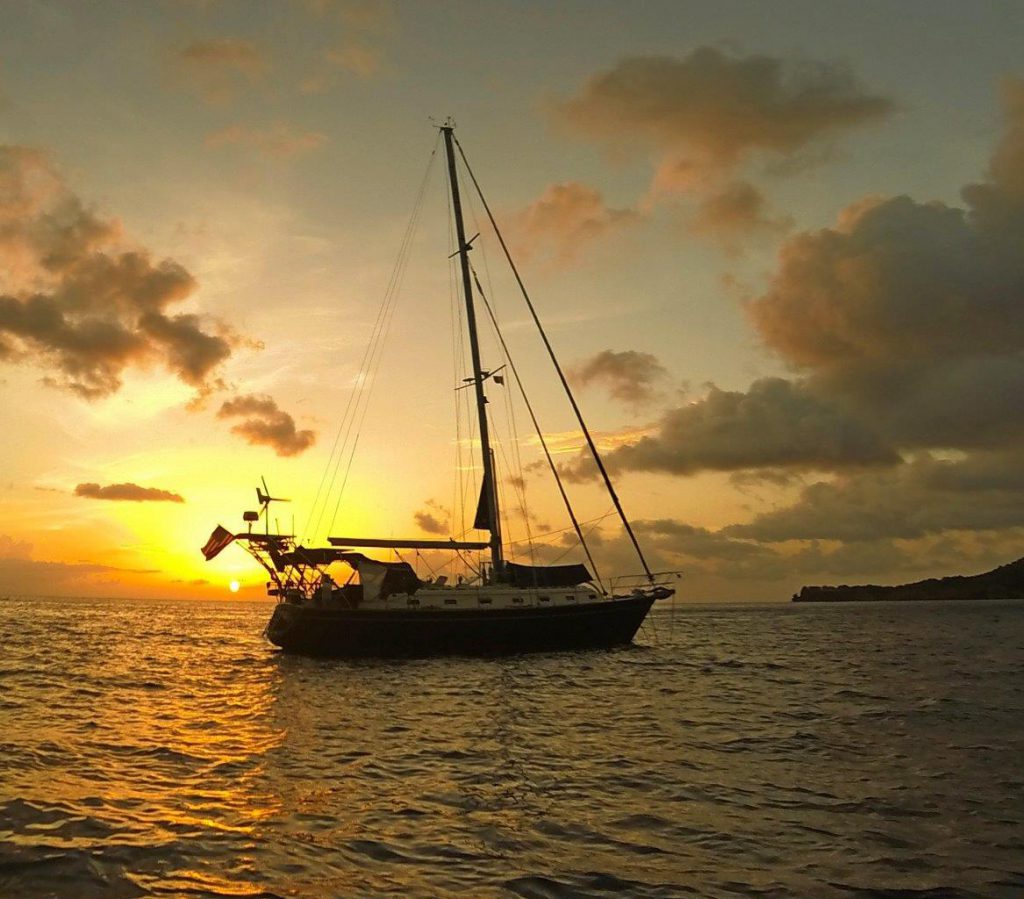 The next morning we sailed south again for a small group of islands known collectively as Îles des Saintes. Although it is a rather short passage, Mother Nature made it an exciting one. As we neared the southern tip of mainland Guadeloupe, we got hit with a triple whammy. The winds pick up speed around the mountainous points of the island, the sea shallows making the waves steeper, and a gale with blinding rain moved over us. A lighthouse just half a mile away disappeared in the rain and we could not see beyond our bow! Fortunately, we had time to reef our sails and knew that aside from fishing traps with floating lines, there were no obstacles in our way. Every time we stuck our head outside the protection of our dodger to get a better view, our eyes and faces were pelted with tiny knives of driving rain. Just as quickly as it arrived, our tormentor passed us and the skies cleared again.

Just a few miles ahead was our destination, the town of Terre de Haut in Îles des Saintes. Although this is a hotspot of cruiser activity during high-season, the mooring field was nearly empty, and we had our pick. The anchorage is nestled in among several small islands providing 360 degrees of stunning vistas, and all weather protection. 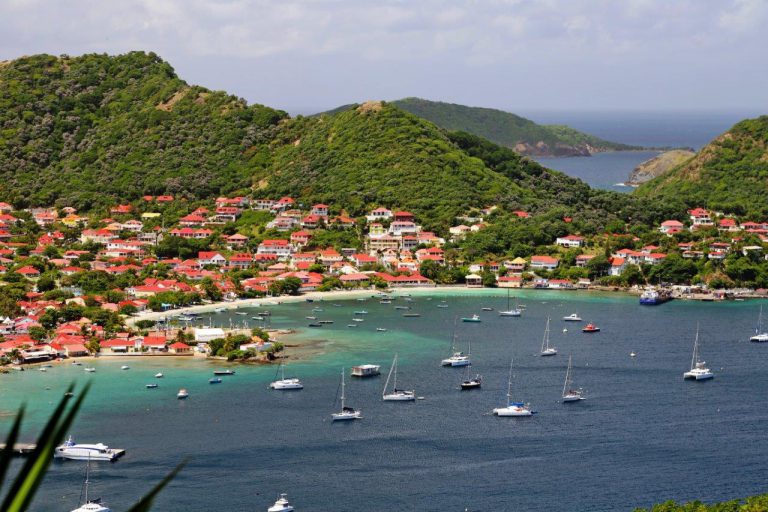 Looking at our anchorage from the south

The town of Terre de Haut and the surrounding countryside are too pretty for words. You can just start snapping photos and they will all look like postcards. Did I mention that the snorkeling and diving are excellent? 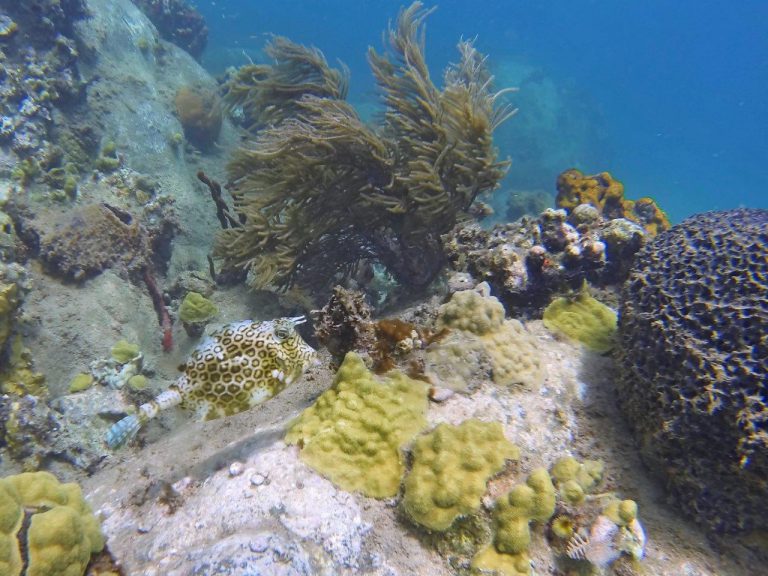 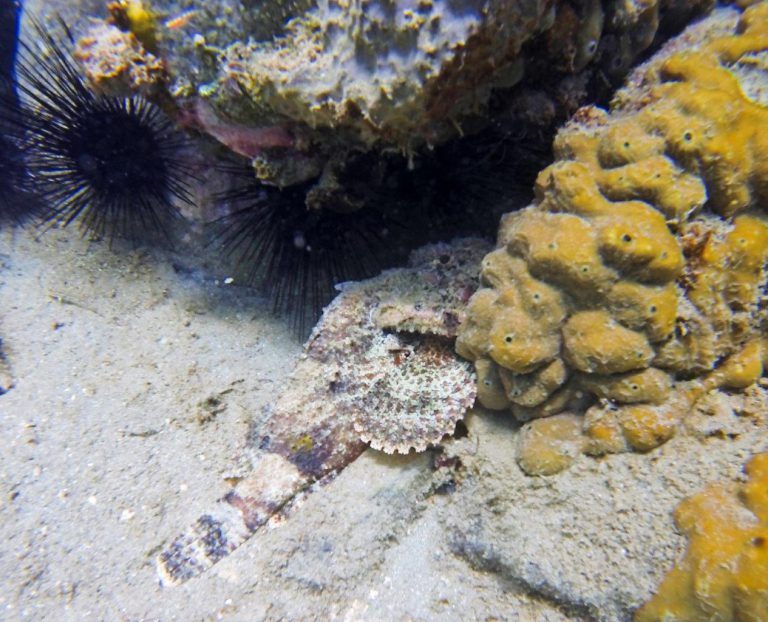 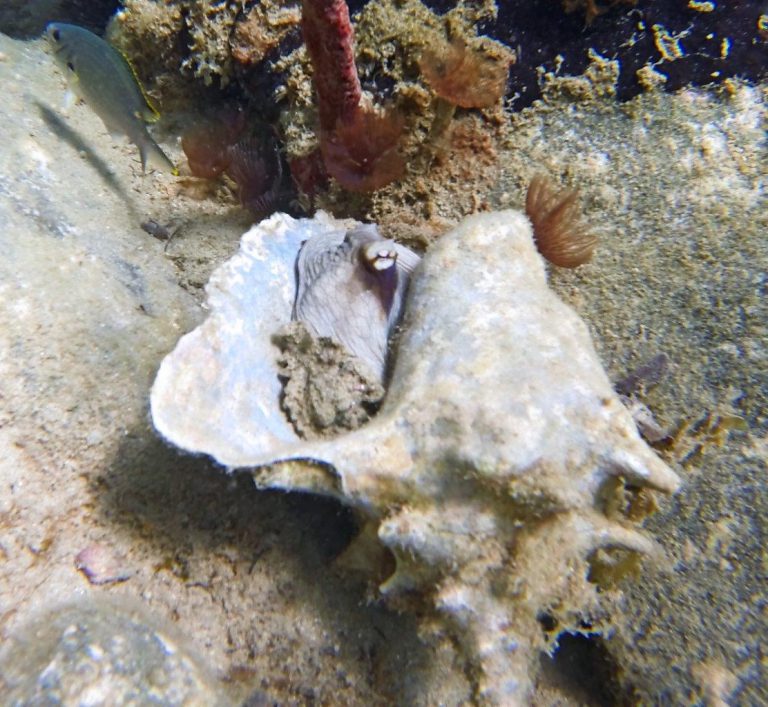 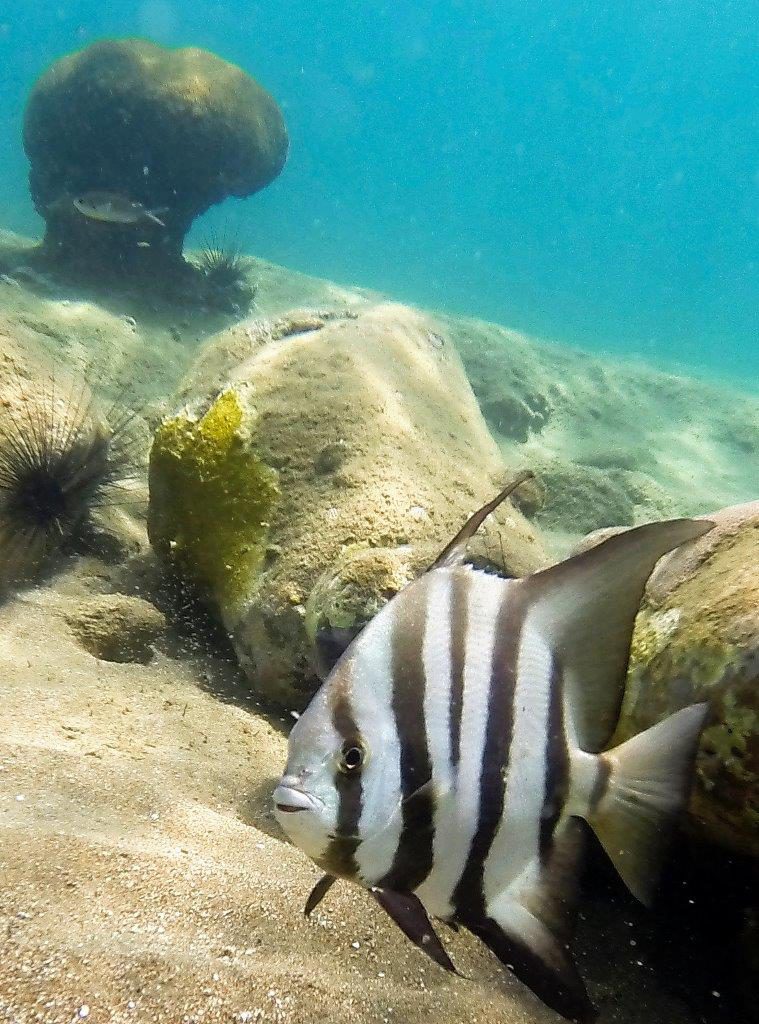 Atlantic Spadefish - a rare find in the Caribbean 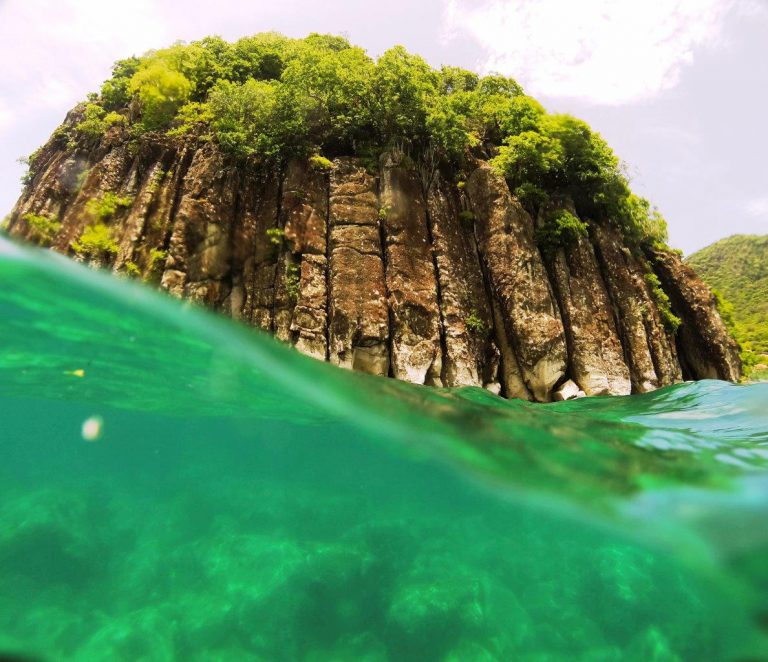 "Sugar Bread" point above and below

I think we have a new contender for our future land home! 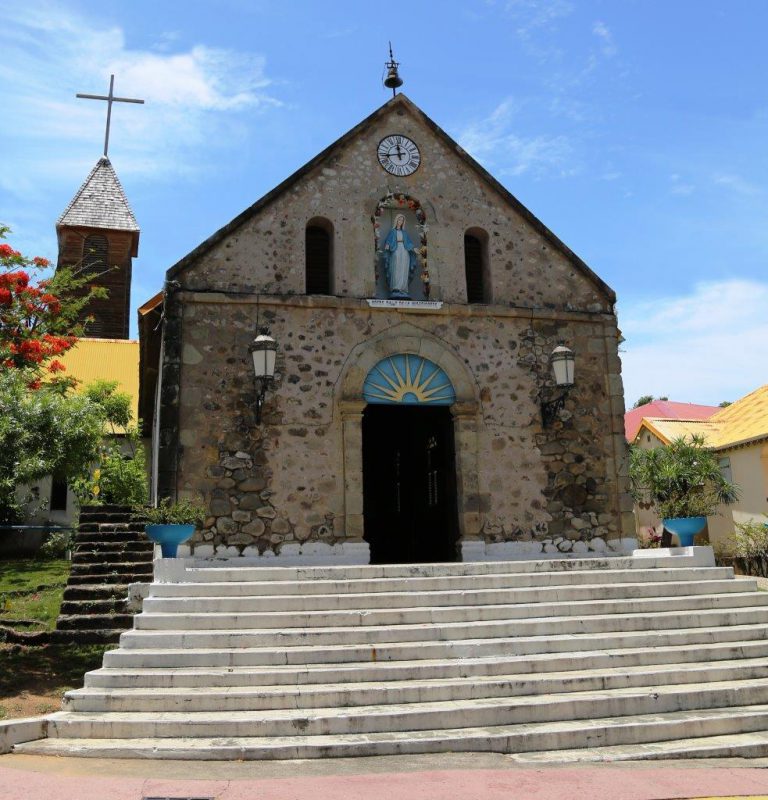 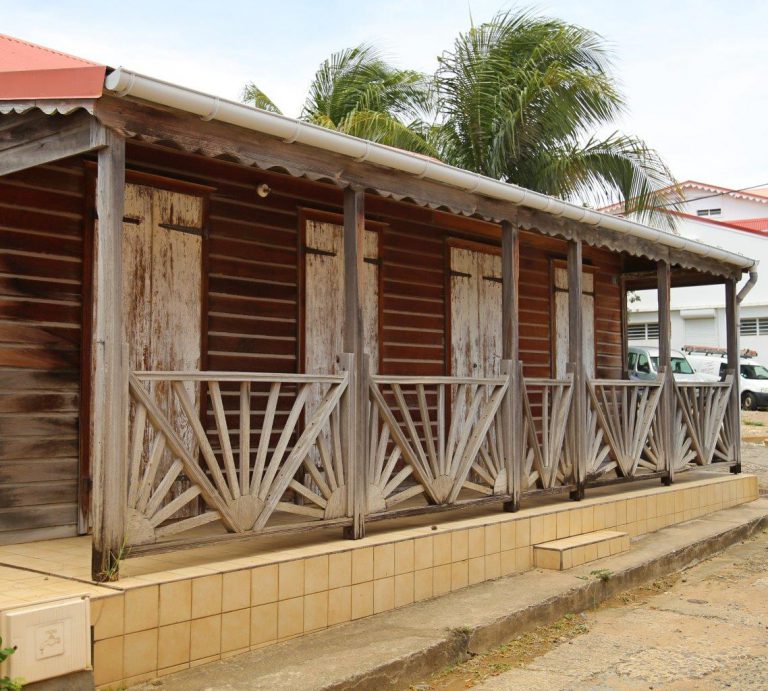 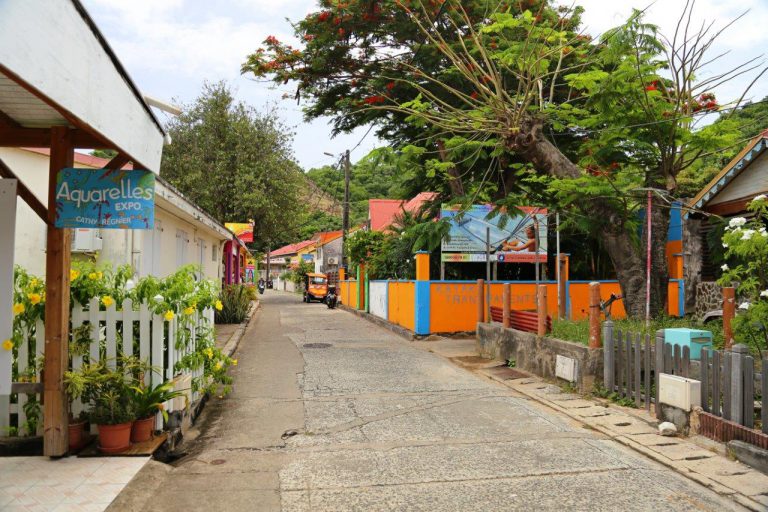 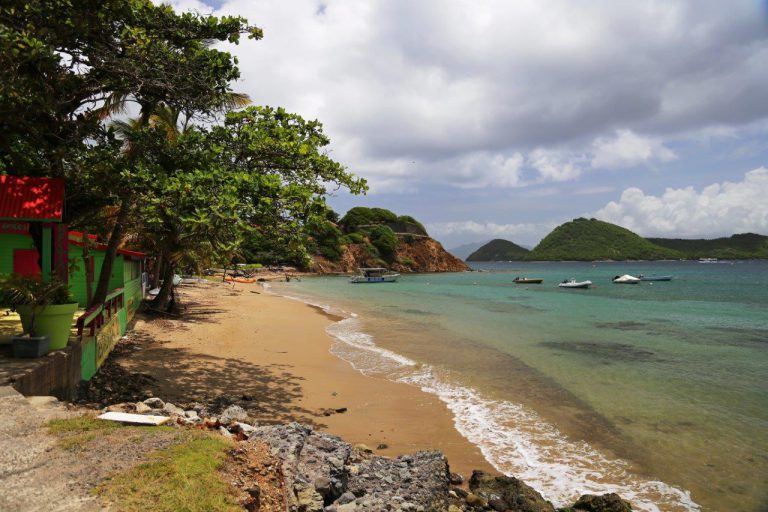 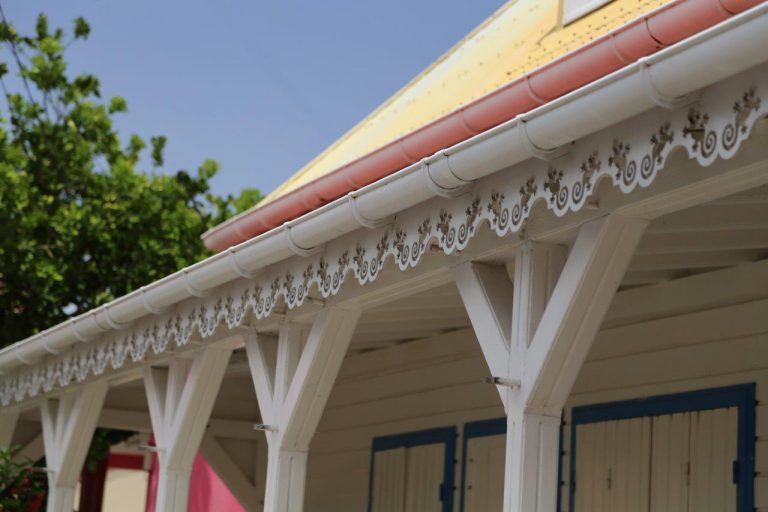 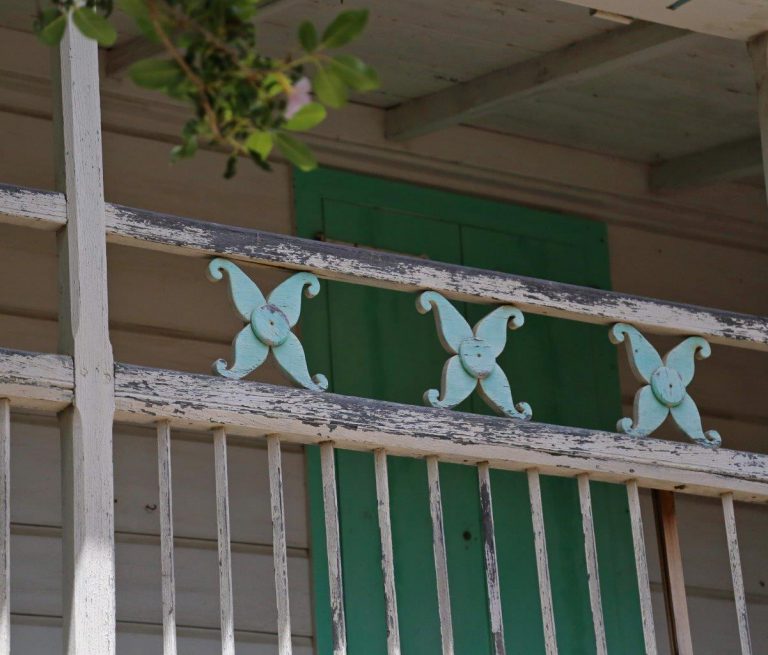 As if all this scenery was not enough to make us want to stay, the town has several spectacular French restaurants and plenty of land activities. We walked along the beach to an old fort on one side of town, and were greeted by the friendliest goats ever. 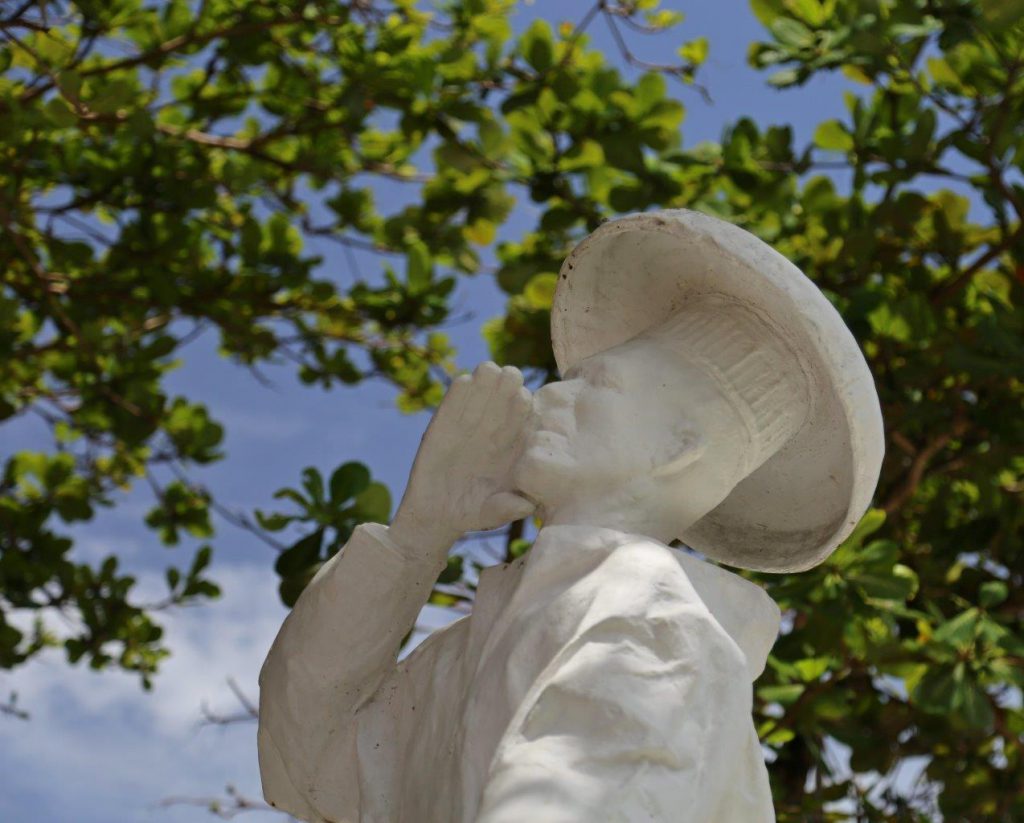 Monument to fishermen lost at sea 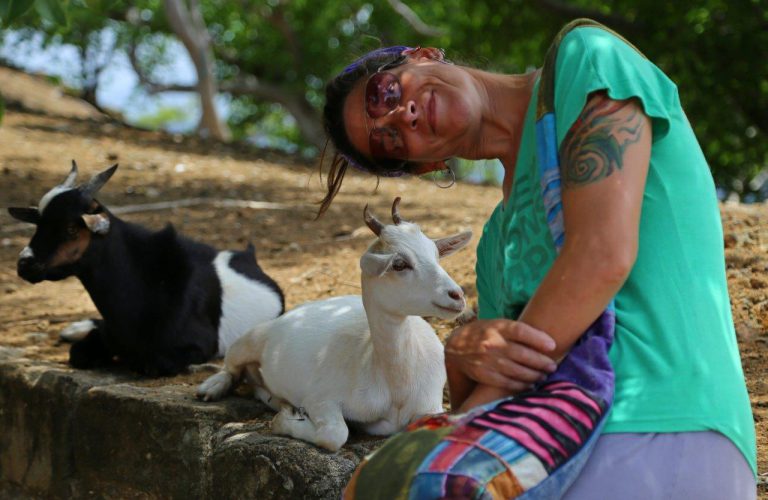 Even the public restrooms take a lunch break

We also hiked to the magnificent hilltop fortress of Fort Napoleon, which offers the best views of the islands, and a museum of local history. We learned that Îles des Saintes hold the honor of being the only set of Caribbean islands to never have slaves. 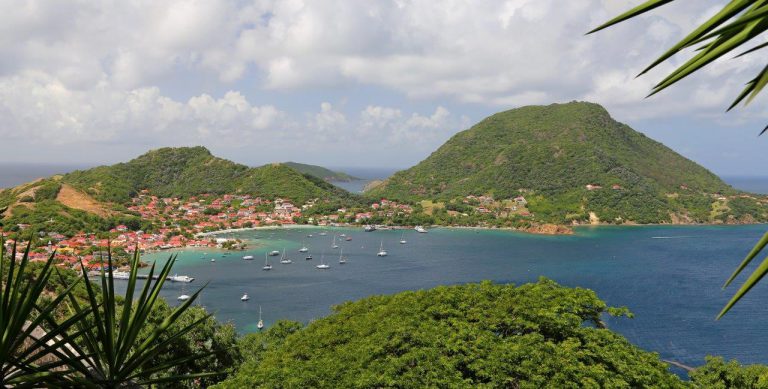 View of anchorage from Fort Napoleon 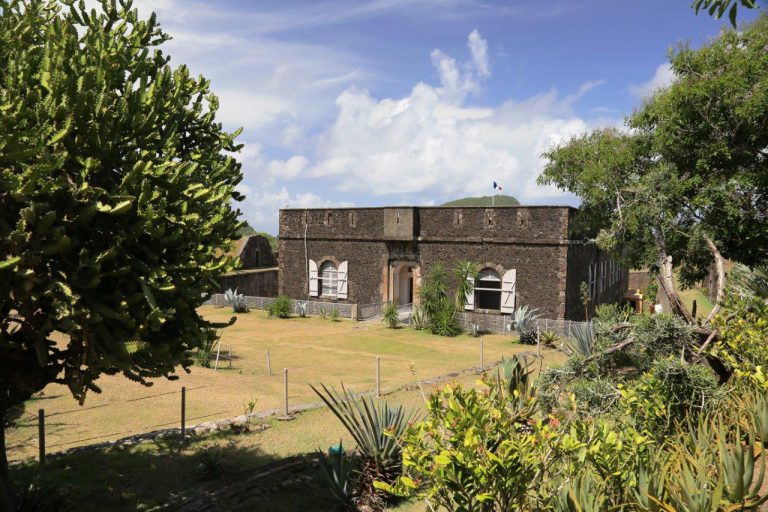 The inner fortress and museum 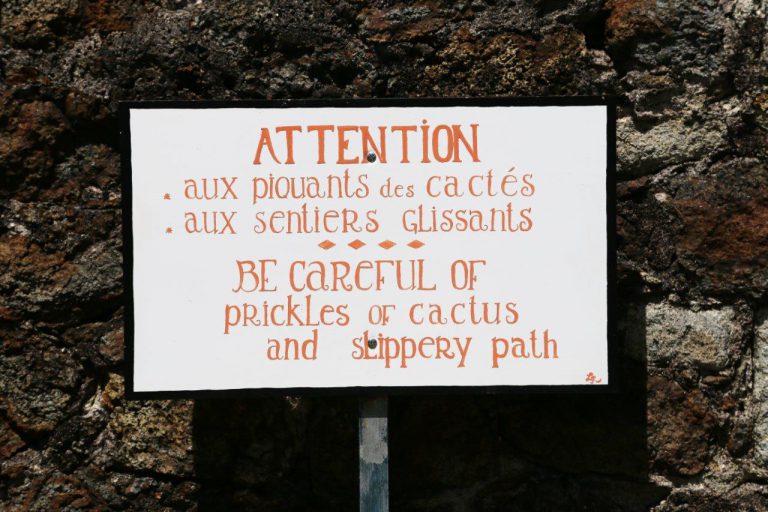 Gotta watch our for those "prickles"

We nearly wept as we departed this idyllic location, but hurricane season was upon us, and we wanted to move south. Plus, our next destination is touted as one of the most pristine islands in the entire Caribbean. So, we got our clearing papers, purchased one last baguette, lowered the French flag aboard ¡Pura Vida!, and raised the sails in the direction of Dominica. 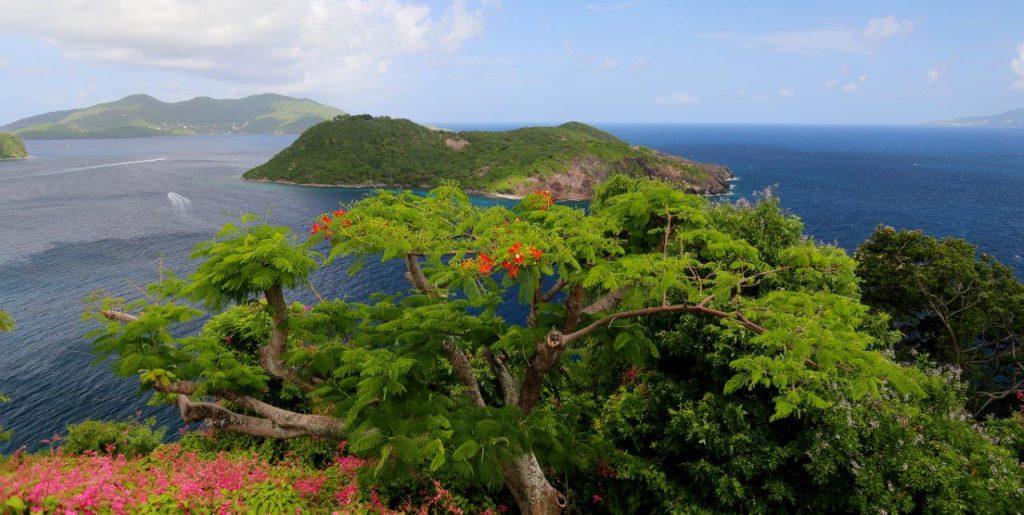