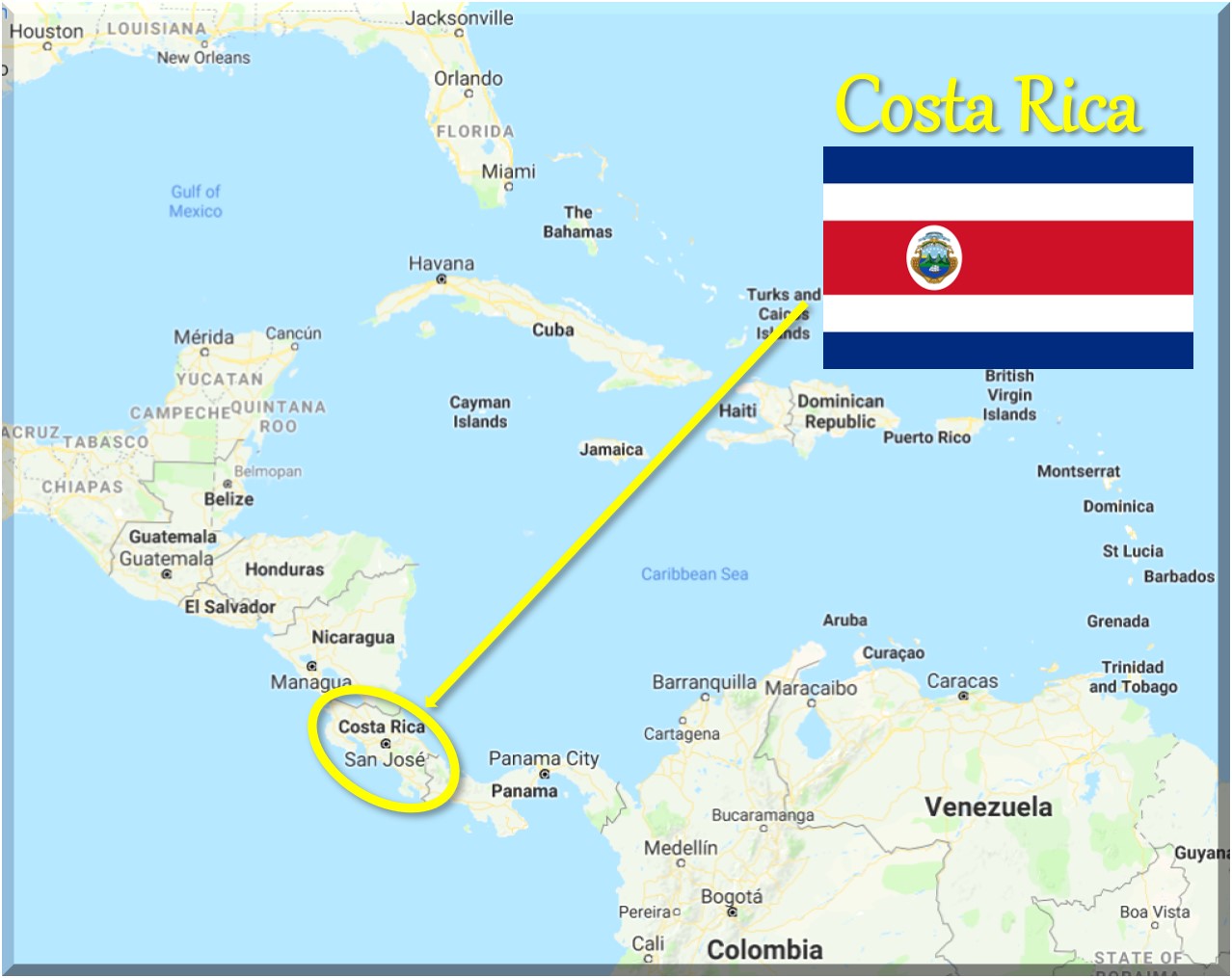 Before we knew it, we were hauling ¡Pura Vida! out of the water and it was time to leave Panama. Hauling out is never an easy or relaxing process, as you see your home and all its contents unceremoniously lifted from the sea and set to rest, unnaturally, on dirt. They call it “being on the hard” since the boat is not floating, and is on solid land, but it has to also be a reference to the hardship of the owners as they watch their precious boat that has carried them safely across the sea needing metal braces just to keep its balance. After ¡Pura Vida! was safely secured in the boat yard, we went into a frenzy of activity to prepare her for several solitary months. We spent two dirty, sweaty, insect-filled days before we could satisfactorily declare ourselves ready for departure.

The following morning, we hopped a van for the ninety-minute ride to the Panama-Costa Rica border at the Sixaola River. The first step is to officially clear out of Panama. This was a relatively painless as the departure lines were short. The next step seemed like a scene from the television show “Amazing Race” as we carried four overstuffed duffel bags and two backpacks by ourselves on foot across the Sixaola River bridge. Although there is a highway bridge crossing the river, we were required to go on foot. Once inside Costa Rica, we queued up at the back end of a ridiculously long line for immigration. We learned that the line that day was unusually long, but that knowledge did nothing to alleviate the sweltering heat and lack of shade. After almost two hours, we reached the officer that cleared us into the country. Stamp! Stamp! We were in. We gleefully took our bags to a different waiting van and settled in for the seven hour ride to San José. 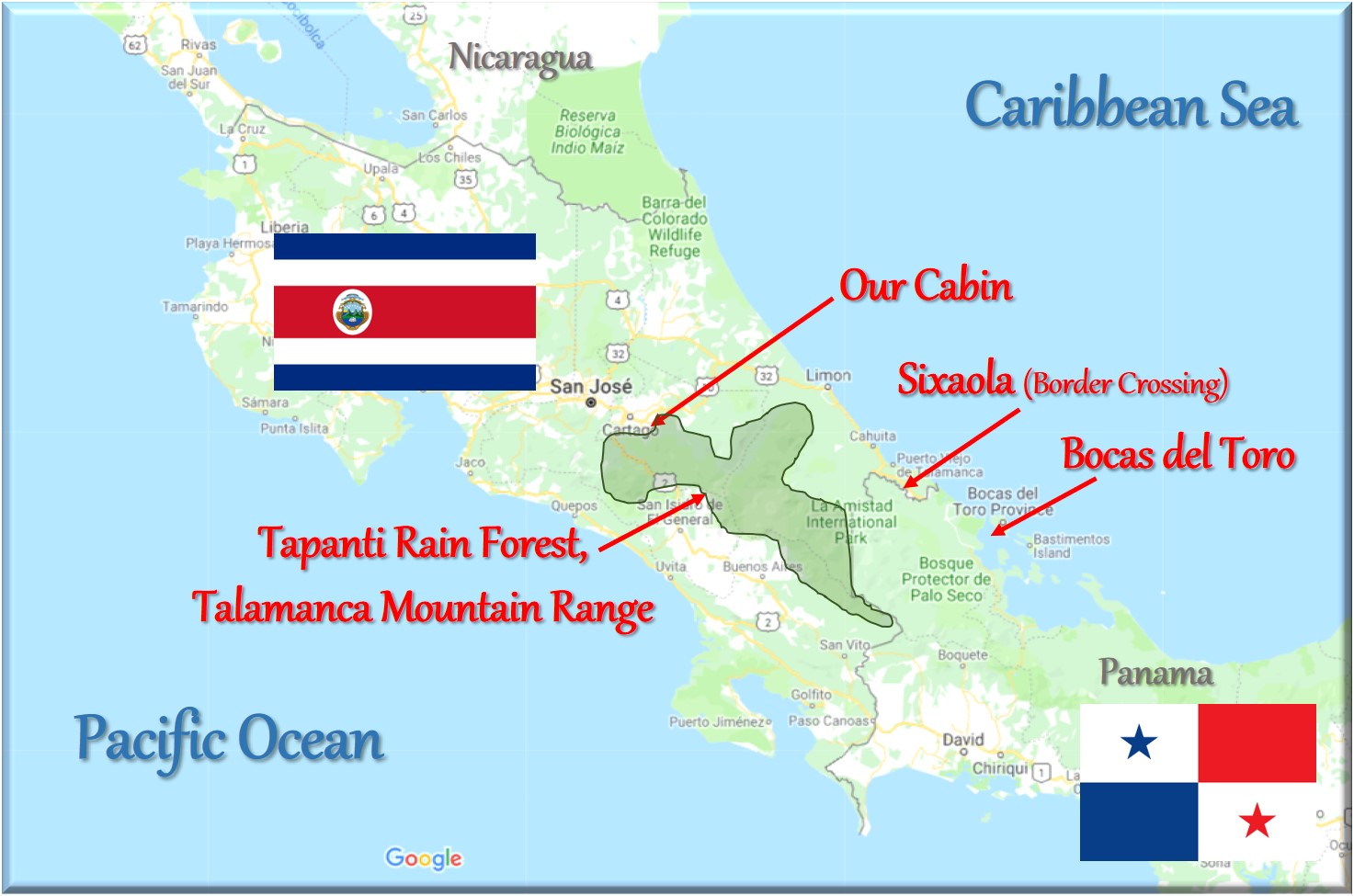 We spent the first night at my sister’s house in San José catching up in person for the first time in years over copious glasses of wine. The following morning she drove us to our rental house, a small loft in the mountains of Cartago overlooking coffee plantations and a lush rainforest reserve. We were home for the next two months. We officially became landlubbers.

Our mountain retreat served as a platform for exploring the nearby attractions. But we really did not have to leave our own veranda to feel the magic of the rainforest. The pictures on the website did not do it justice. The verdant landscape seemed fake, as if someone had edited a picture with a heavy hand. Every morning, dozens of species of birds would serenade us as they frolicked in the trees. The clouds would roll in daily, caressing the mountaintops and sometimes lingering in the valley below. We adore the ocean, but this was an incredibly beautiful change of scenery. Our charming hosts, Stephen and Nancy, call it Paradise Peak. We cannot imagine a better name for this idyllic retreat. (If you are interested in staying at this property, contact us for details.) To add even more charm to the place, Stephen loves to bake and share his goodies. And as a bonus for us, their Rottweilers were our daily companions. Every morning they wiggled happily into our cottage to slobber us with kisses, play fetch, and lounge for hours on the cool tile floor.

We are used to getting up close with marine life, but now that we are living on land, we get to see all sorts of fun new critters.

Our favorite critters, however, were the four lovable Rottweilers that live on the property and visited us every day. These friendly girls would sometimes spend several ours just chilling by our sides, loving the affection we lavished on them. They stole our hearts from day one.

In our first month of land life, we had young visitors coming. Our goddaughters, Tes and Audrey, ages thirteen and fourteen, were visiting us from the US for a week each during the summer school break. Eagerly, we used their visit to explore and pack as much adventure as possible into their visits. We rafted rapids, rappelled down waterfalls, hiked jungles and volcanoes, rode horses, herded cows and milked cows, made fresh cheese from the milk, and toured ruins and markets. After each visit was complete, we were thoroughly exhausted. 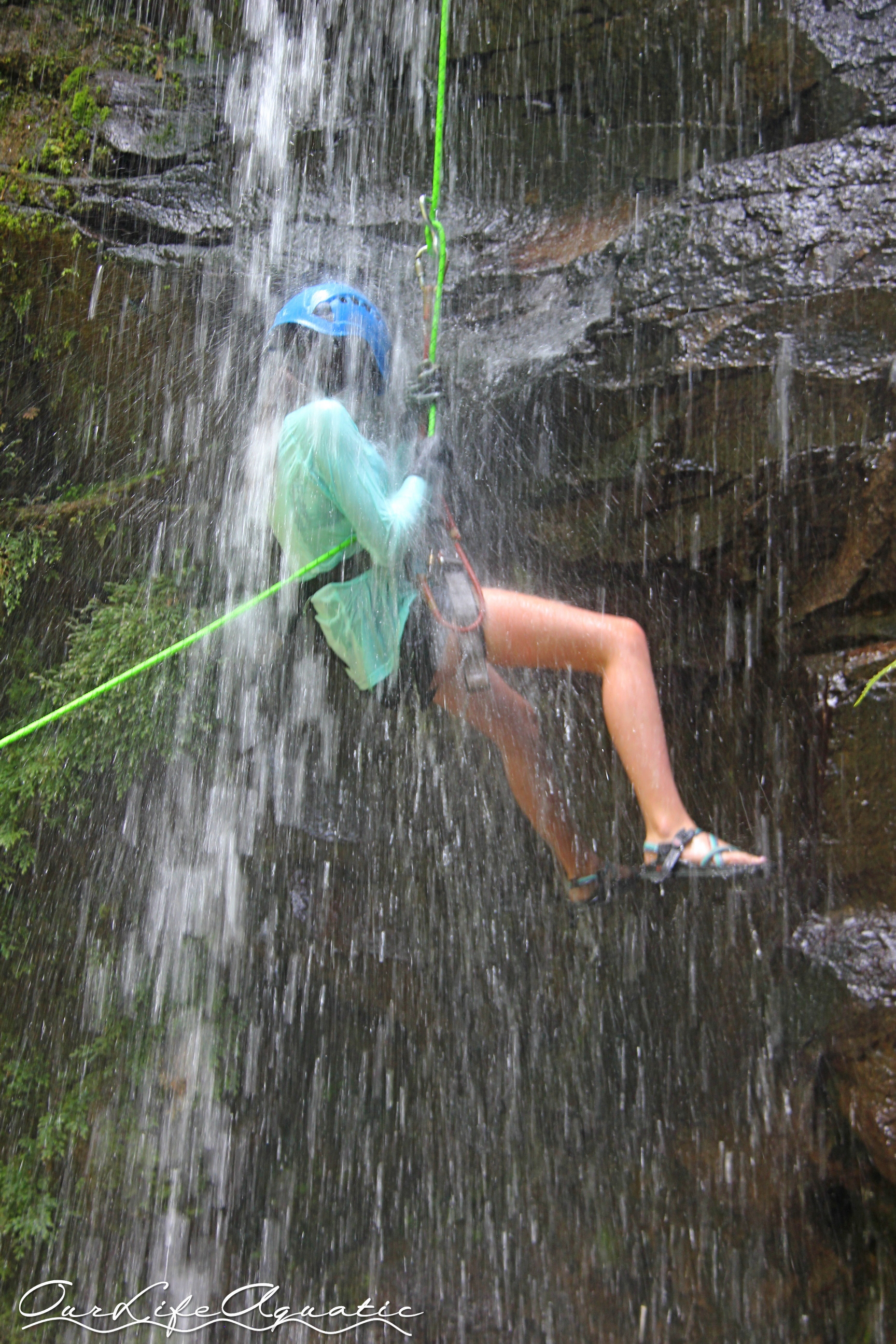 In what can only be called a fortuitous coincidence, one of Kimberly’s dear friends, Michelle, had planned a family vacation to Costa Rica without knowing we were here. They were staying a few hours away from our house, but you do not pass up opportunities like this. We packed up the car and went on a road trip. We eagerly crashed their vacation and joined them for a hanging bridge jungle exploration, a volcano hike, a waterfall swim, and lounging in thermal baths heated by the Arenal Volcano. It was a beautiful reunion that was long overdue.

In addition to our guests from abroad, we had a lot of local family to visit. After a twelve-year absence from Costa Rica, we had a lot of catching up to do with my myriad cousins. In all cases, re-connecting was as easy as saying hello. Although the years have passed, we immediately felt the love and warmth of our Tico family. We also spent some time sightseeing on our own.

I was on a mission to expose Kimberly to as many local delicacies as possible. Some she had already experienced in previous visits, but her education had to be stepped up to master level. We gorged on pejibayes, jocotes, mamones chinos, chicharrones, stuffed churros, local cheeses, gallo pinto, maduros, dulce de leche, coquitos, cajeta, torta chilena (which is not Chilean, go figure), agua dulce, guaro, and fine Costa Rican rums. We joked that familiar fruit like mangoes and papayas tasted better here; which, of course, they do. (Author may be a tiny bit biased, but also right.)

Stay tuned as we relocate next month from the rain forest mountains to the dry forest hills of the pacific volcanic range and continue our life terrestrial until November.