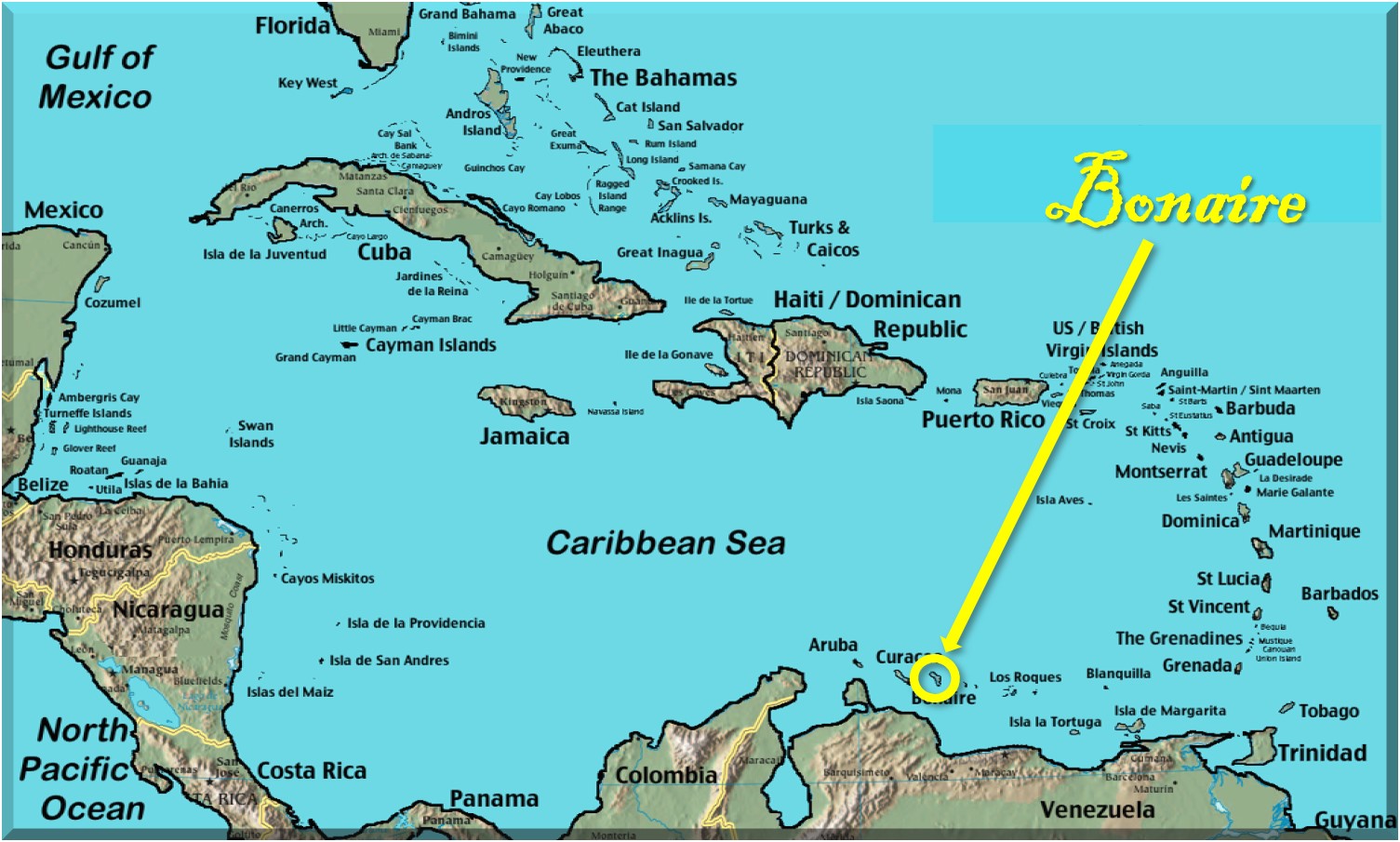 The three day journey from Martinique to Bonaire took us just as long as expected, but smooth sailing it was not. With the wind almost directly behind us, we were moving fast; but also rolling from side to side with every wave. For three days and nights, we rolled every 6-8 seconds. We did not get sick, and managed to tolerate the conditions, but by the time we arrived in Bonaire, just after sunrise, we were weary and eager for rest.

Can we even stay here?

A potential issue when arriving in Bonaire is whether you will find an available mooring ball in the small designated area in front of downtown Kralendijk. Anchoring is strictly prohibited, so if no moorings are available, you have to get a slip in the marina. If the marina is also full, you are out of luck and must continue sailing to another country.

We had been stressing over the mooring situation for quite some time because we had friends that had to skip the entire island when there was no room at the inn. Bonaire is the Caribbean diver’s paradise, so skipping it would have crushed our spirits. But, alas, Poseidon was smiling upon us and several moorings were free. We realized our fortuitous timing when other boaters told us that just the previous morning, several sailboats were patrolling the area like buzzards waiting for someone to leave. It seems that the good weather that brought us here also encouraged other cruisers to head west. With exhausted glee, we tied up ¡Pura Vida! to a mooring, raised the yellow quarantine flag, and went to bed. 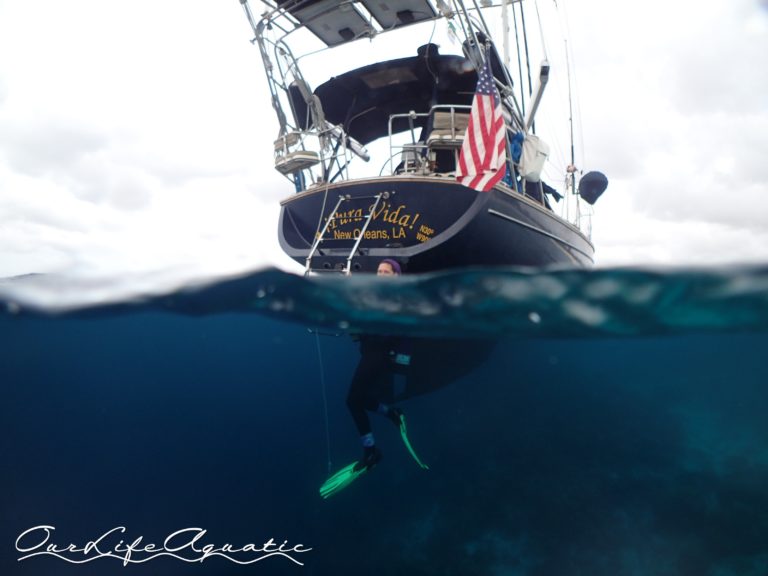 Day mooring for diving only at Klein Bonaire

We had arrived! Since we got certified as open water divers in 2000, we have been dreaming of Bonaire. We had heard the tales from other divers that sounded like fables. Bonaire! Clear, warm waters. Bonaire! Reefs so thick they looked like forests. Bonaire! Marine life so abundant that you bump into fish. Bonaire! In our minds, this legendary island became a mythical amalgam of the Garden of Eden, the promised land, and Atlantis. We had arrived! 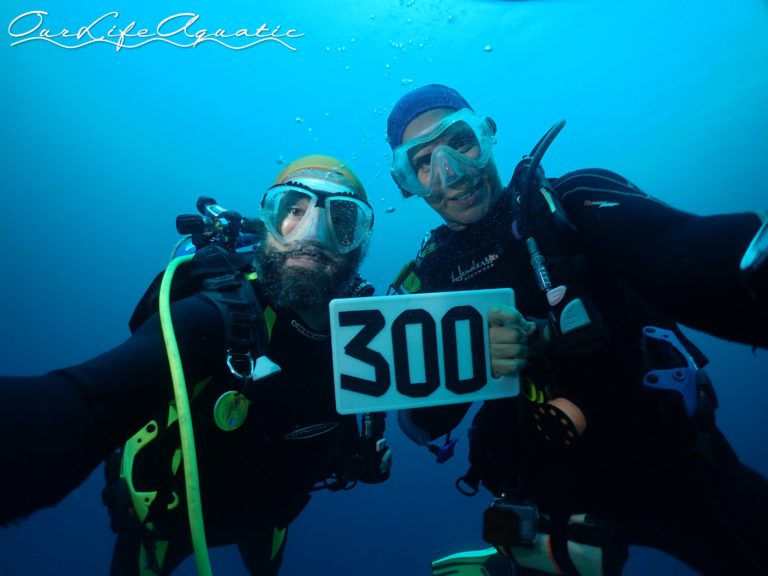 We dove so much we reached our 300th dives!

Over forty years of strict conservation and marine advocacy has paid off. The reefs that surround Bonaire are some of the healthiest we have seen; especially for an area that has so much diving tourism. We were so eager to get underwater, that we just jumped in right off the back of our boat. We were not disappointed. Directly behind ¡Pura Vida! the reef drops off from thirty feet (nine meters) to well below recreational diving depths. We had an underwater garden right below our home! 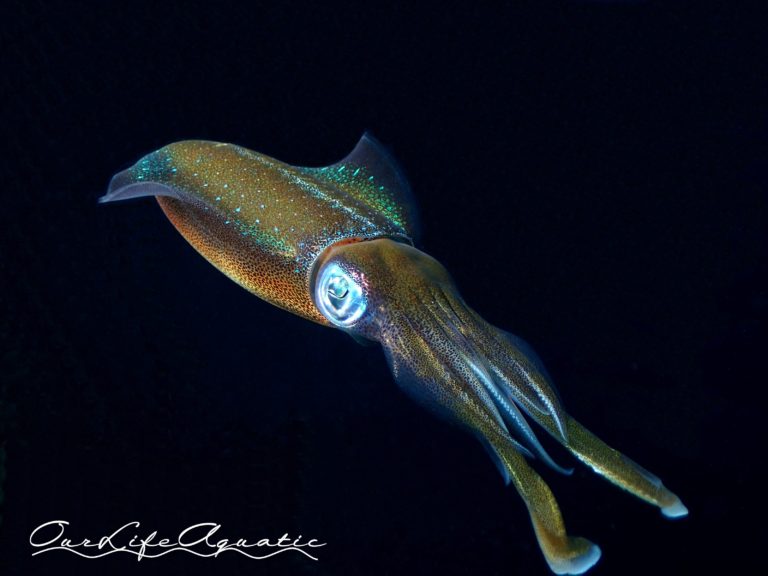 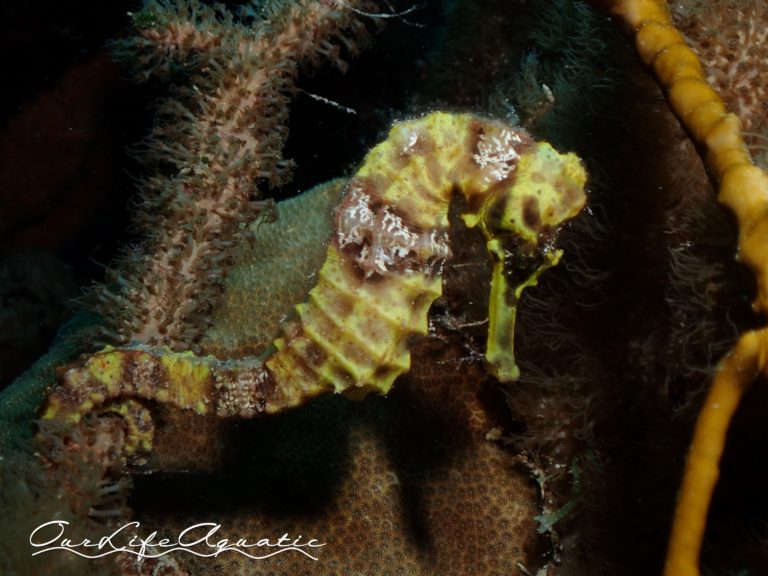 Spotted Moray in a sponge

Click here to see our complete collection of underwater pictures

Yes, some of the tales are true. The coral is thick. The water is relatively warm (80°F). And, occasionally, fished bumped us and even snipped at us to protect their territory. Because hunting is prohibited, the marine life has become quite accustomed to humans, and will come right up to your mask to check you out. This is fun when it’s a feisty Damselfish or a curious Porcupinefish, but it is quite unsettling and exhilarating when it is a four foot long barracuda or a huge tarpon emerging from the dark on a night dive.

We even did a workshop with world-champion free diver Carlos Coste at Deep Sea Freediving. He is an amazing teacher and coach. By the end of the day, we were reaching depths we thought impossible that morning. 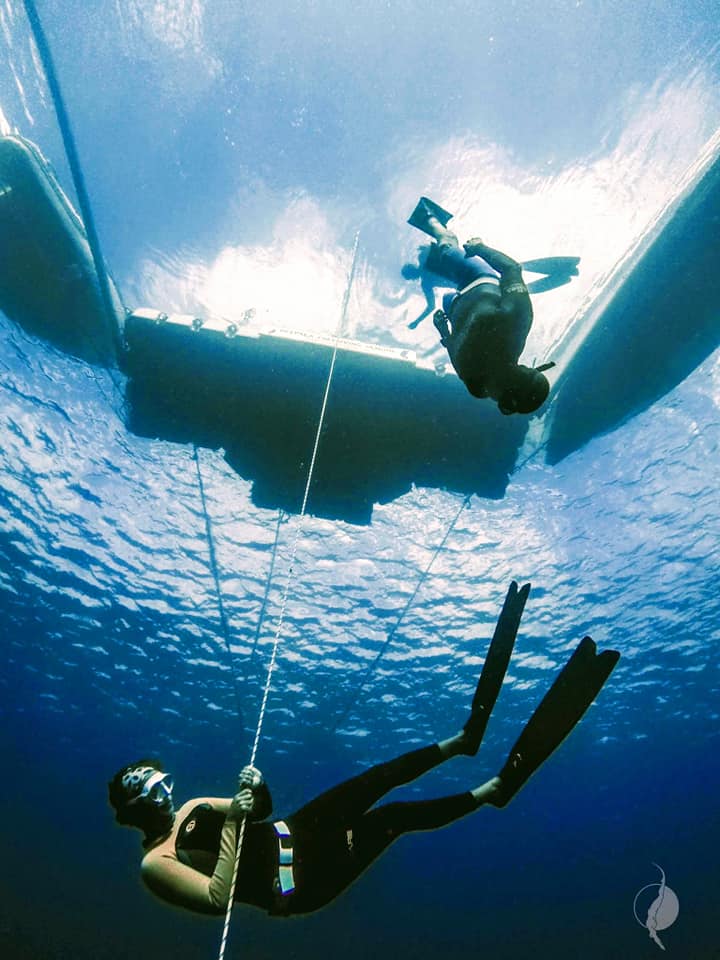 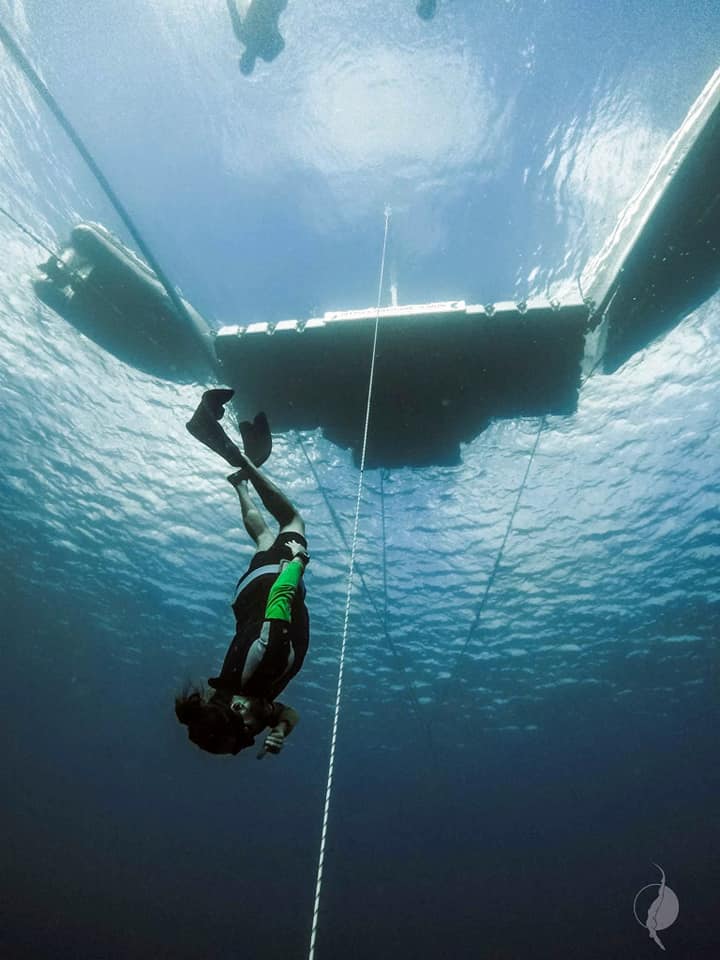 Working on proper form on the way down (Photo credit: Deep Sea Freediving)

Wait, there’s stuff on land too! 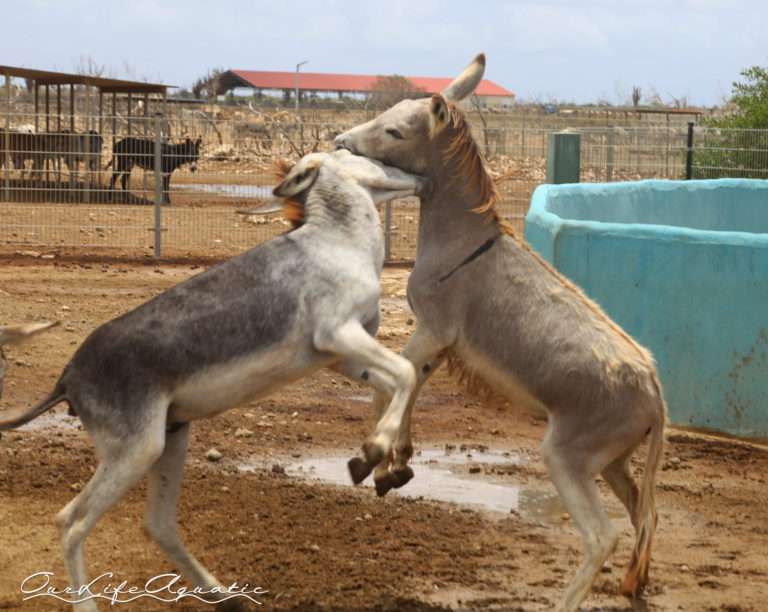 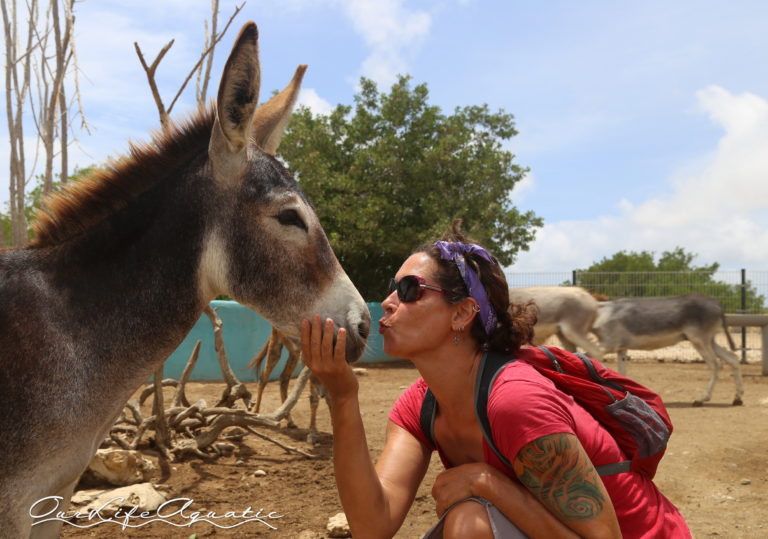 After our initial diving exuberance, we took some time to explore the wonders of Bonaire above the water. Some of the highlights of our touring include a donkey sanctuary and rehabilitation center, the expansive salt flats, a national park that encompasses then entire northern third of the island, ponds full of wild flamingos, and a distillery where they make liquor from cacti.

These tiny, sweltering slave huts are a vivid reminder of Bonaire's brutal past

Ruins of a lighthouse keepers residence 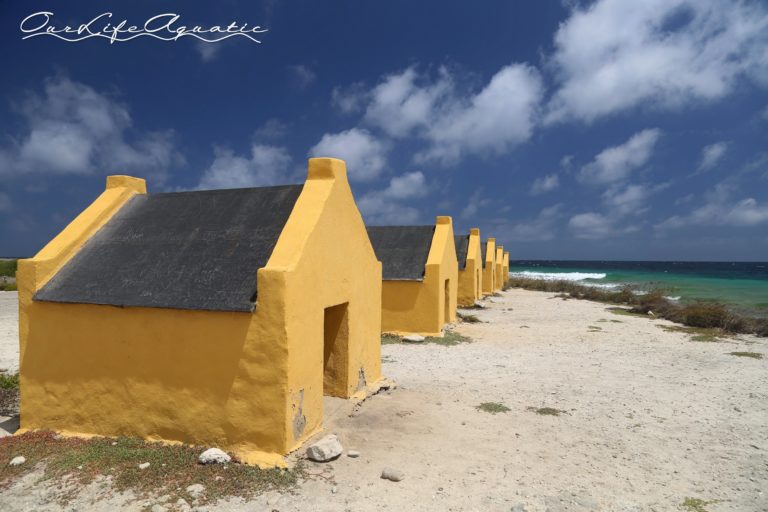 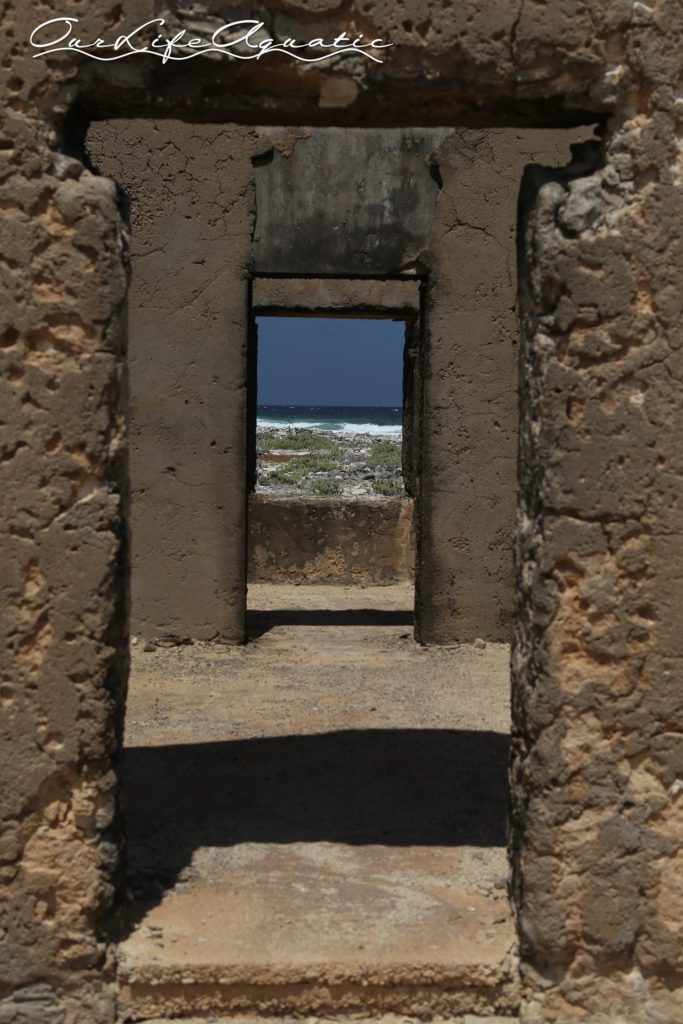 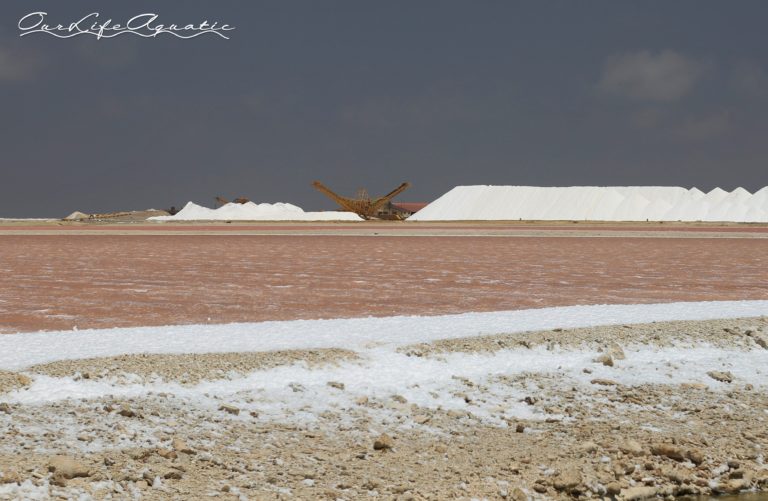 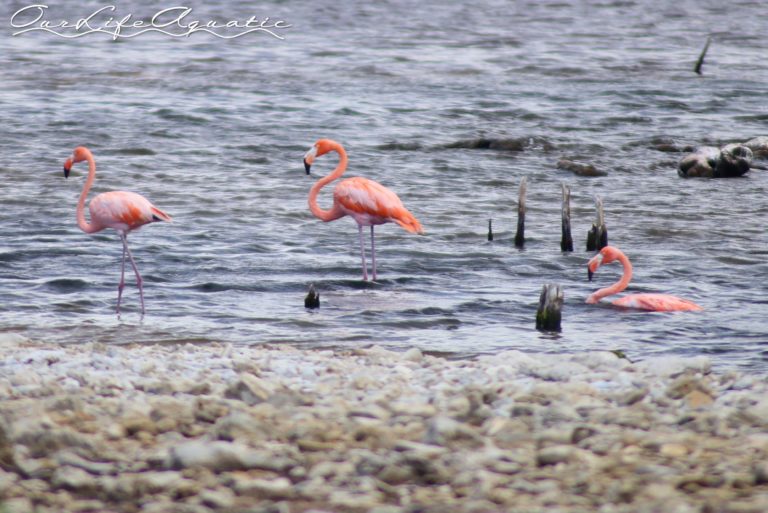 That same algae is what gives the flamingos their color 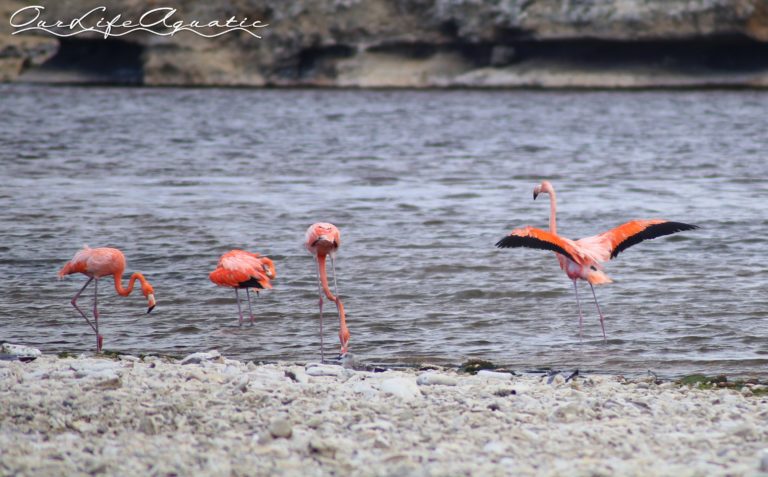 Bonaire’s arid landscape is strikingly different from the lush, green islands of the Eastern Caribbean. But leave it to human ingenuity to make spirits from what you have in abundance. Here, it’s the Cadushi cactus. It grows everywhere – and it’s delicious in rum and vodka form. 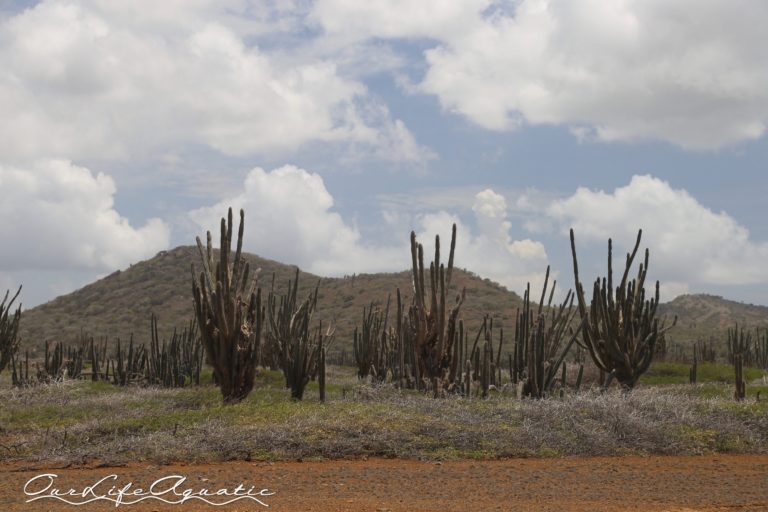 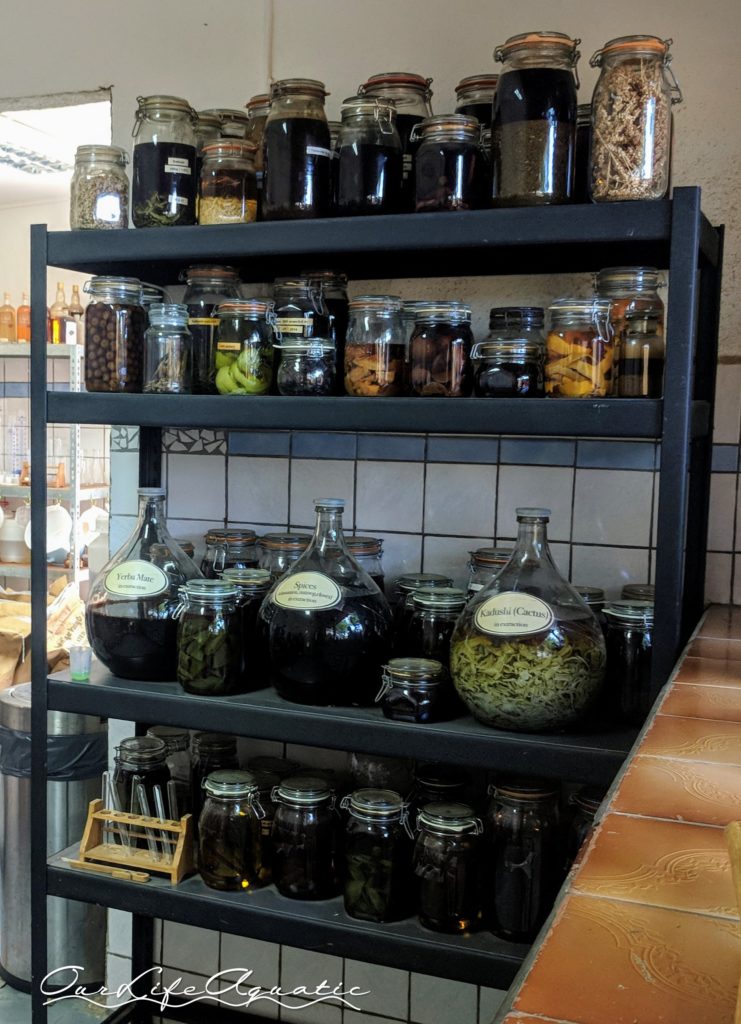 Many local ingredients used by Cadushi

We were also happily surprised at the variety of restaurants. For a relatively small town, Kralendijk has quite the international flare of eateries and watering holes. We tried our best to sample as much as we could; in the name or research, of course. 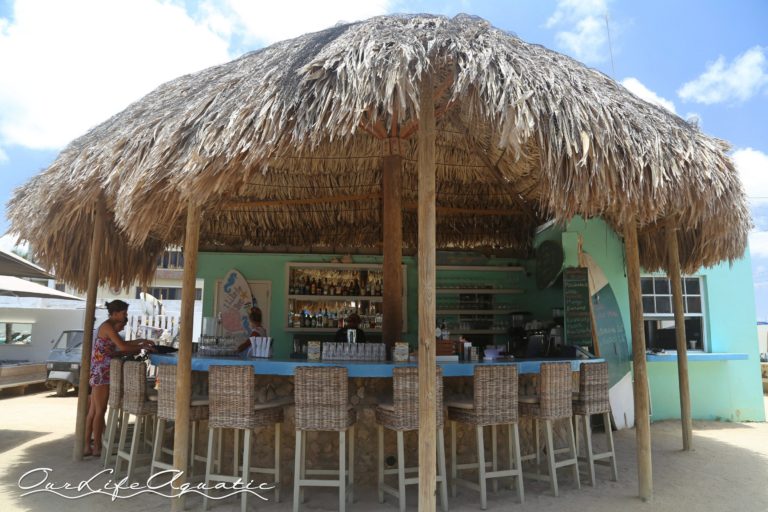 One of our favorite post-dive watering holes 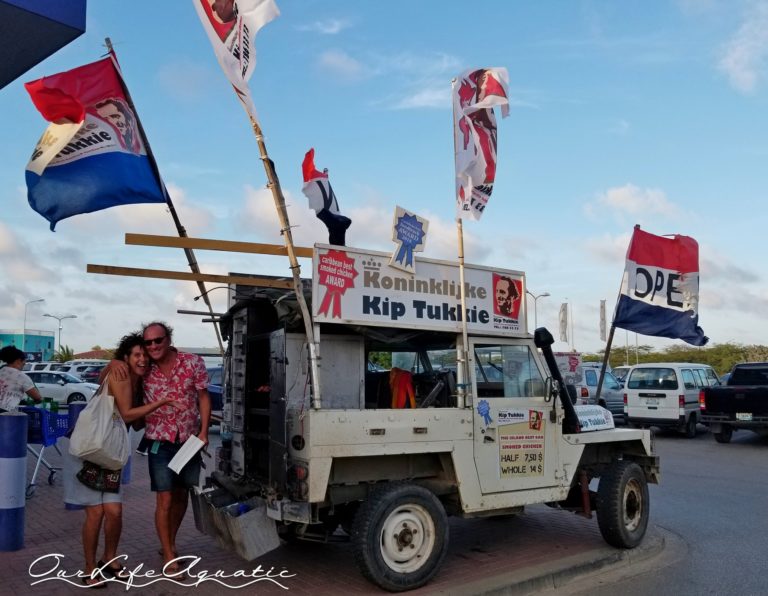 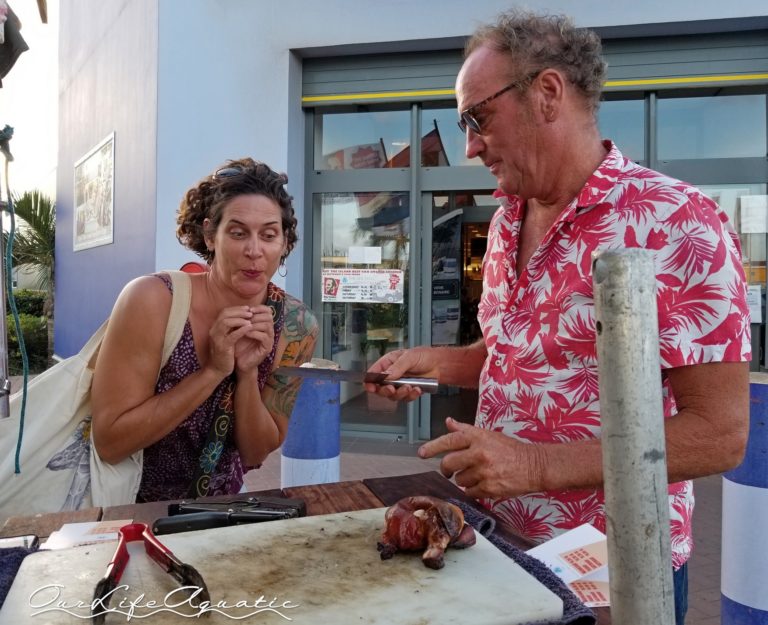 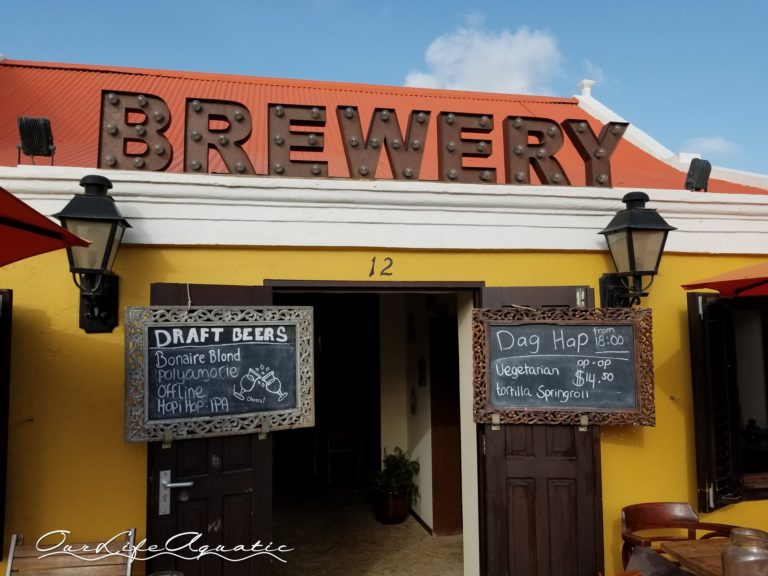 There's even a brewery!

Our month in Bonaire flew by, but we made the most of it. We improved our photo skills with the help of some new gadgets, we spent more time underwater than we have in ages, and we furthered our diving education. As they say in the Dutch Caribbean, our time in Bonaire was “dushi!” 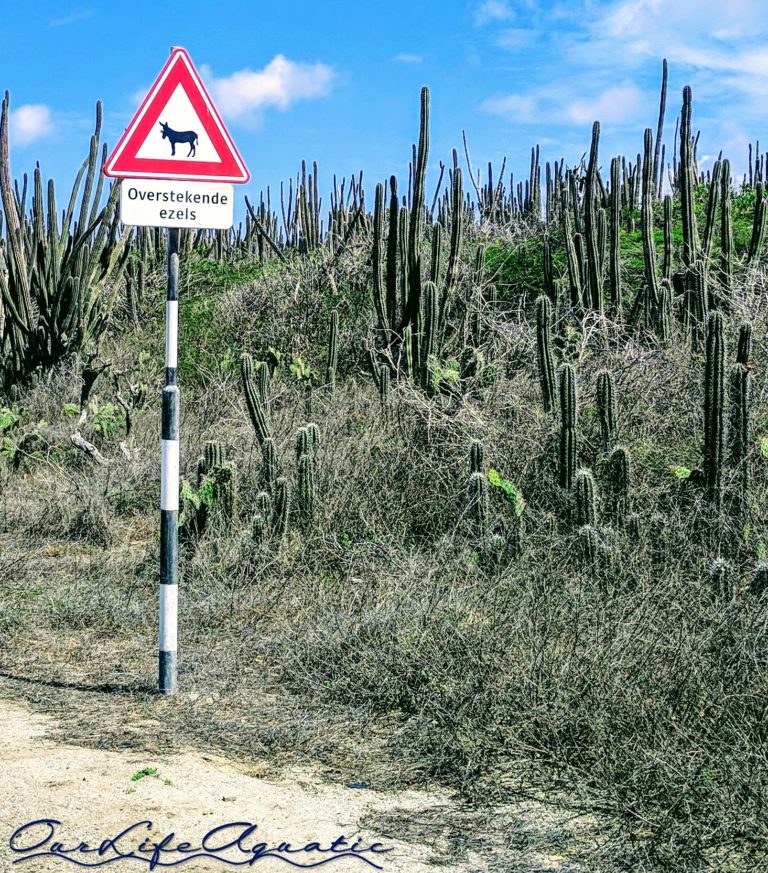 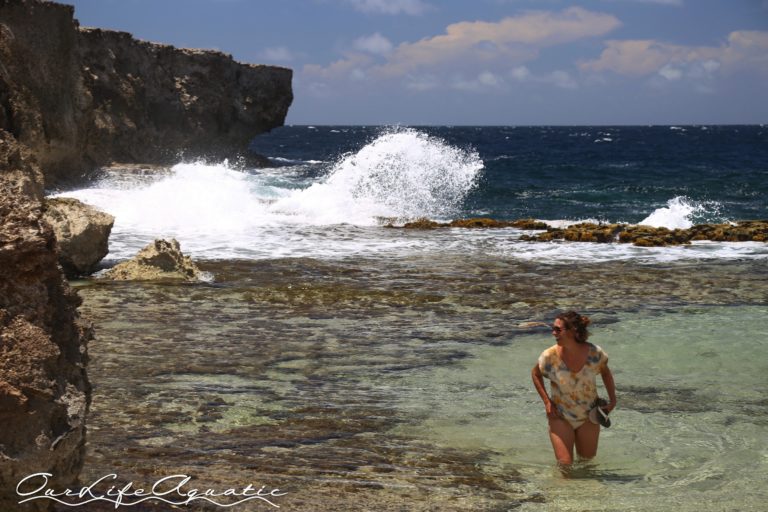 One of the few areas for swimming on the north coast 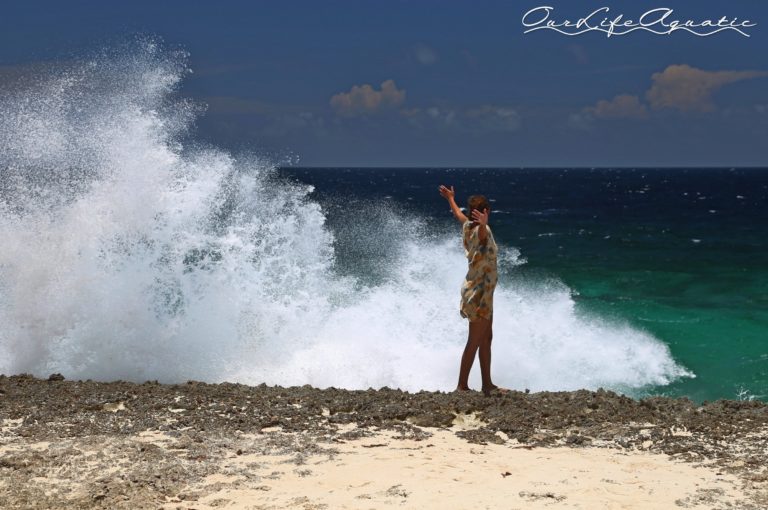 Most of the coast is quite rugged 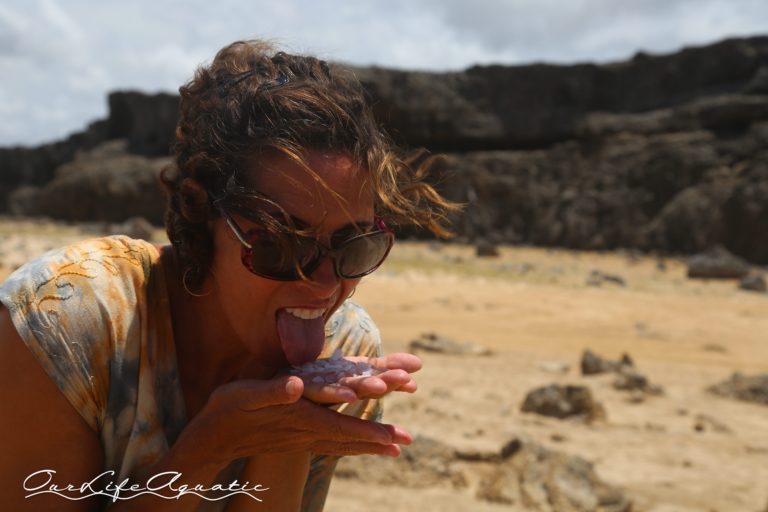 Delicious salt, right on the ground! 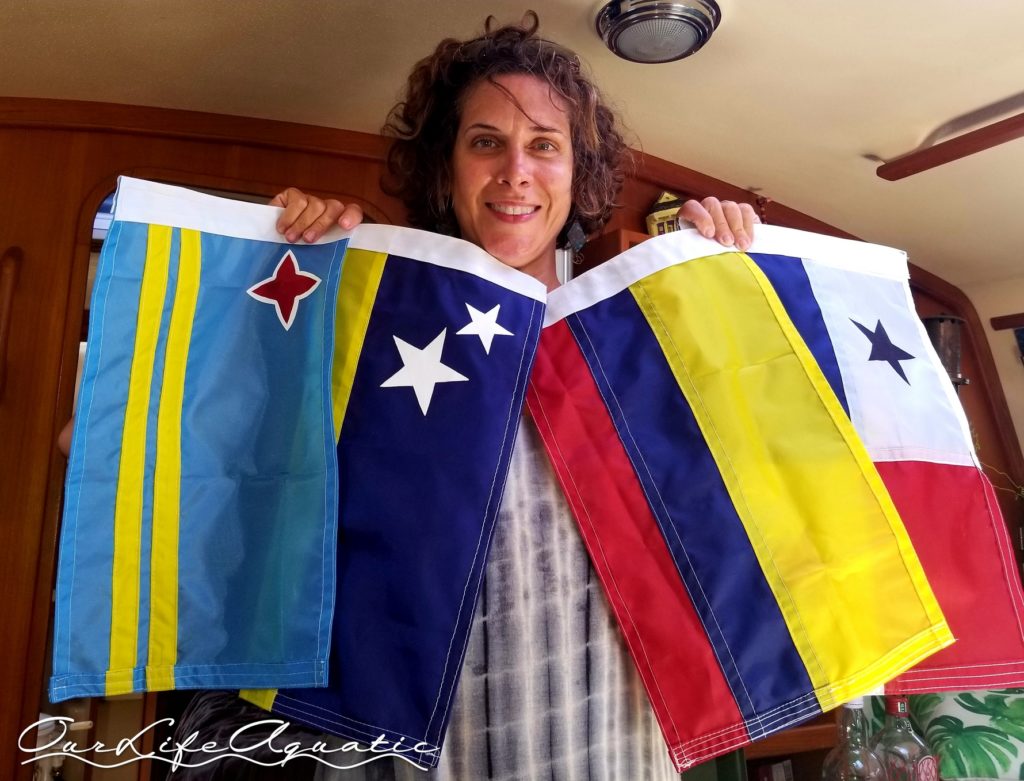