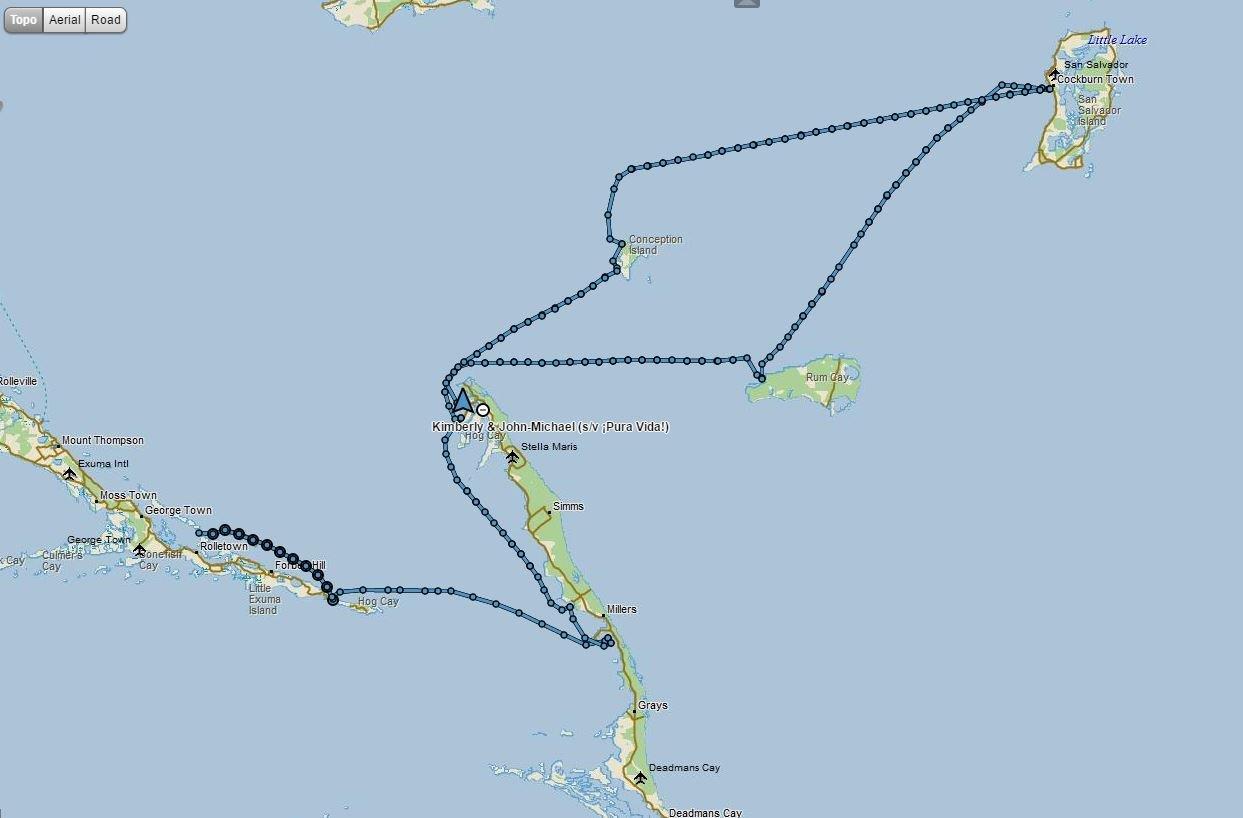 The “out islands” is a term generally used in the Bahamas for describing the multitude of islands east and southeast of Great Exuma that used to be off the beaten path for most cruisers, but are now excellent destinations for those venturing beyond the comforts and safety of Georgetown. Some islands, like Long Island, Rum Cay, Conception Island, Cat Island, and San Salvador are not remote in terms of distance – most are just a day sail away – but they are definitely isolated because of the lack of all-weather safe harbors and availability of services. More recently, their isolation was amplified by the devastation of Hurricane Joaquin in 2015.

These islands lure cruisers with the promise of secluded anchorages, a break from the incessant buzz of Georgetown, pristine beaches and mangroves, unspoiled coral reefs, breathtaking underwater walls for diving, close-knit villages that seem to take you back in time, and self-reliant locals that welcome visitors with open arms. With the exception of Club Med in San Salvador, there are no mega-resorts or cruise ship terminals in the out islands. All this sounded perfect to us.

We only had three weeks before we had to meet visiting friends back in Georgetown and we did not want to rush through these beautiful destinations, so we decided to visit the closer northern out islands first and save the southern and most remote ones for later, when we are ready to head south and leave the Bahamas.

Our first stop was in the settlement of Salt Pond, Long Island. Initially named “Yuma” by the Lucayan Indians, later renamed “Fernandina” by Christopher Columbus in 1492, it was later, and aptly, renamed “Long Island” by a sailor who was impressed with the 80 mile length of this very thin island (only 4 miles at its widest point). Although it is a very small community, it has a weekly farmers market where you can get local produce, crafts, bread, and other goodies. This is also where we discovered the delectable flavor of whelk, a large sea snail that tastes stronger than conch and has a rubbery texture. We later found some on the rocky shores and harvested them ourselves. A lot of work for a little piece of rubbery meat, but a fun experience.

On the northern end of Long Island is Calabash Bay, a stunning harbor surrounded by flour-soft, white powder beaches on three sides, and a lively shallow coral reef on the west.

Here we linked up again with Christine and Scott from m/v Conchy Tonkin’ and begged them to bring their puppies to the beach so we could get our dog fix. Many cruisers have little lap dogs, but Jack and Maggie are our kind of dogs: big and playful. We were sad that we were only staying there for two nights.

The next island stop was Rum Cay. This island has an even smaller population, and most services are still down from the hurricane. Rum Cay has no harbors with all-weather protection, so you have to pick an anchorage based on the prevailing winds and move if the wind shifts direction. We chose an uninhabited bay on the north side. While the bay is large, it is dotted throughout with coral heads that rise to just below the surface. To get inside the bay, Kimberly had to stand at the bow and guide me to steer around the minefield of rocky coral to find a large enough sand patch to anchor the boat.

The positive aspect of all this coral is that we could go spearfishing and lobstering right off the stern of Pura Vida. Lobster season was ending in just a couple of days, so we had to stock up. The sea did not disappoint; we caught the largest lobsters we have seen to date, gathered a few enormous conch, and also speared some grouper and lionfish.

A fellow cruiser told us about a cave just a couple of miles up the coast of Rum Cay that is a world heritage site because of Lucayan Indian petroglyphs. These carvings were made over 500 years ago, before the entire Lucayan population was wiped out by Europeans. We could not pass this up. We beached Lagniappe right outside the cave and went exploring.

The weather was changing, and it was time to move again. We took advantage of the north winds from an incoming front to sail to San Salvador. This is the most remote of the northern out islands and one of the hardest hit by Hurricane Joaquin. We were not sure what we would find. We were surprised when we anchored off the main settlement of Cockburn Town to see a lot of cars and people moving about, and cargo ships coming and going from the small government dock. The town was alive with rebuilding activity, and the locals were thrilled to welcome visiting tourists.

Although we had stocked up before coming here, we wanted to check out the local wares. We dinghied ashore and asked a couple of men who were having their lunch by the marina if they could point us to the nearest grocery store. They insisted that they would drive us there since it was a very long walk. (It wasn’t.) The rest of the day was a whirlwind of activity and sightseeing as these two gentlemen – Brian and “Paps” – “adopted” us, and said it was their duty to show us the entire island, and introduce us to as many of its inhabitants as possible. 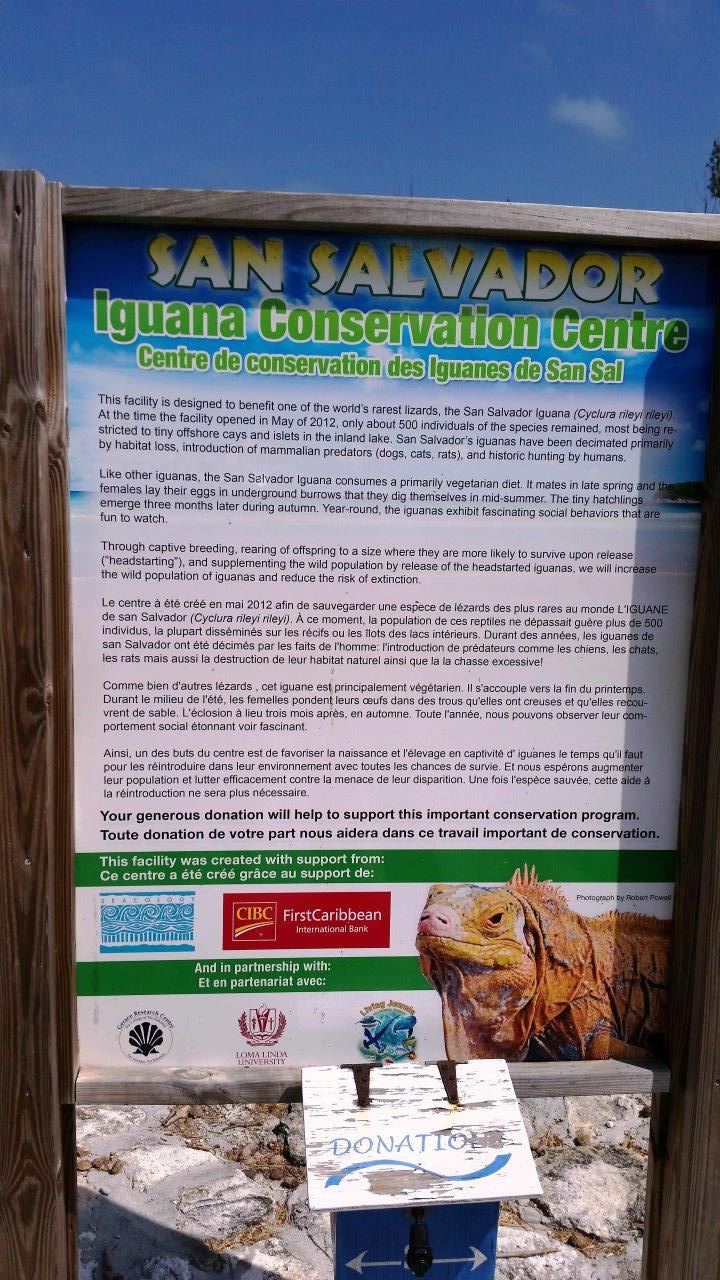 We saw everything from the artificial glamour of Club Med, to a marine research facility and iguana sanctuary, to a dingy road-side shack bar, and so much more. At the latter, we met four generations of a beautiful local family run by its matriarch, Ms. Edna. She was proud to give us a tour of her home and show us the pictures of all her twenty-four “grands”.

The whirlwind tour of the island continued as “Paps” got progressively more inebriated and animated. He philosophized non-stop, mostly incoherently, at the top of his lungs, about the nature of the universe. He told us how he was born under the sea, was currently alive in both human and tree form – he even showed us the tree – and built pretty much every structure on the island by hand. He allegedly played Carnegie Hall once. He was entertaining to say the least.

Later in the day, he picked up his guitar and serenaded us by the seaside with a song he made up on the spot about us. He played guitar with only one hand and said that was ok since the guitar only had five strings. Made sense to me!

Brian continued to introduce us to more island residents, including Stefan and Tommy, who are building a mansion to die for overlooking the rocky shores from high on a cliff. Like everyone else we have met in the Bahamas, Stefan and Tommy welcomed us like we were family. Did I mention they are building this mansion by hand themselves? Impressive!

The following day Brian picked us up for a boat tour of the inside ponds of the island and the Atlantic shore. Ten of us piled into his skiff for a full day of exploration and hiking to spectacular summits with a 360° view of San Salvador. This amazing day was topped off by Stefan inviting us all back to his house for a dinner prepared in his gourmet kitchen with ingredients from his personal greenhouse.

The night got a little crazy after that as Brian took us bar hopping around the island until we begged him to take us back to our dinghy around 4 am. We were exhausted and ready to get home to Pura Vida.

We had already been in San Salvador two days and not gotten in the water once…and we came here to SCUBA dive. Luckily, there was a diving mooring just a few hundred yards from where we anchored. After sleeping off the previous day’s exhaustion, we finally hopped in the water and descended about 70 feet to one of the most spectacular wall reefs we have ever seen. The entire dive was spent in the company of two very curious reef sharks that kept circling us. We suspect that the dive boat from nearby Club Med feeds them to entertain their customers because these sharks were not shy, and seemed to be looking for a handout.

Once again, our schedule and the weather forced us to get underway to start heading back to Georgetown. But we had one more dive stop before our arrival, Conception Island. This uninhabited island is a marine reserve, and renowned for its lush reefs and wall dives. Conception did not disappoint above or below the water. We had a crescent-shaped beach all to ourselves, hiked along rocky outcroppings full of snails, dinghy-toured the estuary at the center of the island that was full of turtles, and saw stunning underwater reefs that nearly took our breath away. We were also accompanied by sharks here, but unlike the San Salvador sharks, these kept their distance and would move away if we got too close. 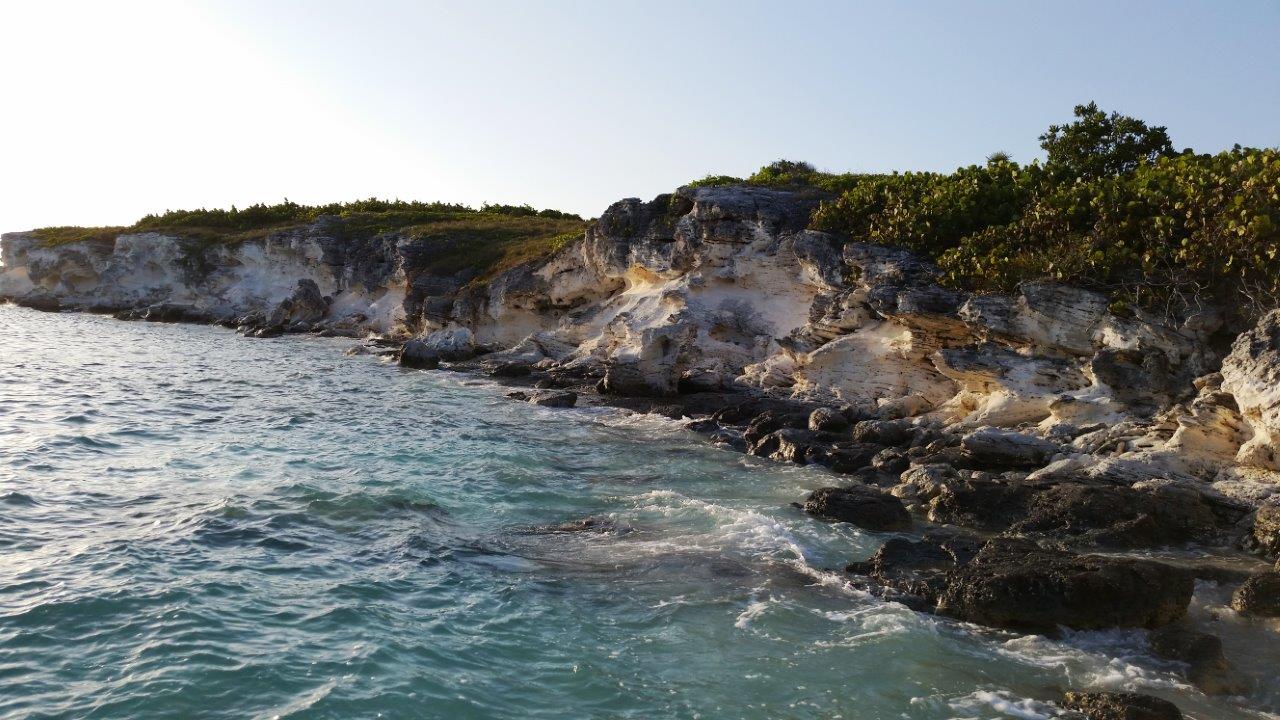 We reluctantly left Conception Island to head back to Georgetown, but the weather was on our side and we had to take advantage of the window. During our entire time in the out islands, the wind had been perfect, and we were able to sail every passage without the motor. We made a quick overnight stop in Long Island and returned to the now familiar waters of Elizabeth Harbour with plenty of time to restock and get ready for our friend, Ashley, to join us for a few days aboard to celebrate her thirtieth birthday.

When we first envisioned our Bahamas cruising, we never expected we would backtrack. Keep moving. Always seeing new places. Never look back. The reality is that some places are worth revisiting, and sharing them with friends is truly special. We’re thrilled that Ashley chose to spend her special day with us, and now more friends are coming to join us. We’re eagerly awaiting their arrival.