We thought we were, pretty much, done with Antigua after exploring the north and west coasts of the island over a three week period. We thought wrong. We knew there was much more to enjoy, both in and out of the water, but our goal was to get to the south coast where we could wait for a good opportunity to sail to our next island destination, Guadeloupe. While waiting for that weather, we ended up with enough time to check out both Falmouth and English Harbours, normally two of the busiest ports on Antigua. Lucky for us, busy season was over.

There’s nothing like arriving in a new bay and finding plenty of room to drop your hook. Falmouth Harbour is large, but this usually crowded anchorage was surprisingly empty. We soon found out the same applied to “town”. After eagerly dingying ashore, we were reminded that busy season has its perks.

By June, Falmouth is a ghost town. Most of the restaurants and bars were closed, and we didn’t encounter any other cruisers with whom to socialize.

We also struck out on having laundry done, but we at least found a small market and wine shop!

As a bonus, it’s mango season! We stocked up on a dozen super ripe and juicy ones.

Still, Falmouth was boring, so we moved after a couple of days to English Harbor. What a difference two miles make!

After a beautiful restoration, Nelson’s Dockyard in English Harbour looks much as it did when it was built in the late 1700s as a British naval station. Horatio Nelson was in charge here after his commander put his own eye out while chasing a cockroach with a fork. (Note to self: Stick with Raid)

Also mostly cleared out of boats for the summer, the mangrove-lined inner bays that make up English Harbor offered many anchoring possibilities, and are a prime location for tying a boat up to the trees in a storm. 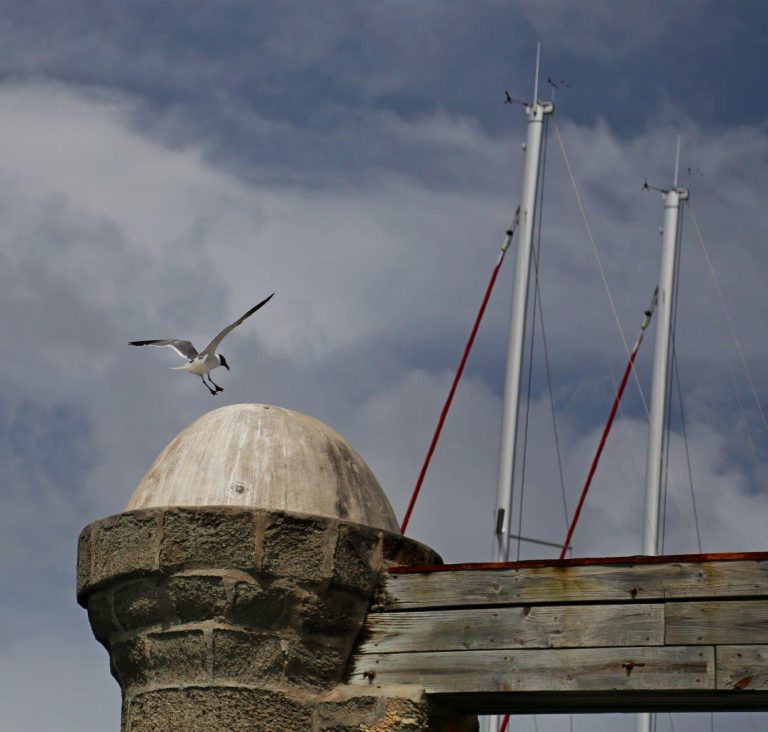 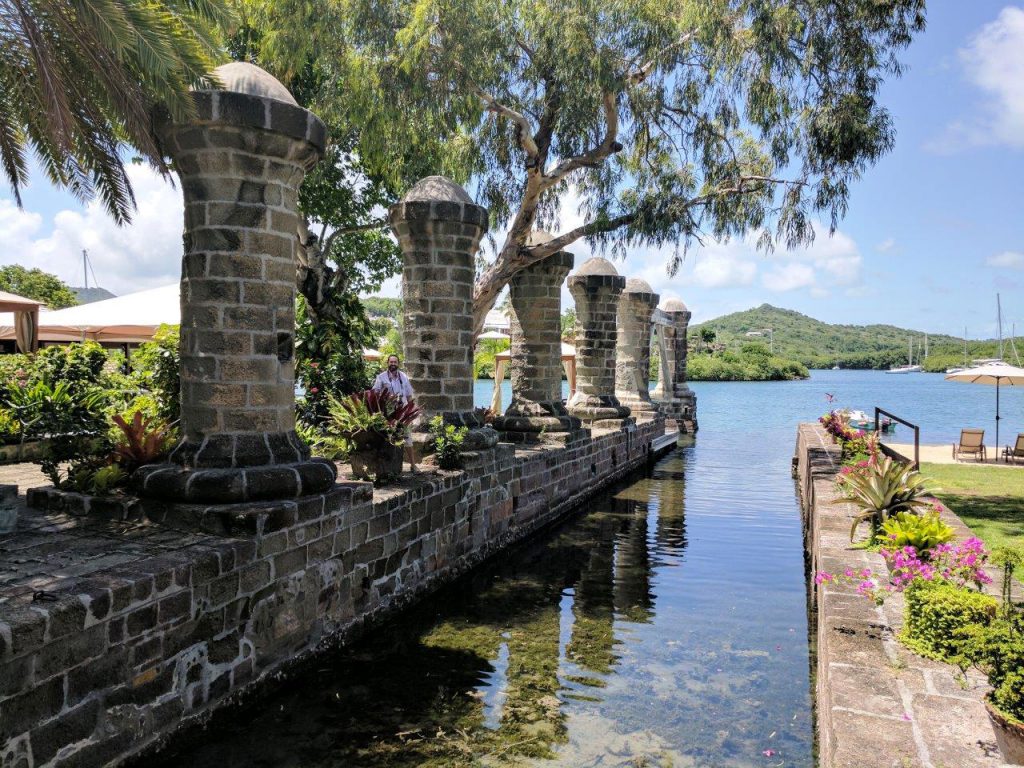 The pillars that once supported the sail loft above.

With a couple of days to kill before our passage south, we set out to make the most of this historic, picturesque site. 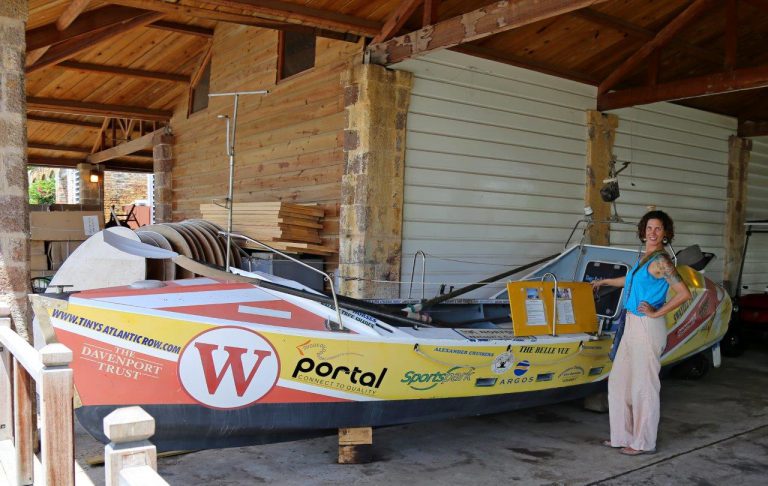 This boat was rowed by one man across the Atlantic to Antigua! 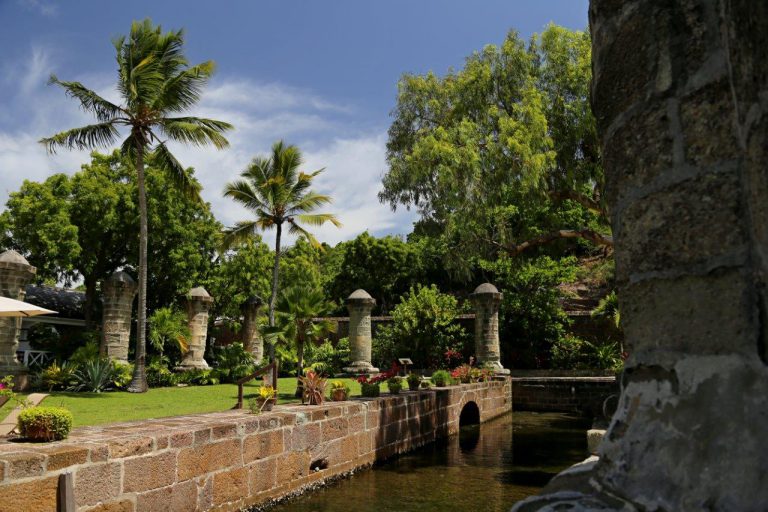 The gardens at English Harbour are exceptionally pretty. 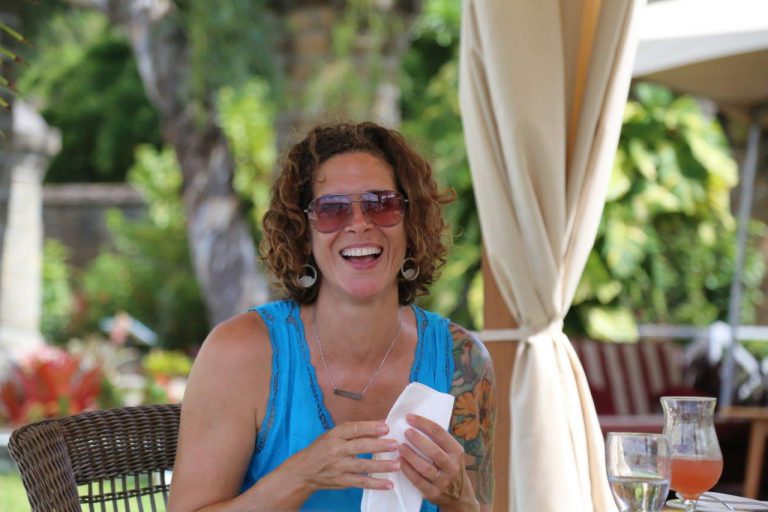 Doing what we do best!

Feeling adventurous on our last day, we decided to attempt the one mile, 500 foot elevation, hike to the top of Shirley Heights, which friends recommended. Though the path up was mostly shaded, I thought I was going to die before I staggered to the top. My favorite hiking pants ripped, we didn’t bring nearly enough water, and I was famished. By the time we reached the summit I hated these friends. 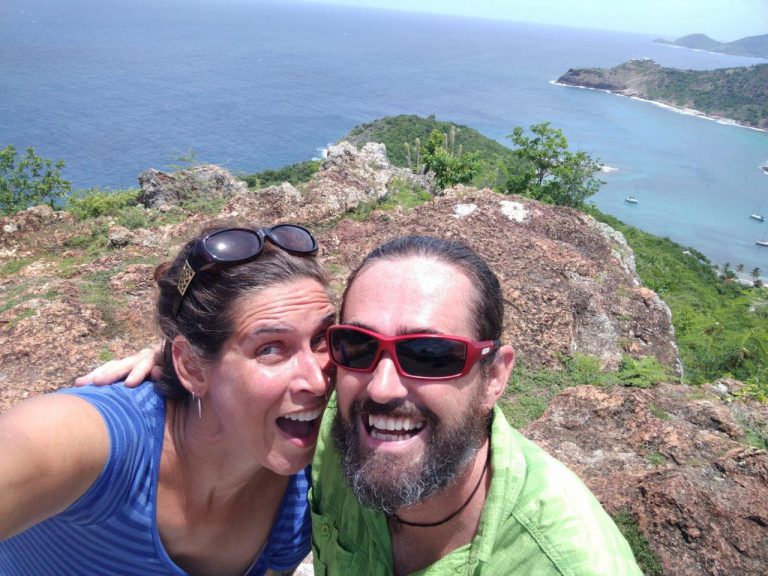 We made it alive! 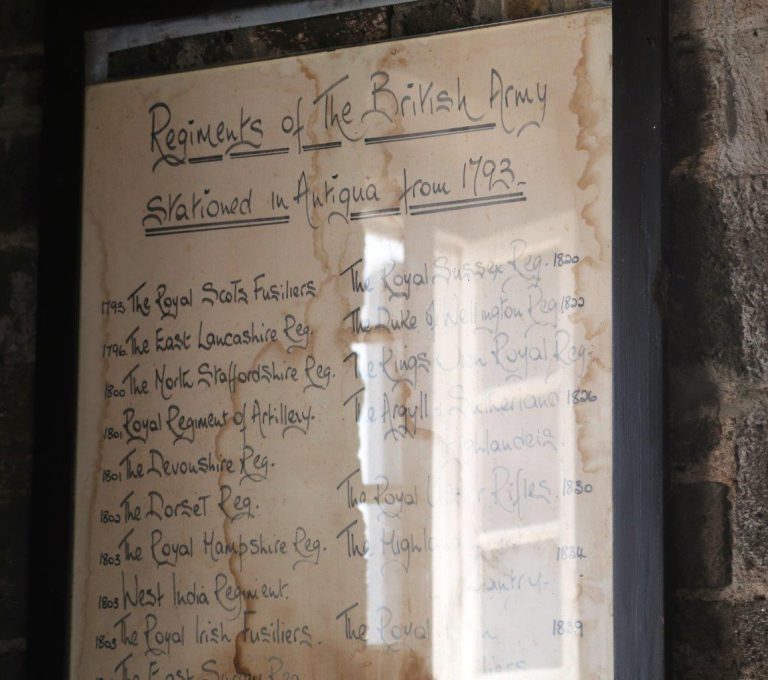 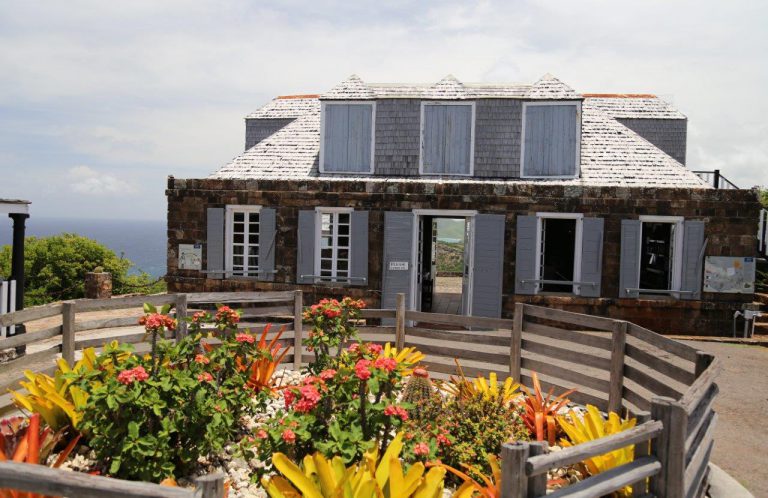 The old stone structures at the top of Shirley Heights were once part of a military complex. The bar/restaurant was the guard house.

Our bond was redeemed, however, when we found a bar and restaurant waiting at the end, and the view was spectacular.

We went a different way back down, with me cursing the whole time, but it was lovely. I have since sworn off hikes. 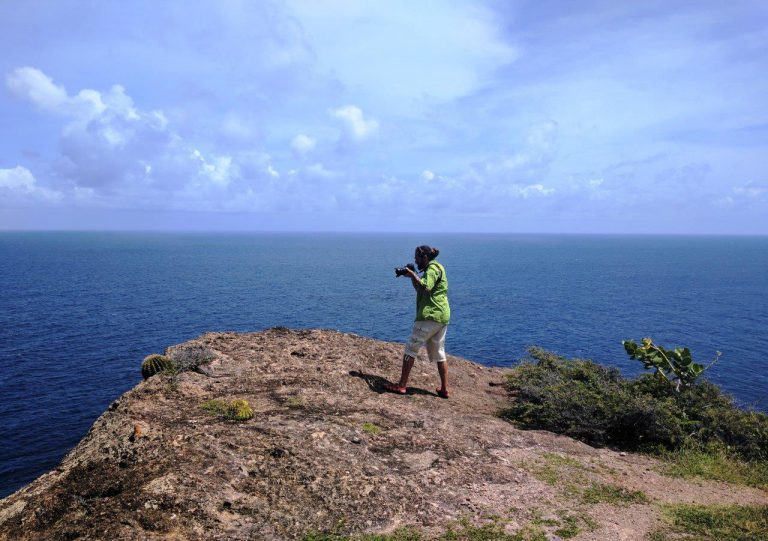 The photographer hard a work. and risking his life 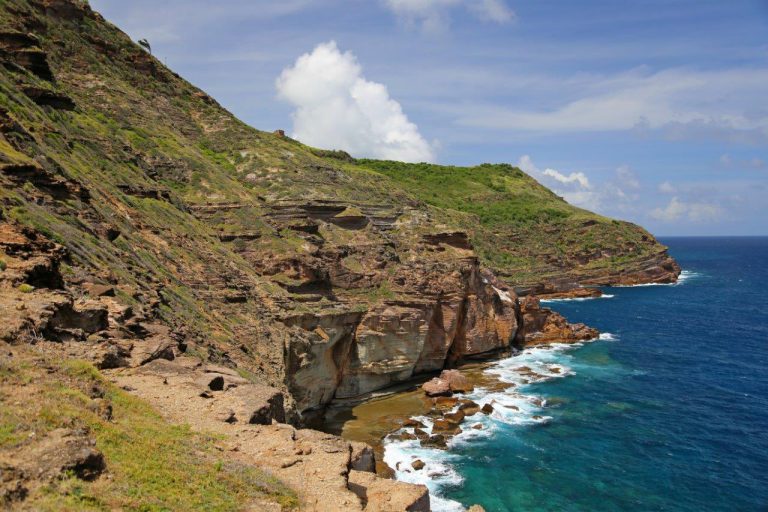 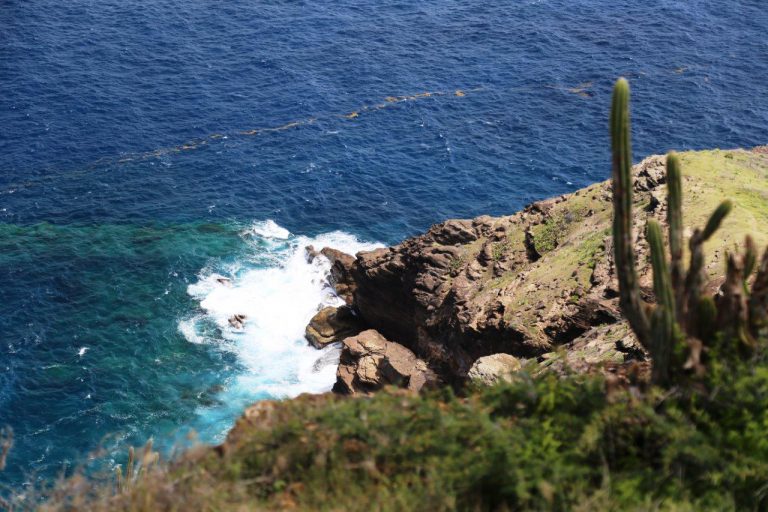 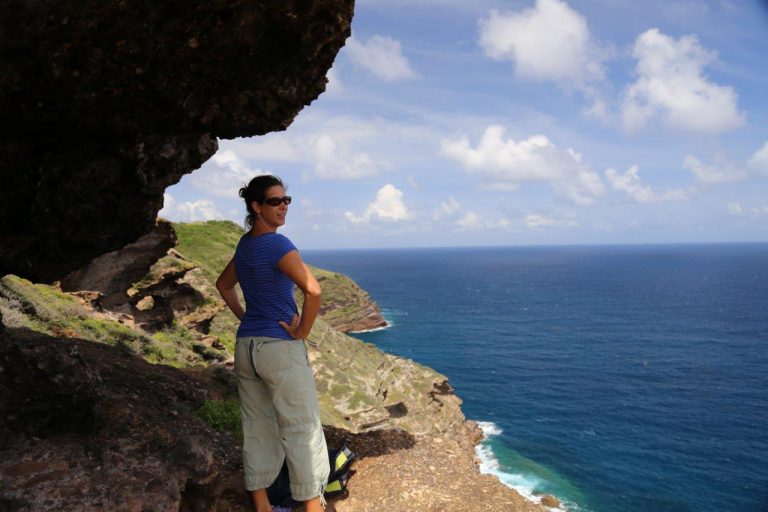 So glad I wore underwear! 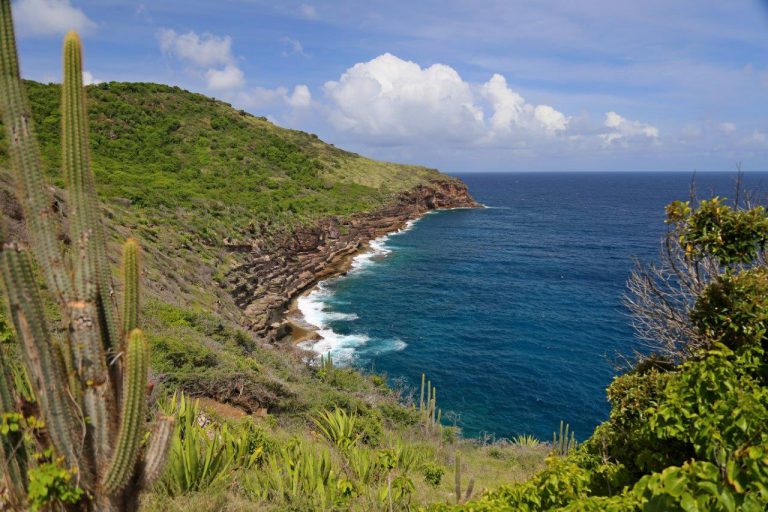 To reward ourselves for all that arduous land based activity, we took up a new water based one – stand up paddle boarding, because we weren’t torturing ourselves enough! A British couple anchored in English Harbour was offloading a lot of equipment in preparation for their return to land life. We bought two inflatable SUPs from them, and are just now learning how to use them. Check with us in a couple of months. We may have two inflatable SUPs for sale.

With three sides of Antigua checked off our island to-do list, we are left with the east coast, including Green Island, to explore on our next go round. As is quickly becoming our mantra as we zip down island to get below the hurricane zone, “There’s always next season!”

(If you’re a masochist, and wish to do the Shirley Heights hikes, below are some pics with notes to help guide you. Or you could be smart and just catch a cab.) 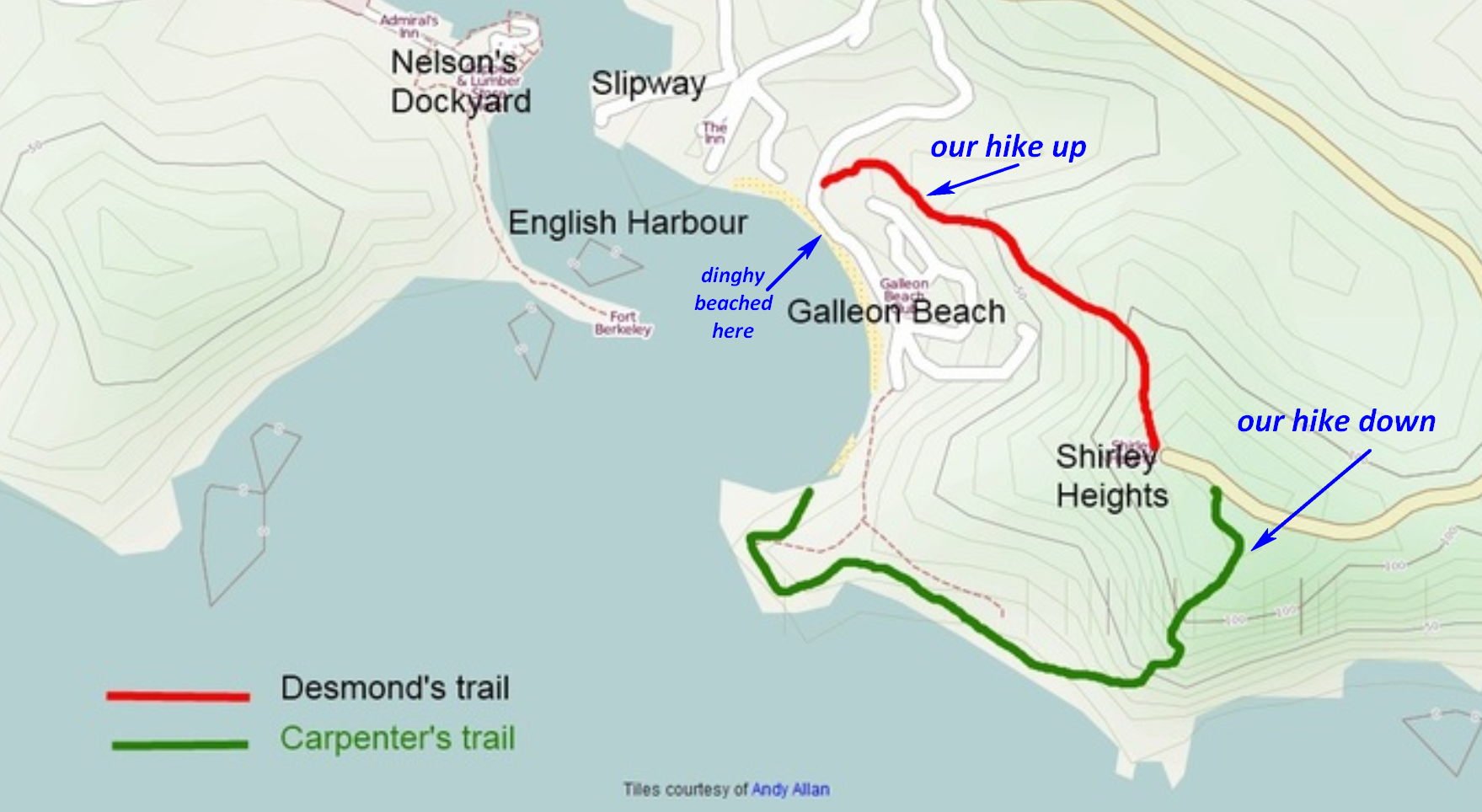 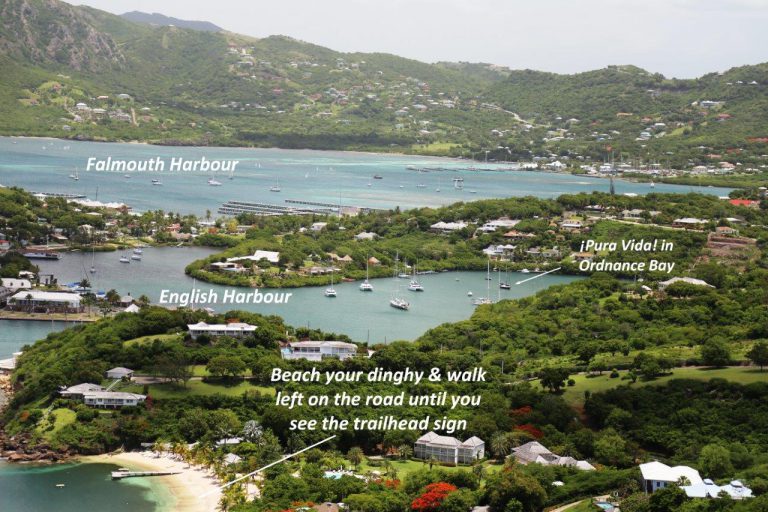 Down the road from the bar, you'll see a pole. Head towards it and follow the dirt road. 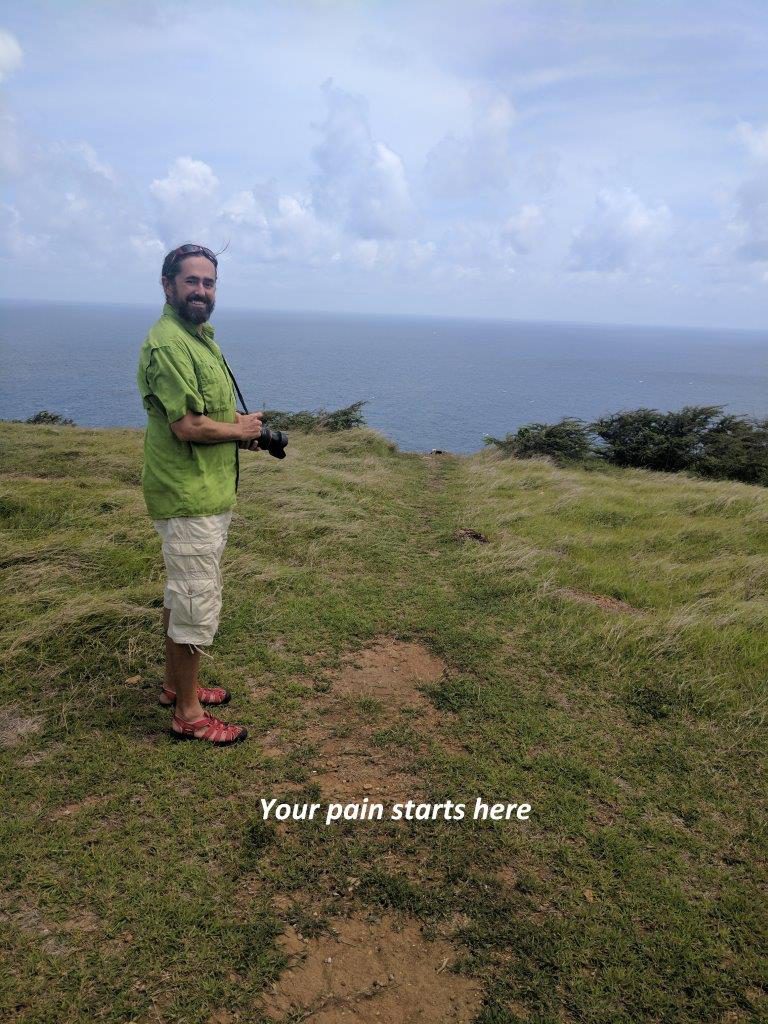 The start of the beach trail going down. 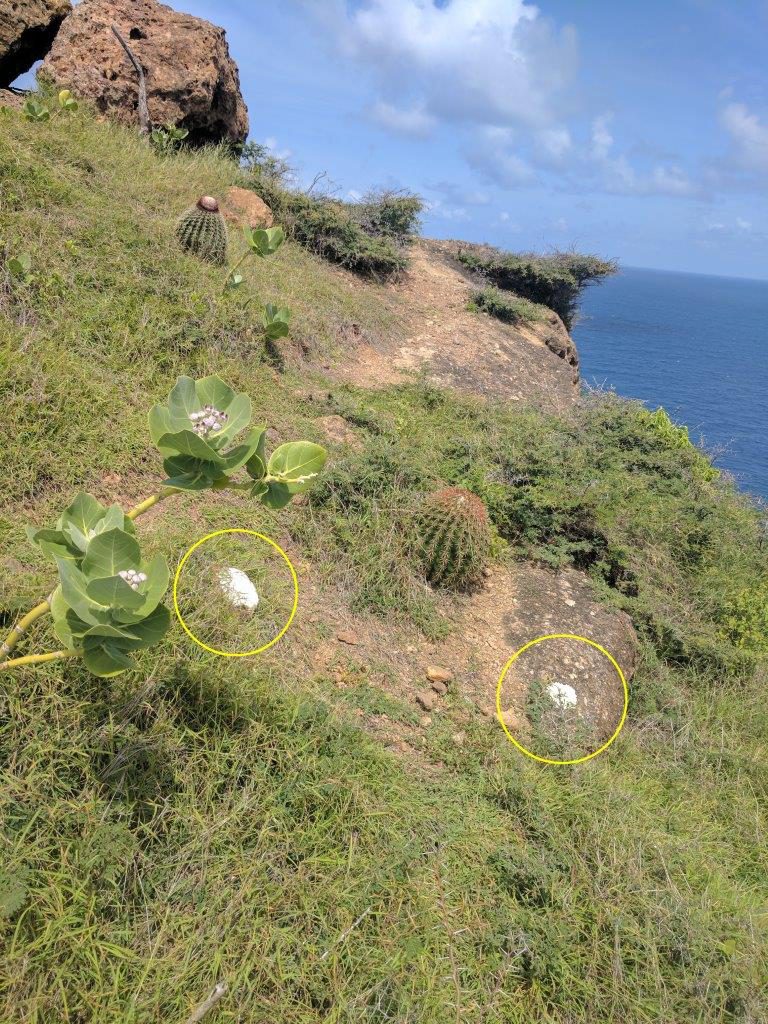