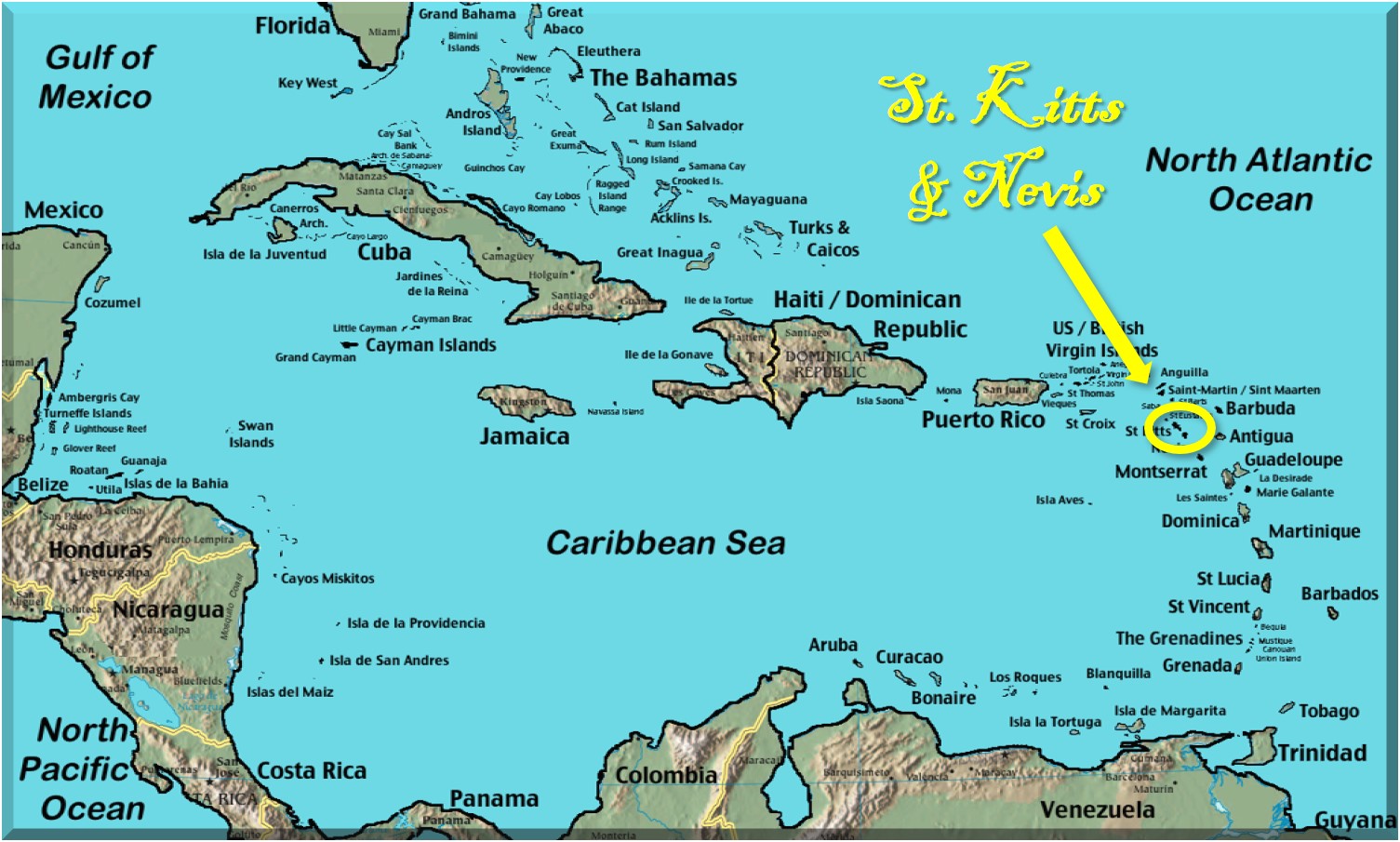 We were ready for a bouncy ride. The winds had been howling for days and the seas built up from the east, the direction we were headed. The winds were not letting up anytime soon, so we decided to go. It was only a 20 mile passage from Saba to Sint Eustatius (aka Statia), so it would not be a long day, or so we thought.

It was bouncy, all right. With the engine on and sails up, we zigzagged our way southeast, frequently burying ¡Pura Vida!’s bow in the waves. We even had some waves breaking over our cockpit, and rattling the boat rigging and our bones. But, it was only a twenty mile passage and we were almost there, or so we thought.

As we neared the only anchorage in Statia, our fears materialized. The heavy seas were rounding the island and creating enormous swell in the unprotected harbor. The local boats at anchor were being tossed like bath toys. We realized right away that, even if we were able to successfully anchor, we would not get any sleep in those conditions. We were also unwilling to go ashore and leave ¡Pura Vida! unmanned in a potentially dangerous environment. Staying in Statia was not a safe option. This was our second failed attempt at seeing Statia since we had to skip it last year because of rough conditions.

We chose to abort our plan to anchor in Statia and continue sailing toward our next destination, Saint Kitts and Nevis. It was already midafternoon, so adding 26 more miles to our trip would have us arriving well after sunset. Arriving at an anchorage in total darkness is something we try to avoid, but sometimes you just have to do it. Fortunately, we were familiar with the anchorages in St. Kitts and picked the one that would be easiest to approach. Finally, around 8pm, we dropped anchor in a very calm Whitehouse Bay, and collapsed our tired bodies in bed.

St. Kitts and Nevis is a small country that consists primarily of the two islands that give it its name. Last year we visited St. Kitts, so this time we opted to spend all our time in Nevis (pronounced KNEE-vis by the locals). We are so glad we did. From a distance and on a map, Nevis looks like an island that a child would draw. It’s round and has one large single volcano peak in the center that slopes down to the shores. The volcanic peak is almost always covered by clouds, creating the appearance of a snowy mountaintop. We learned that that is how Nevis got its modern name, when Columbus called it “Nuestra Señora de las Nieves” (Our Lady of the Snows).

We fell in love immediately! We moored ¡Pura Vida! a few hundred yards from a gorgeous sandy beach full of small eateries and bars, and just a short dinghy ride away from the capital, Charlestown. 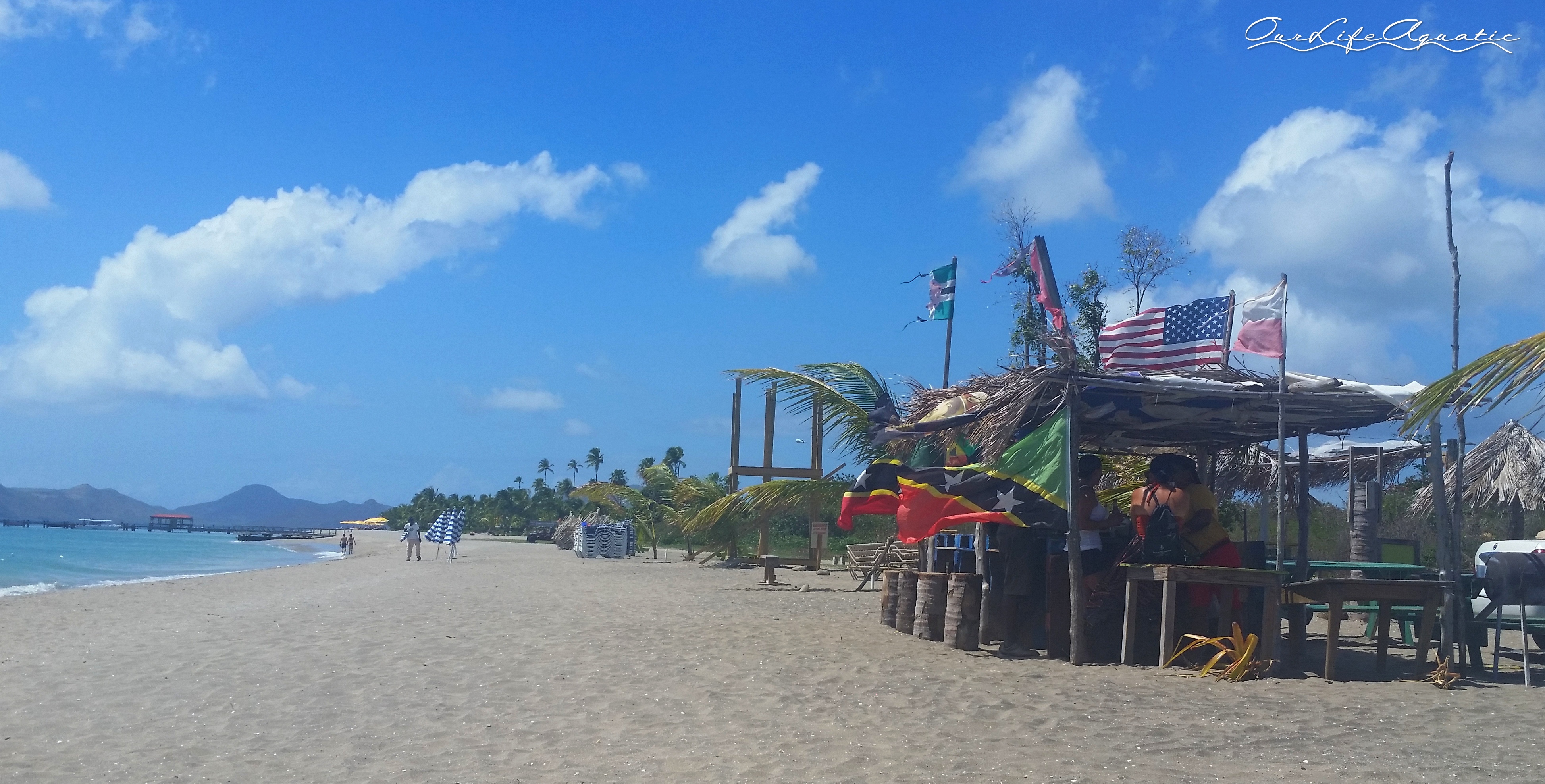 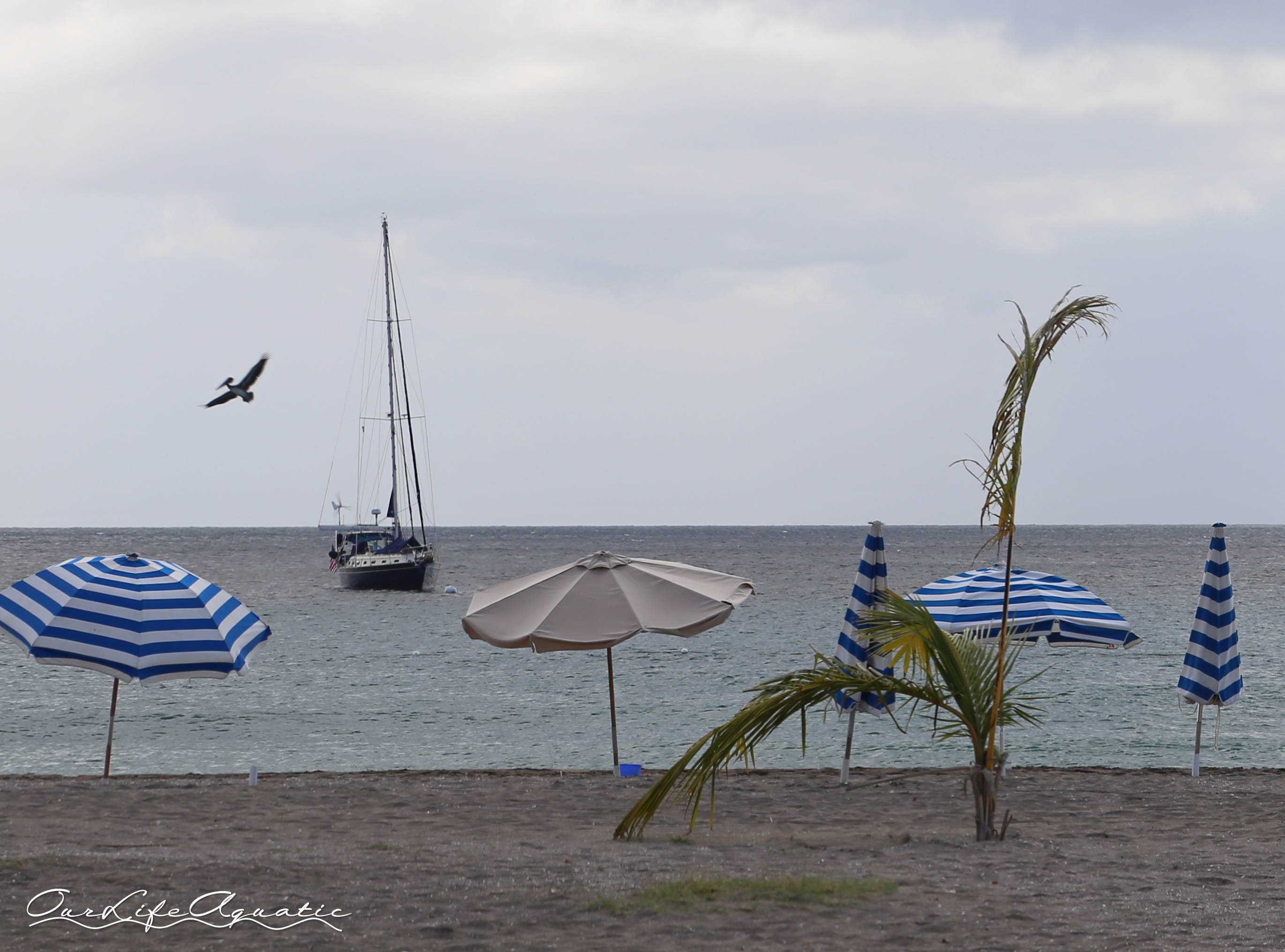 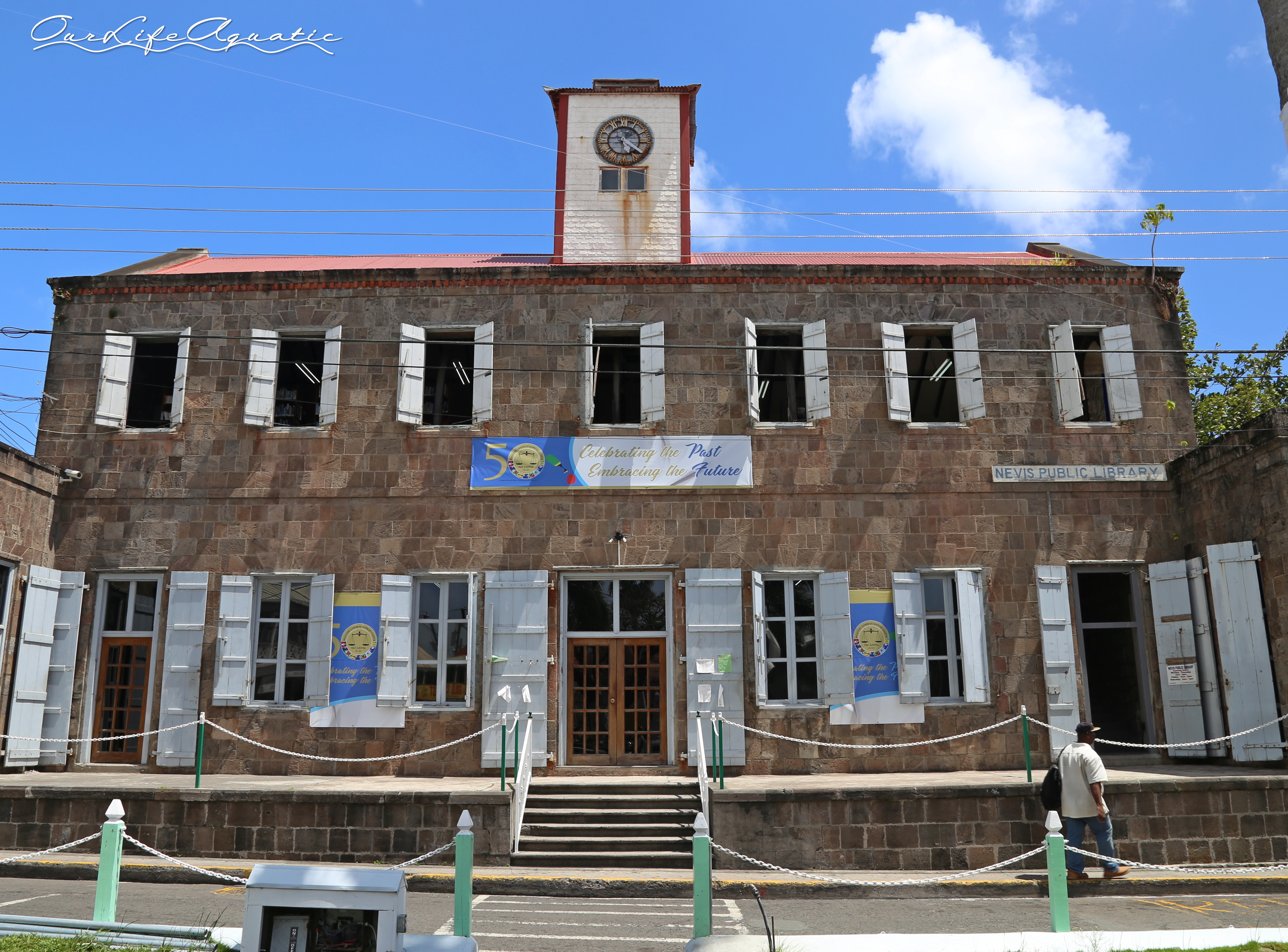 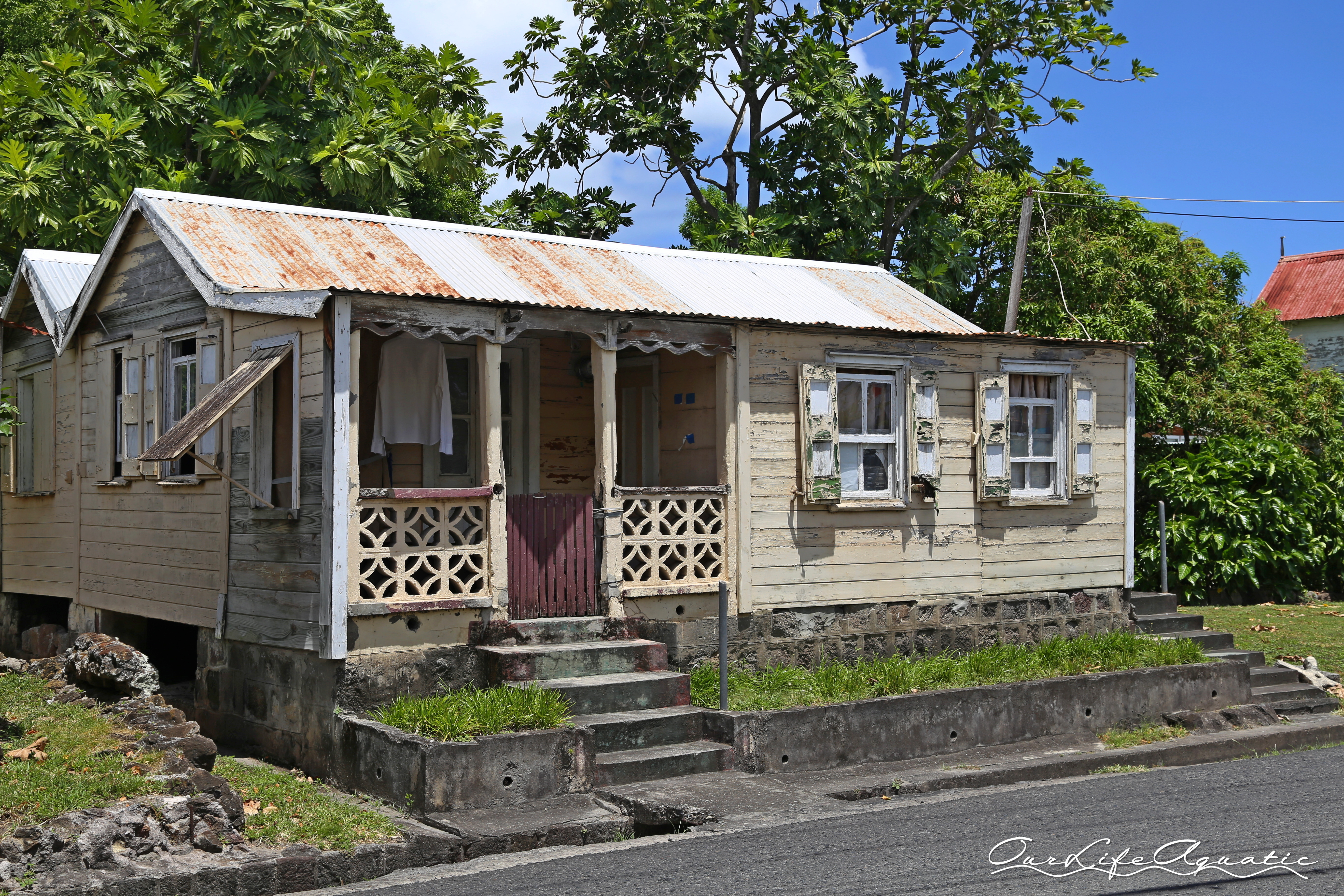 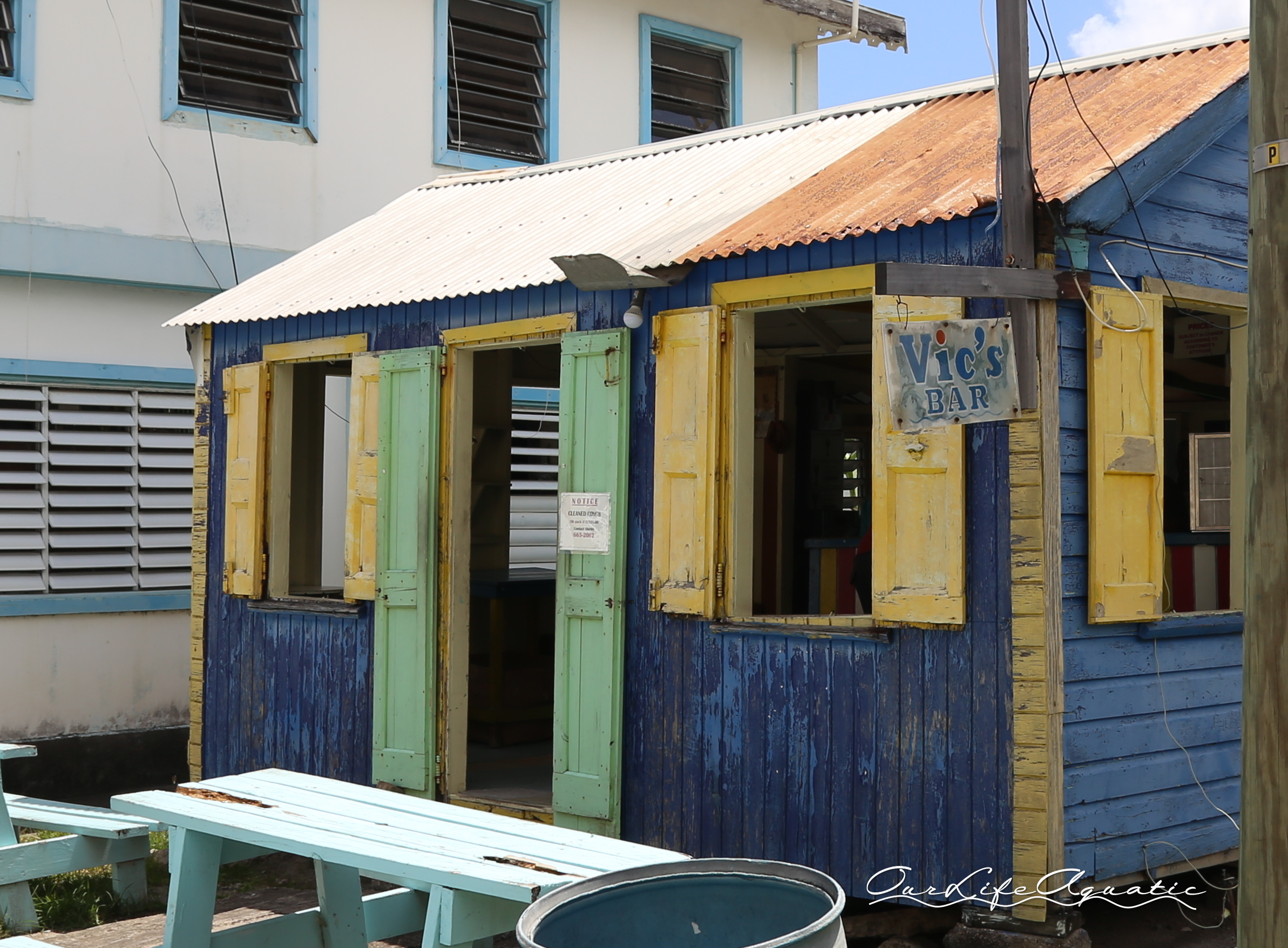 Despite the island’s small size, there is quite a bit to do. Nevis is quite proud to be the birthplace of Alexander Hamilton, and has a small but informative museum dedicated to his life and accomplishments. The hiking, bike riding and scuba diving offer different ways to explore the island’s many levels and stay active. 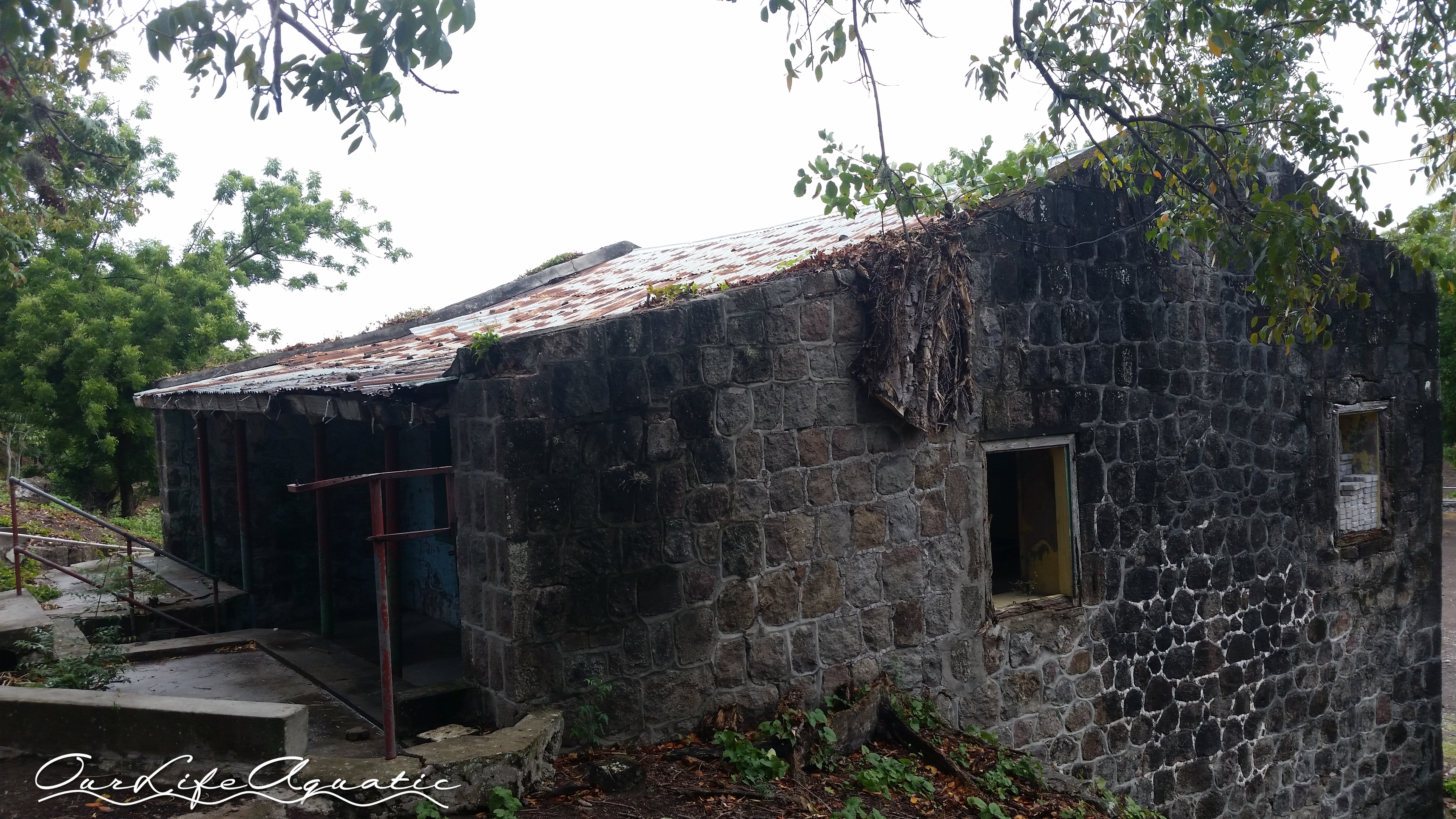 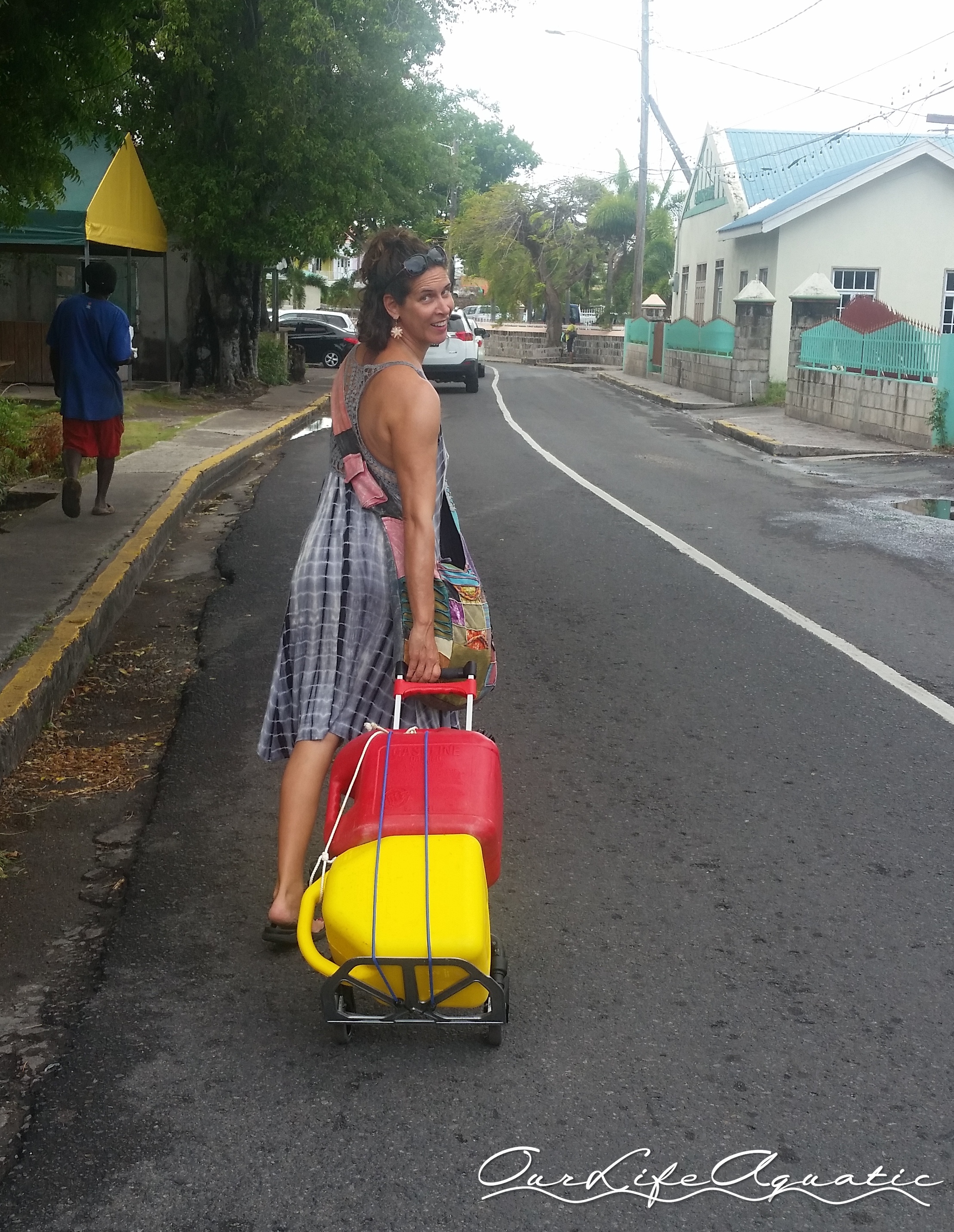 Sometimes getting diesel for the boat is a challenge

Inside one of the bathing rooms

There are cold waterfalls, and steaming hot springs. The food is amazing and ranges from modest creole cafes to high-end dining in restored plantations and mansions. Of course, we had to try it all. 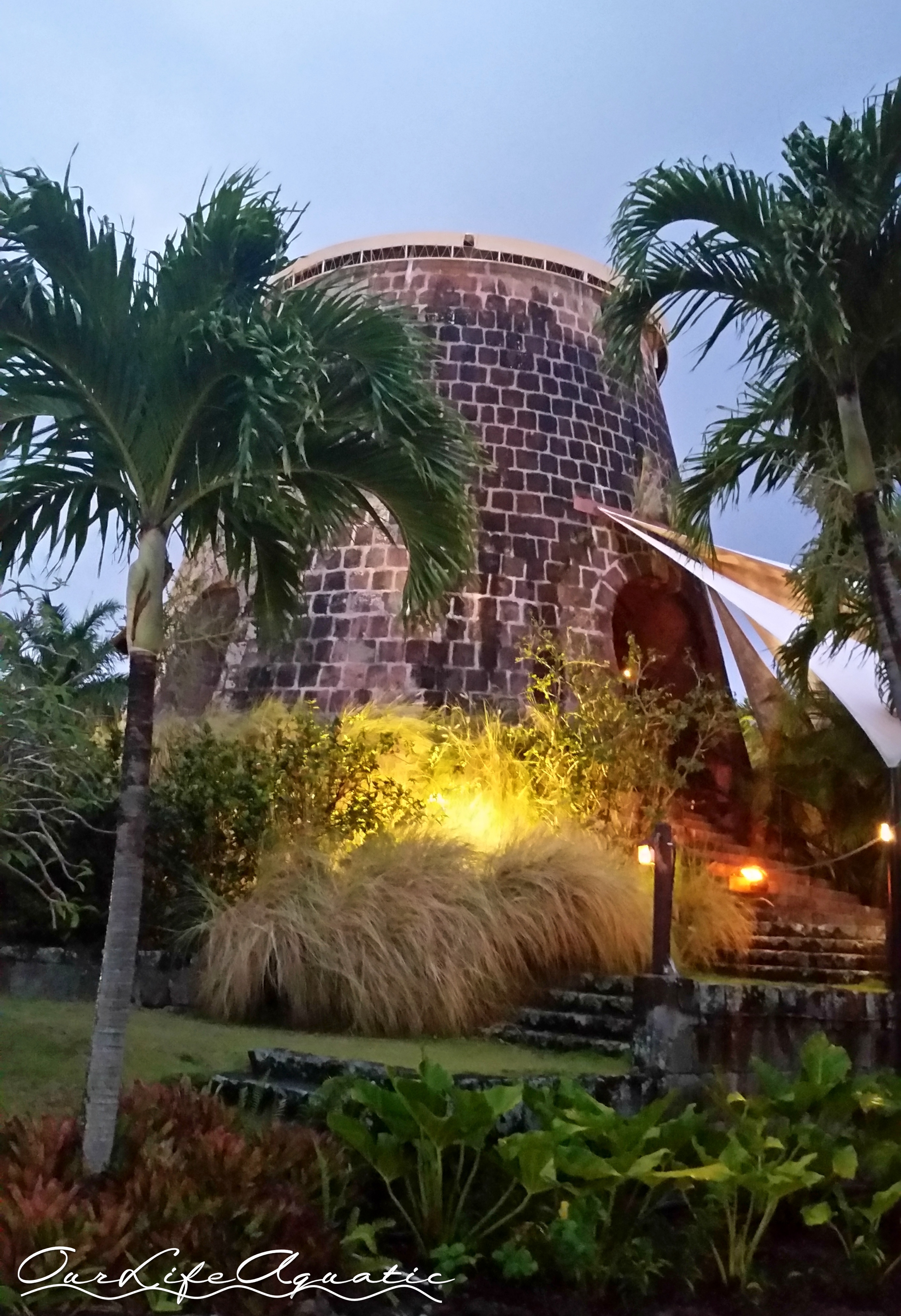 Dining in a sugar mill by candlelight was a remarkable experience

Chillin' at the Cafe des Arts 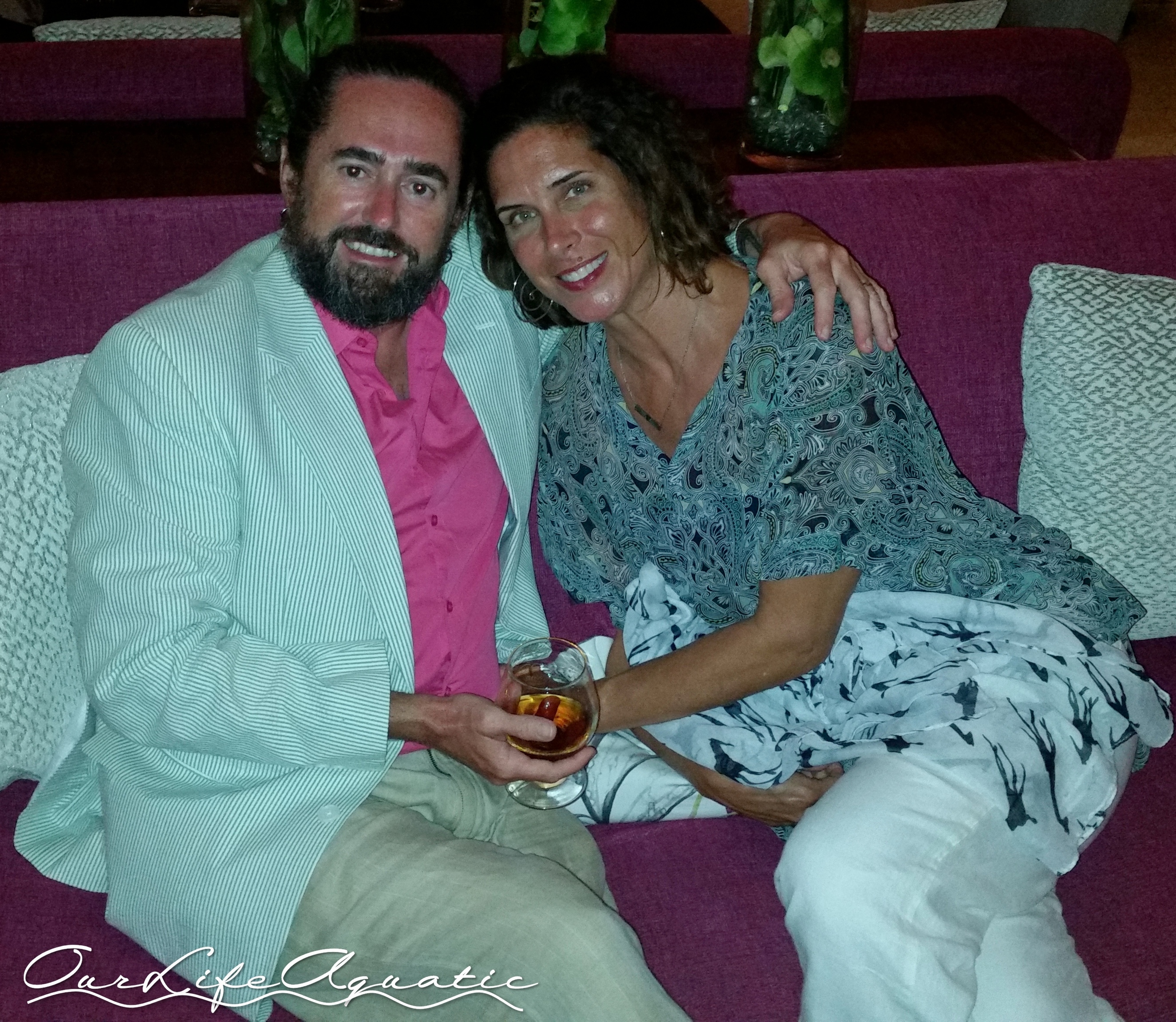 Dressed up for a fancy dinner 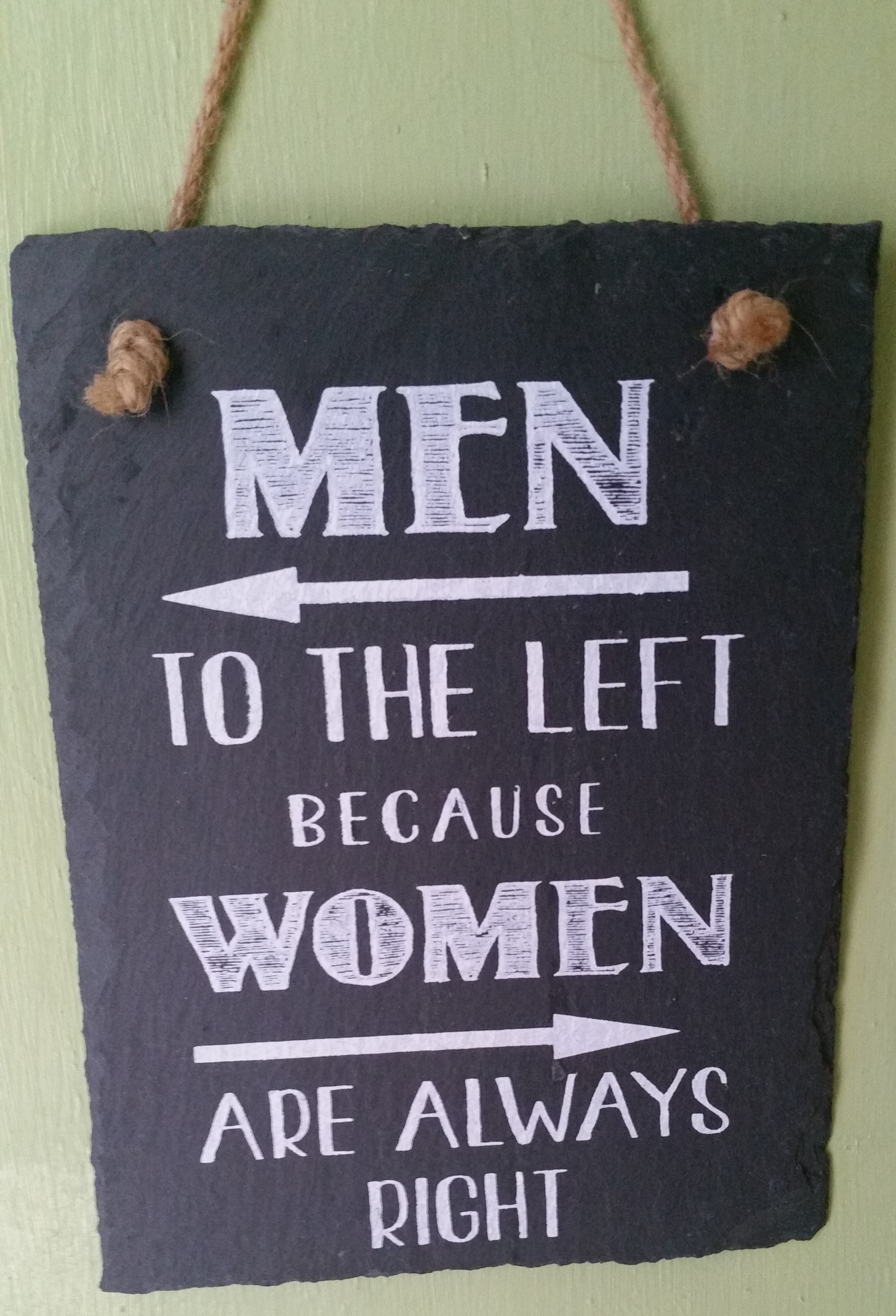 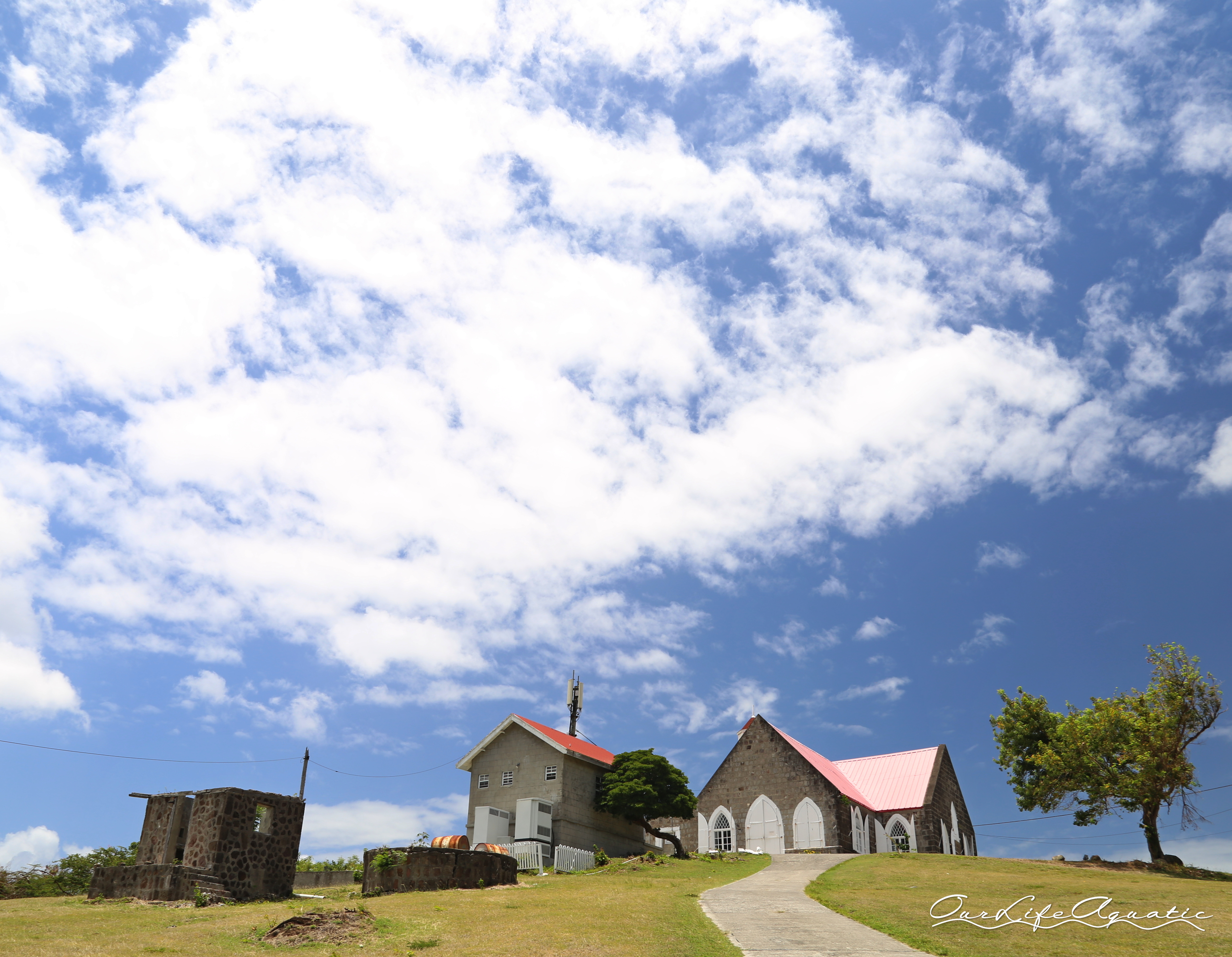 Built in 1643, St. Thomas' Lowland Church was the first Anglican Church in the Caribbean

Feeling energized one afternoon, we attempted a hike to “the source,” a rain forest spring high up in the mountains. After two hours of hiking a perilous and desolate jungle trail that went up and down like a rollercoaster, we decided to turn around. We might have been close to the end, but we had just a few hours of daylight and the path was getting steeper and more treacherous with every step. 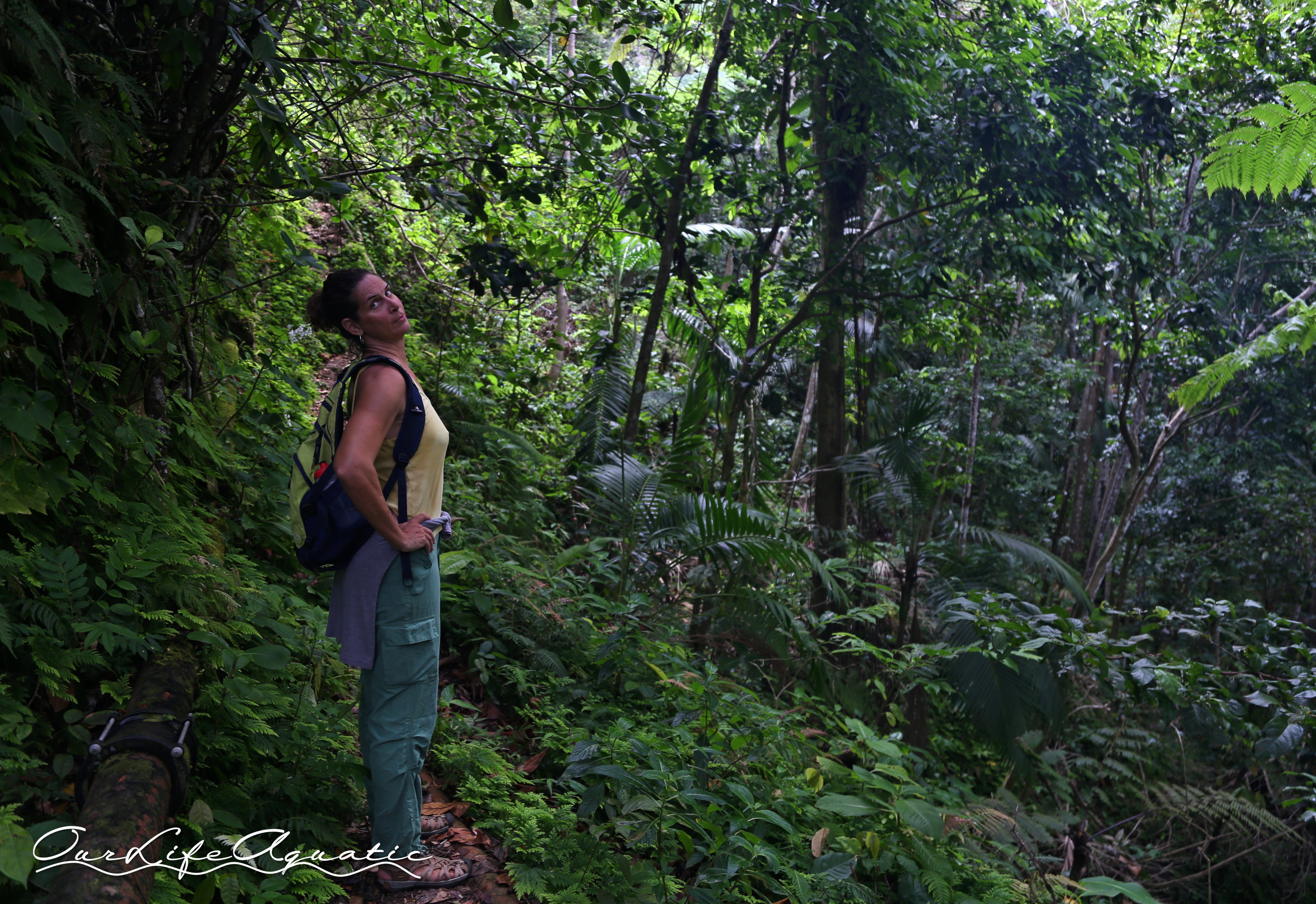 So lush, it was hard to see the trail at times 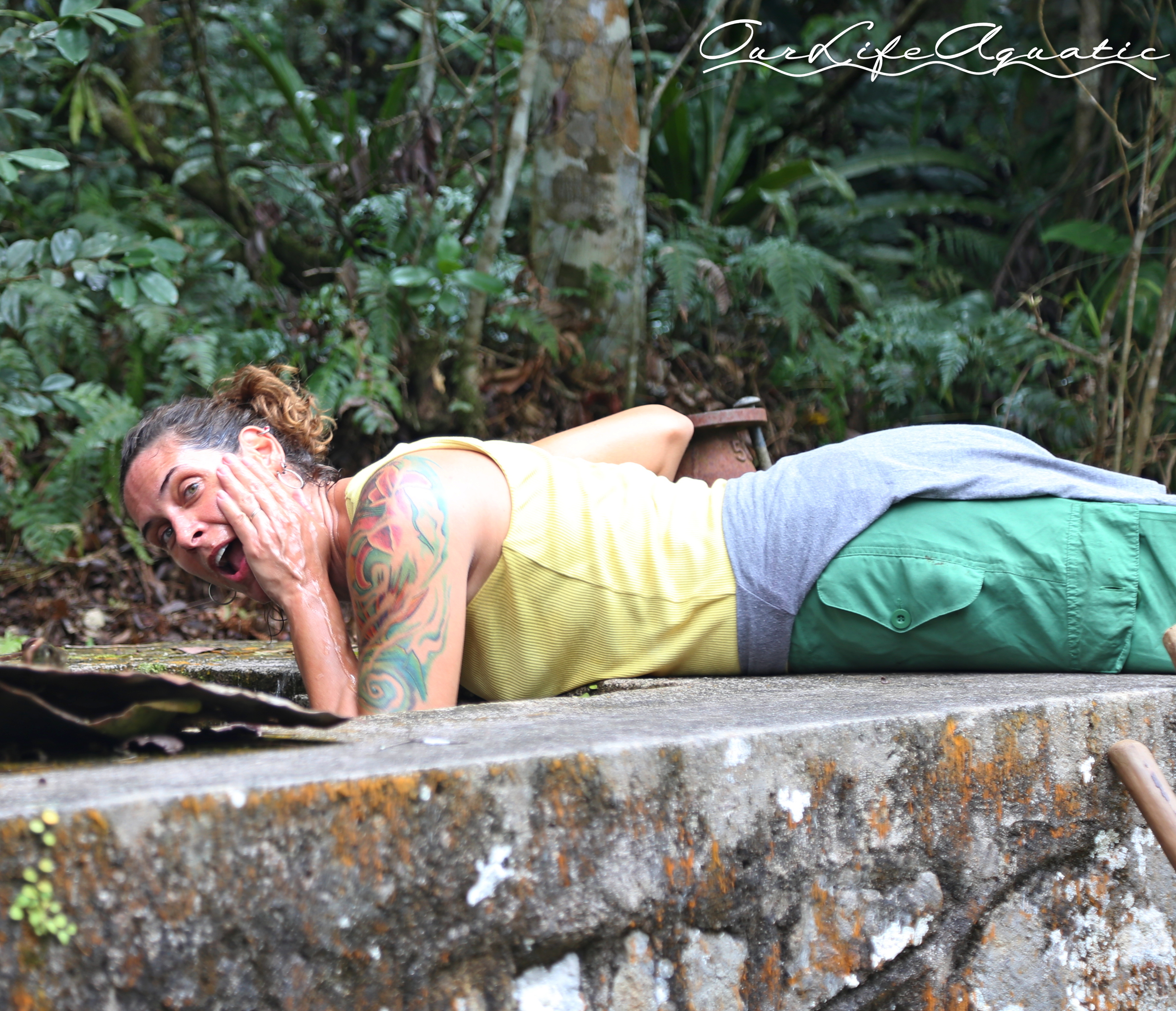 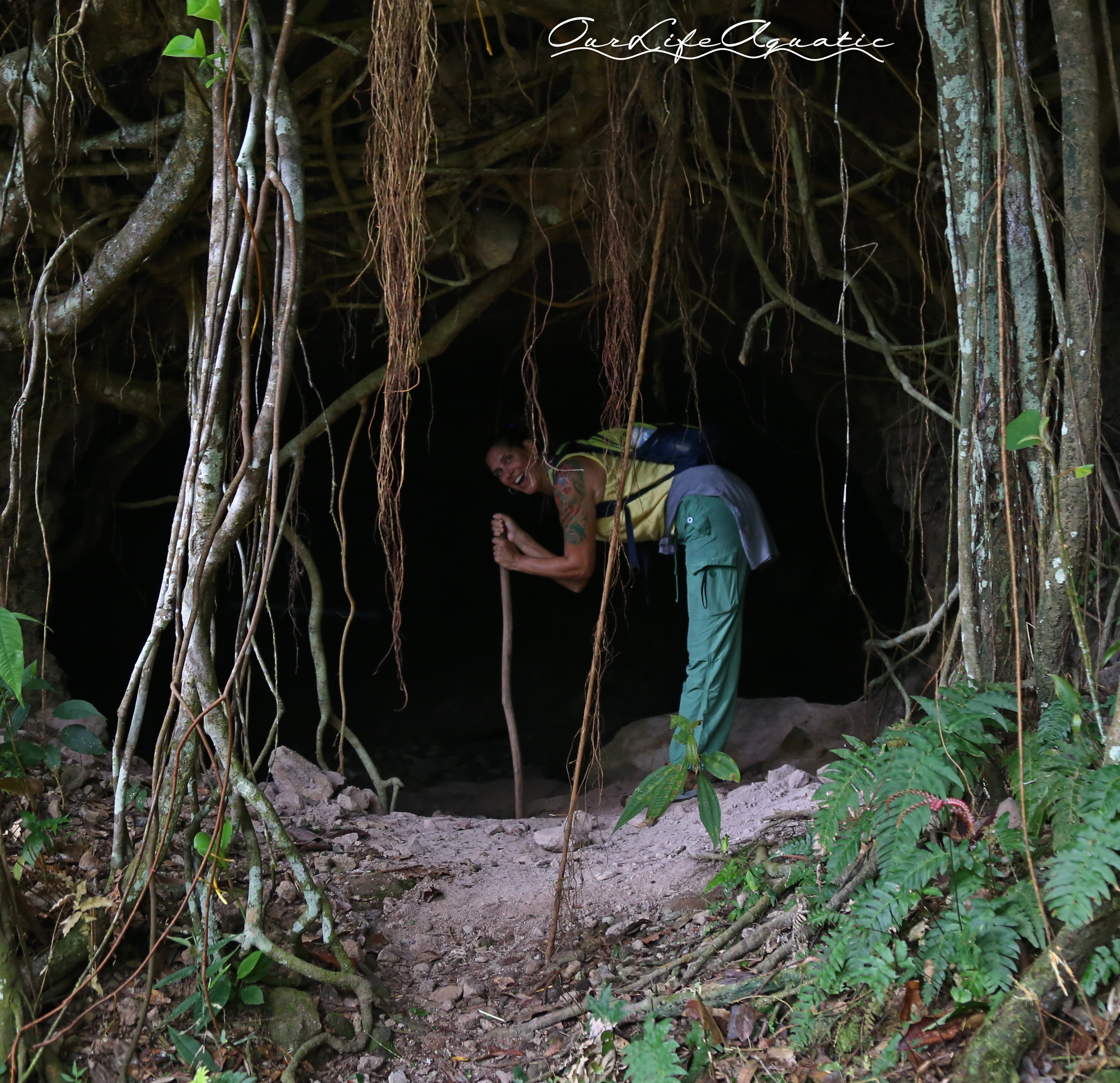 Something's lurking in the darkness 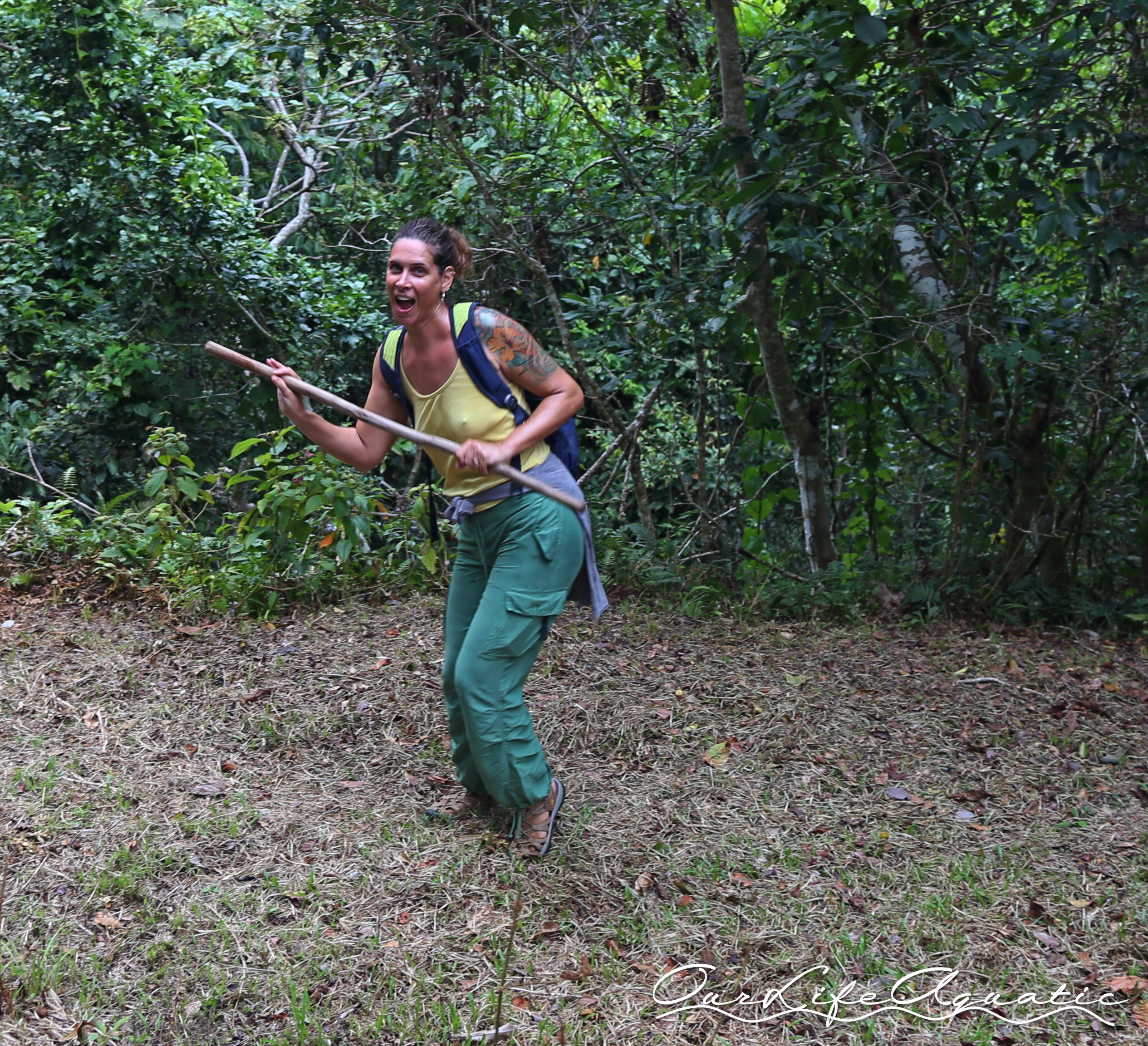 Why not break out into a "Putting on the Ritz" in the middle of the jungle? 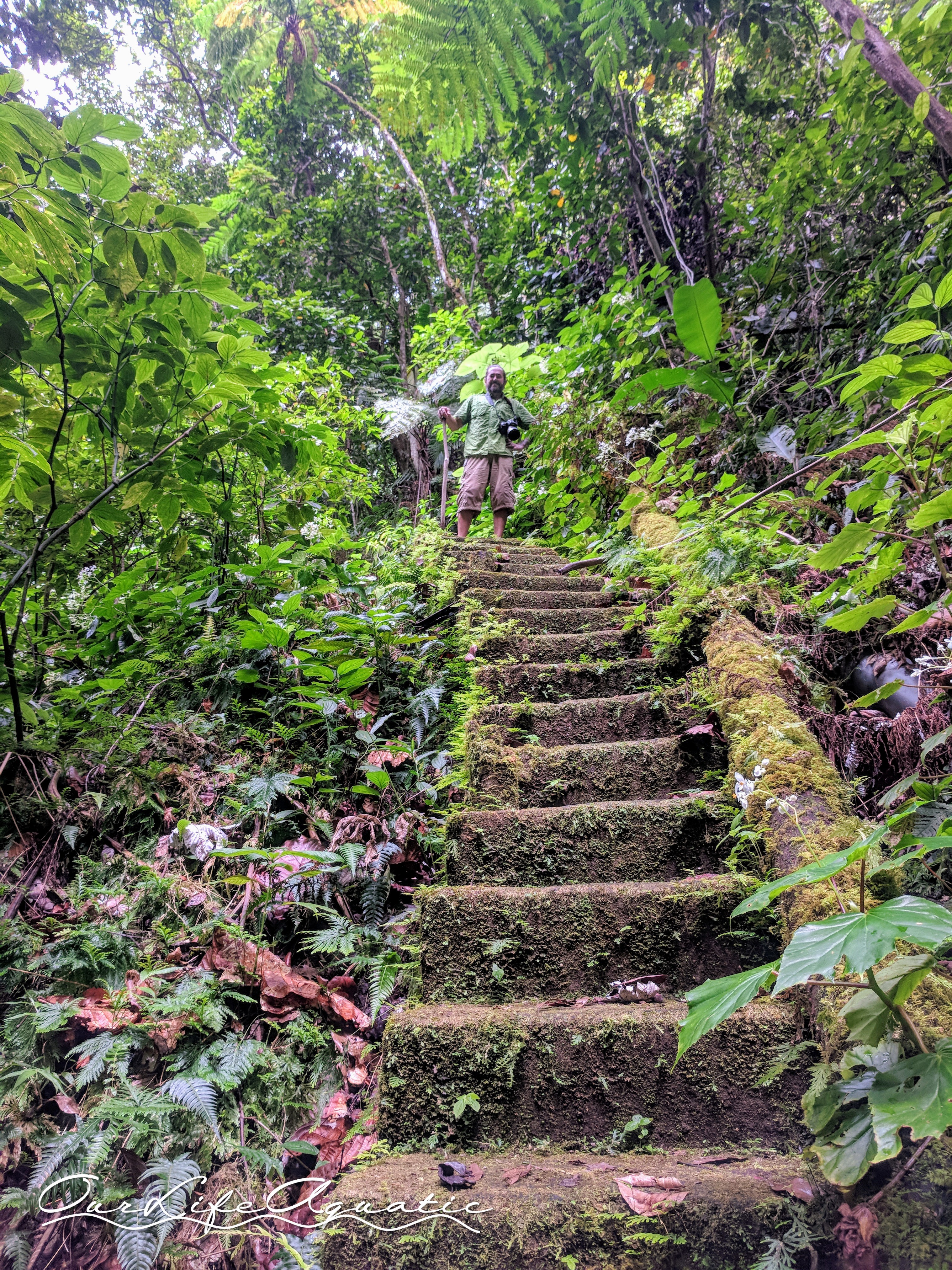 We might have failed at reaching “the source,” but the scenery was spectacular and we needed some exercise. Naturally, we rewarded ourselves with cocktails at the stunning Golden Rock Inn upon our return.

One of many ponds at Golden Rock Inn 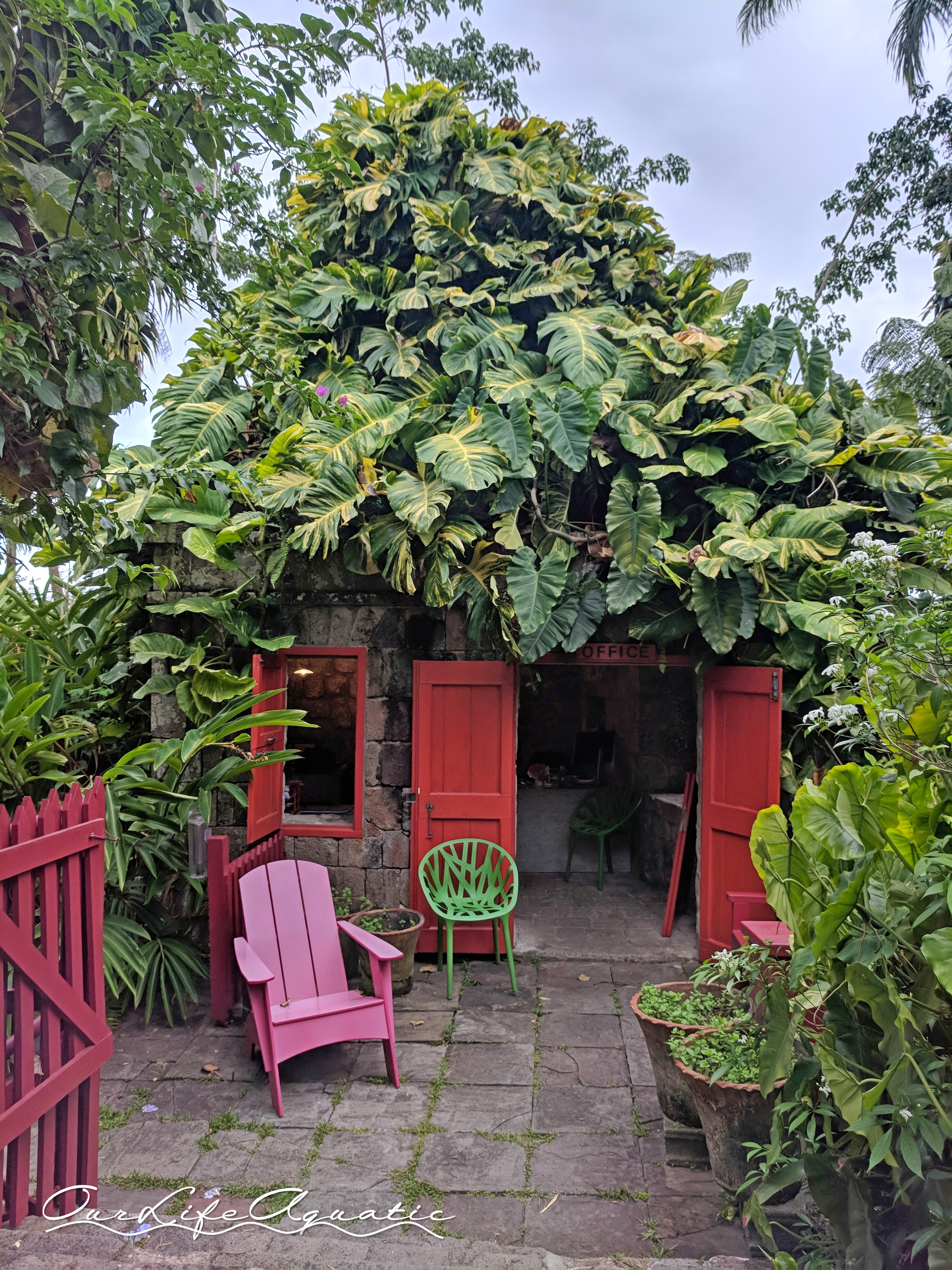 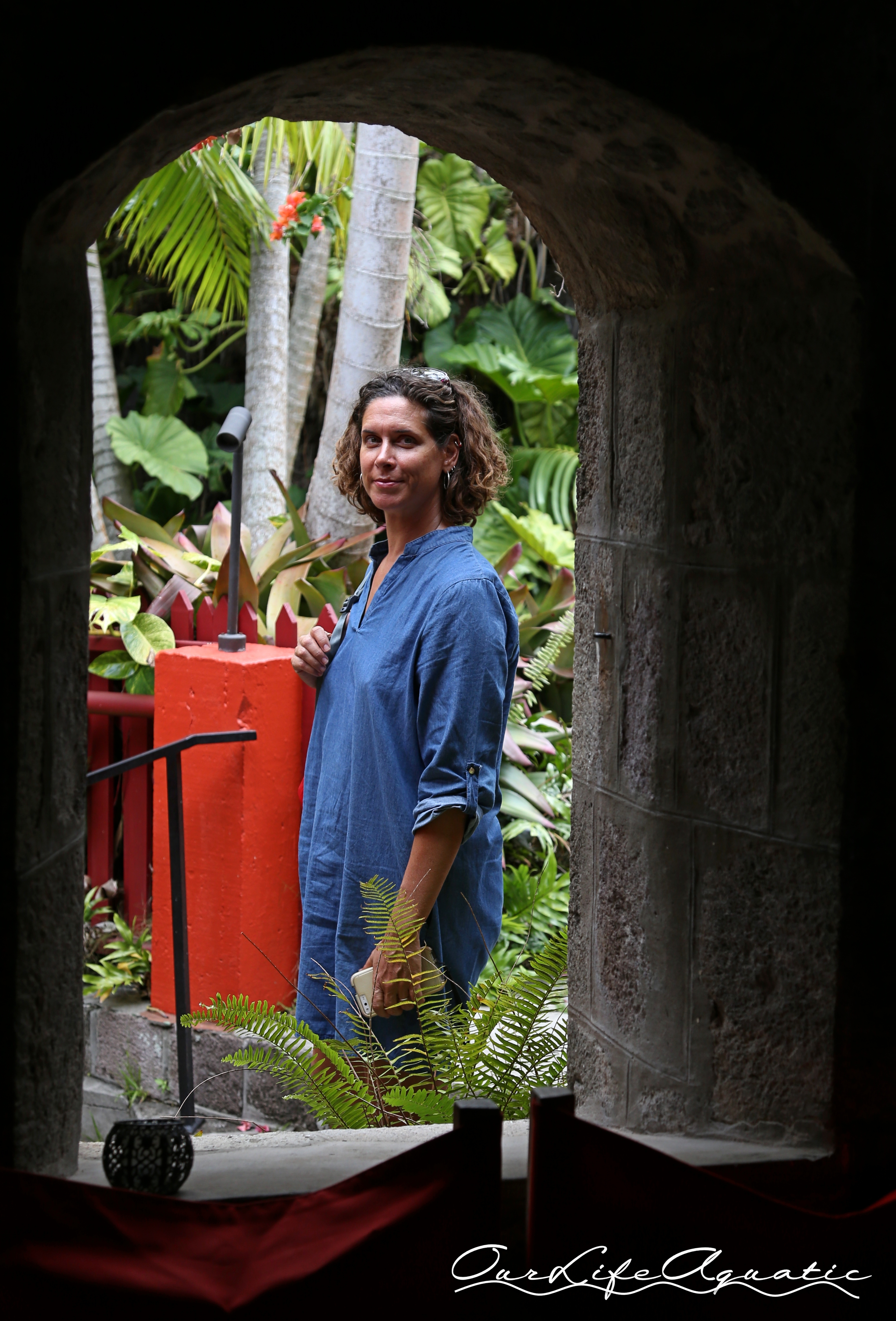 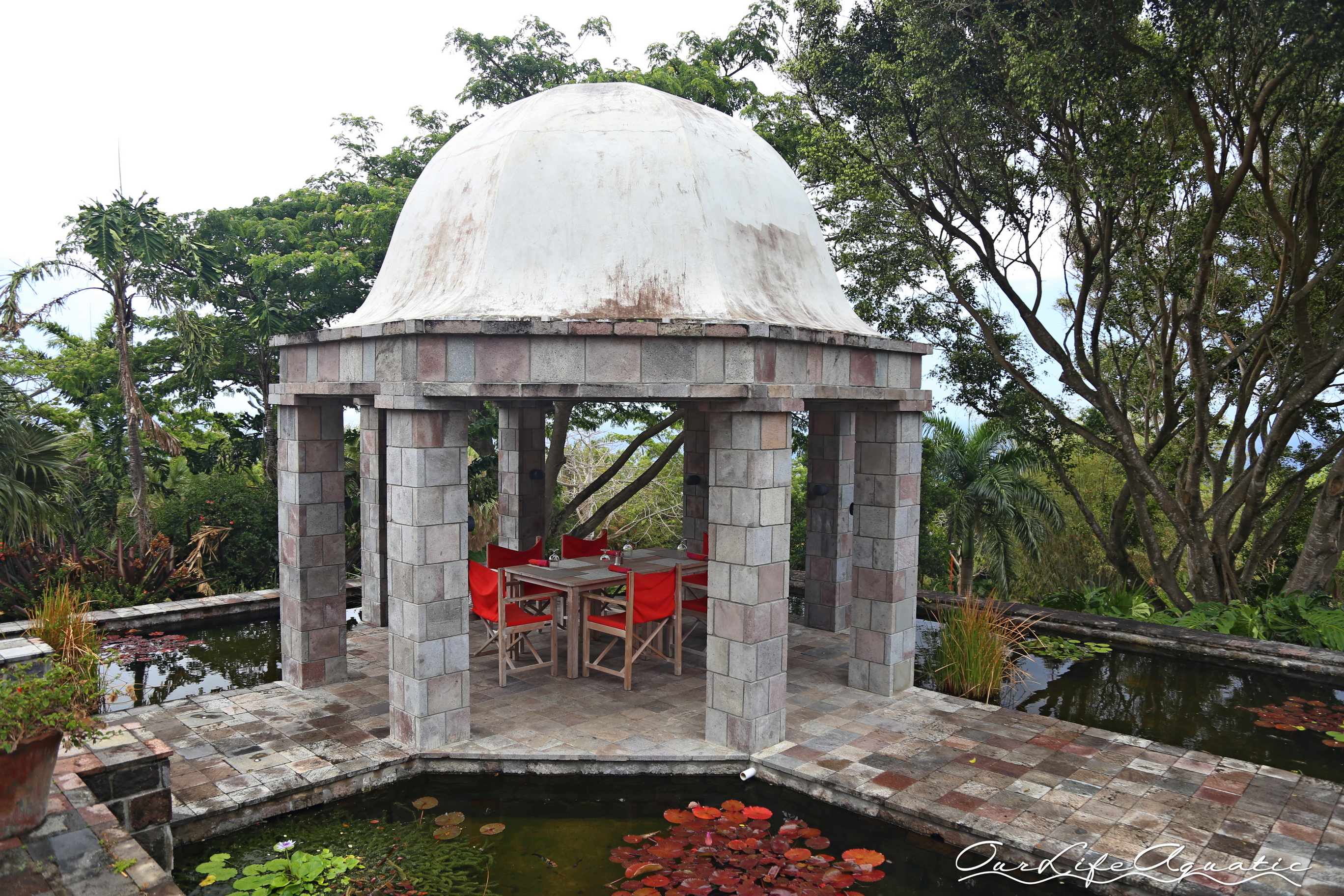 Our time in Nevis also included reuniting with friends and making new ones. Wendy and Bill aboard s/v Overstreet love Nevis so much that they live there part of the year. They invited us over to their hillside home for dinner and taught us how to pop open a champagne bottle with a saber (or a machete if a proper saber is not readily available). 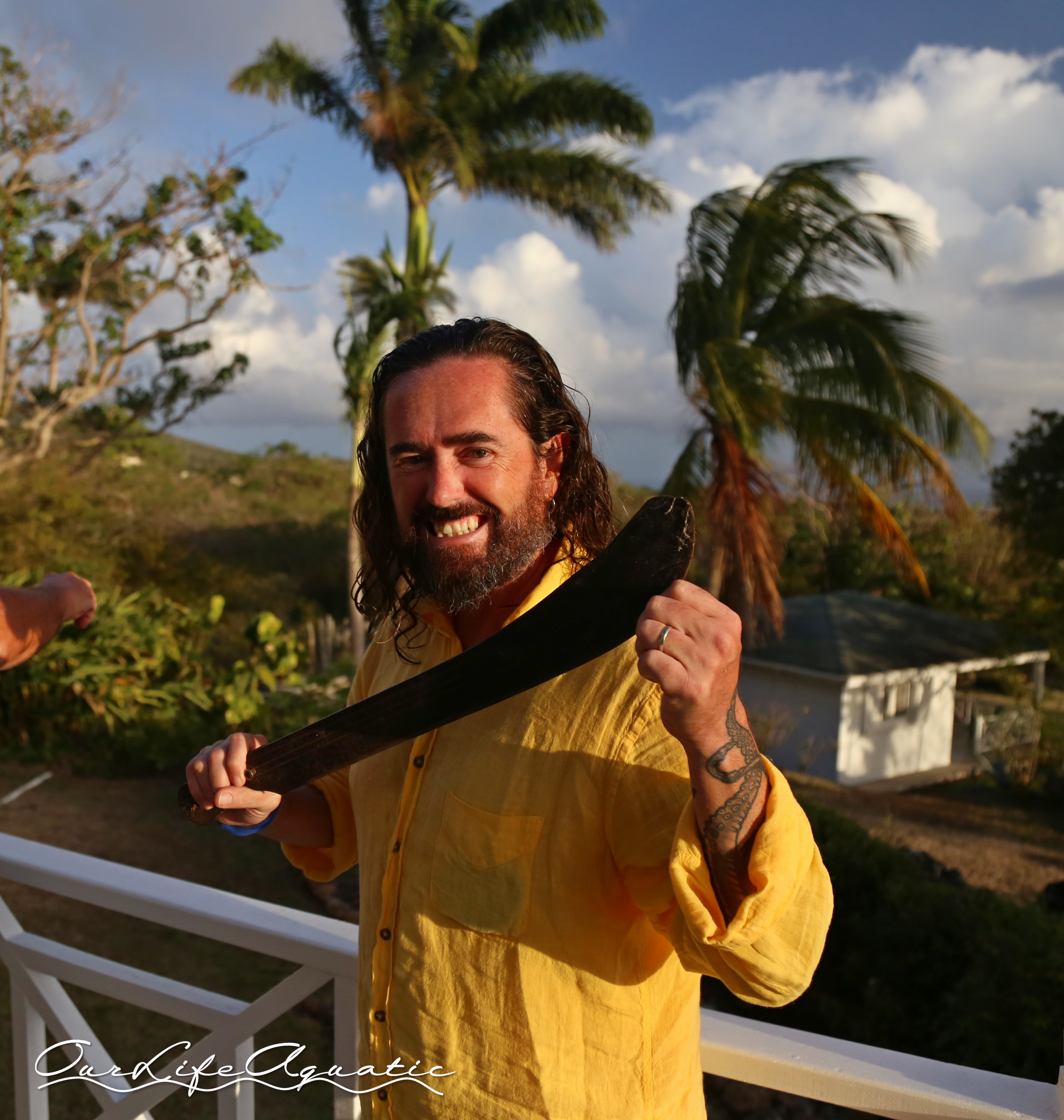 Ready to pop the champagne 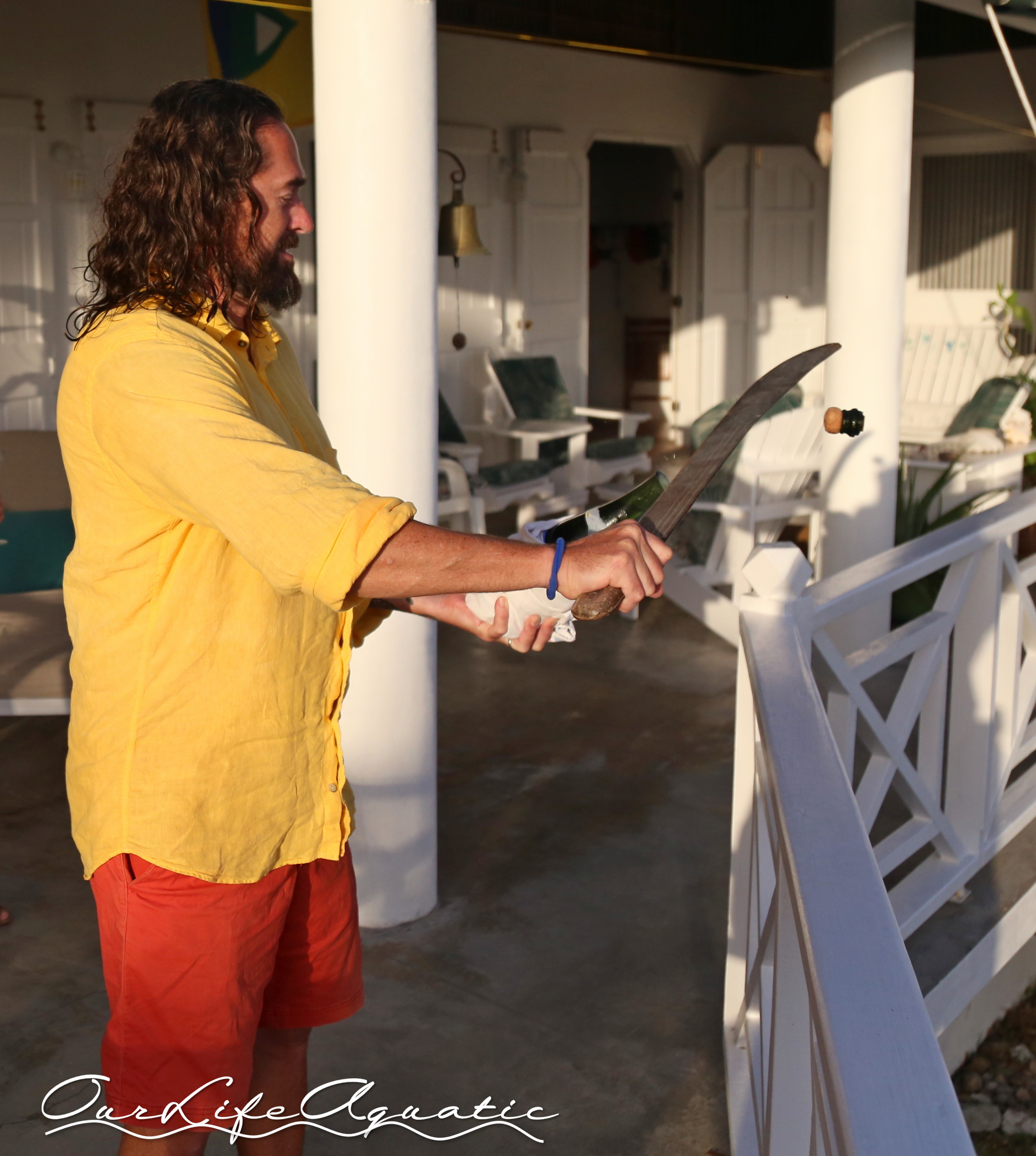 How do YOU do it? 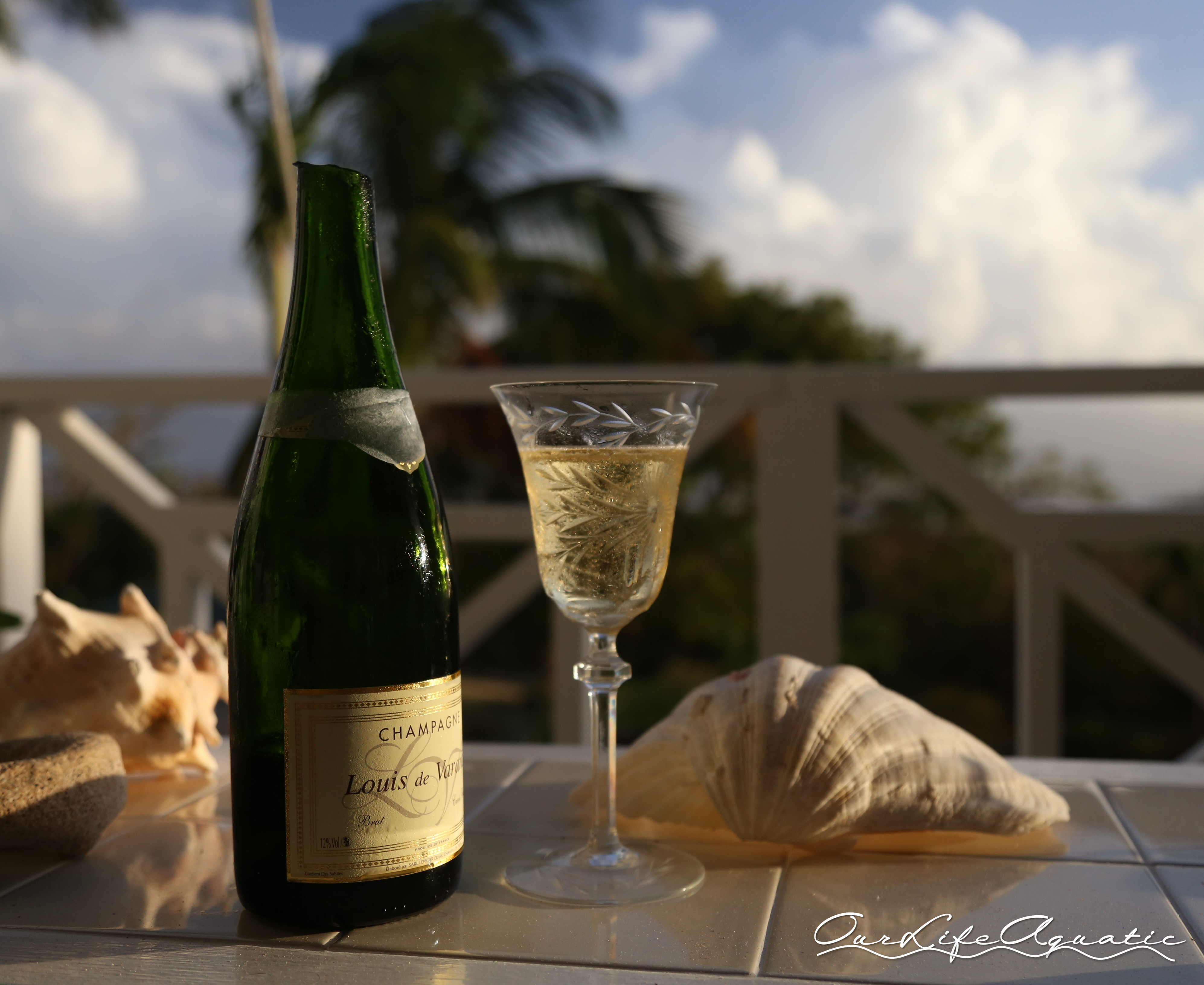 We also made a lunch date with an online acquaintance recommended by a mutual friend. Brittany, author of the Windtraveler blog, had been invited to visit Nevis with a few other travel writers by the local tourism bureau. It’s amazing how quickly you hit it off with likeminded people. We became instant friends with Brittany, Riselle of the Traveling Island Girl blog, and Jen of the Jen There Done That blog. Some libations may be responsible for the boisterous laughter that had other restaurant patrons staring at us as well as one of us getting up the nerve to do some pole dancing (Hint: it wasn’t Kimberly). 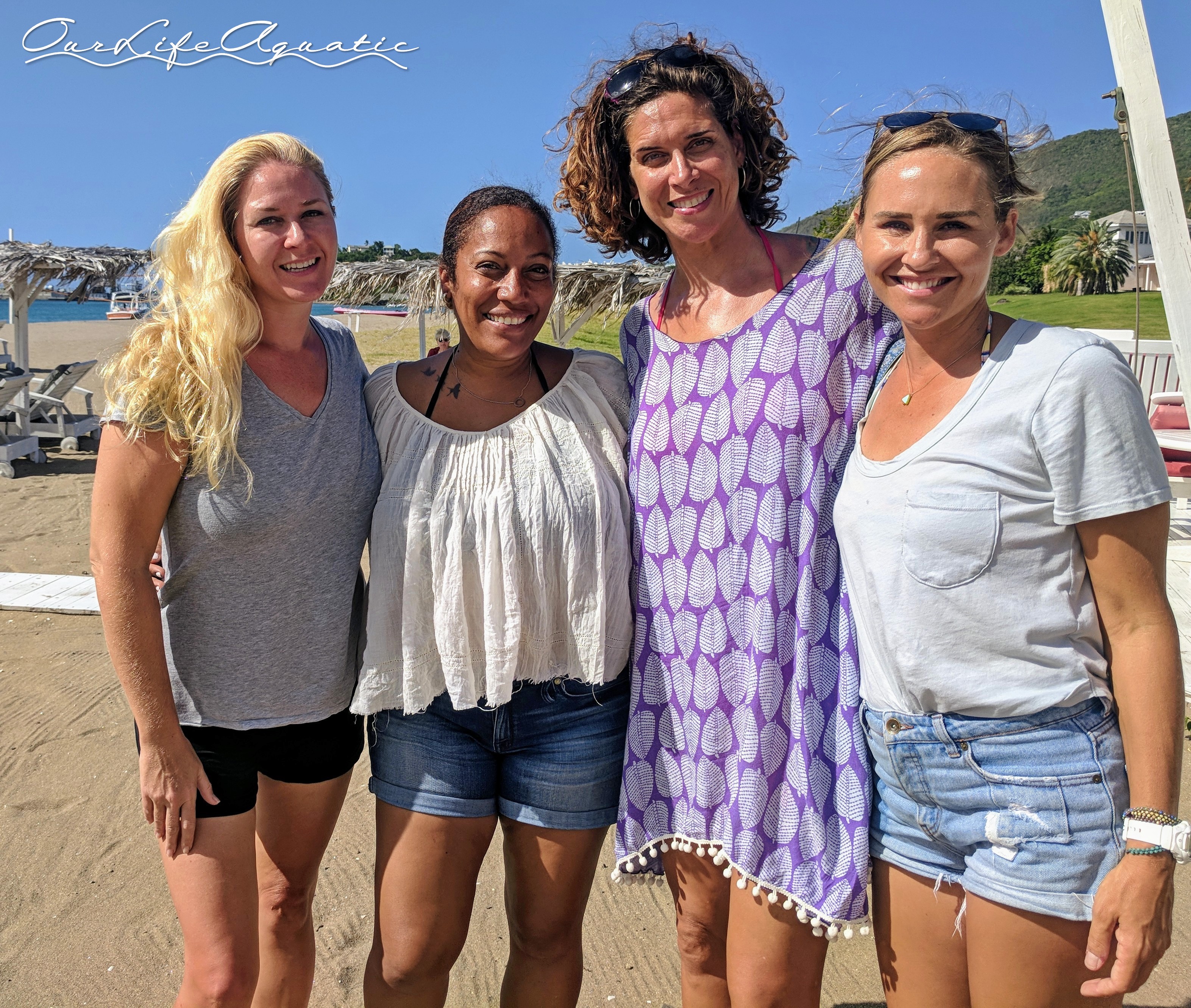 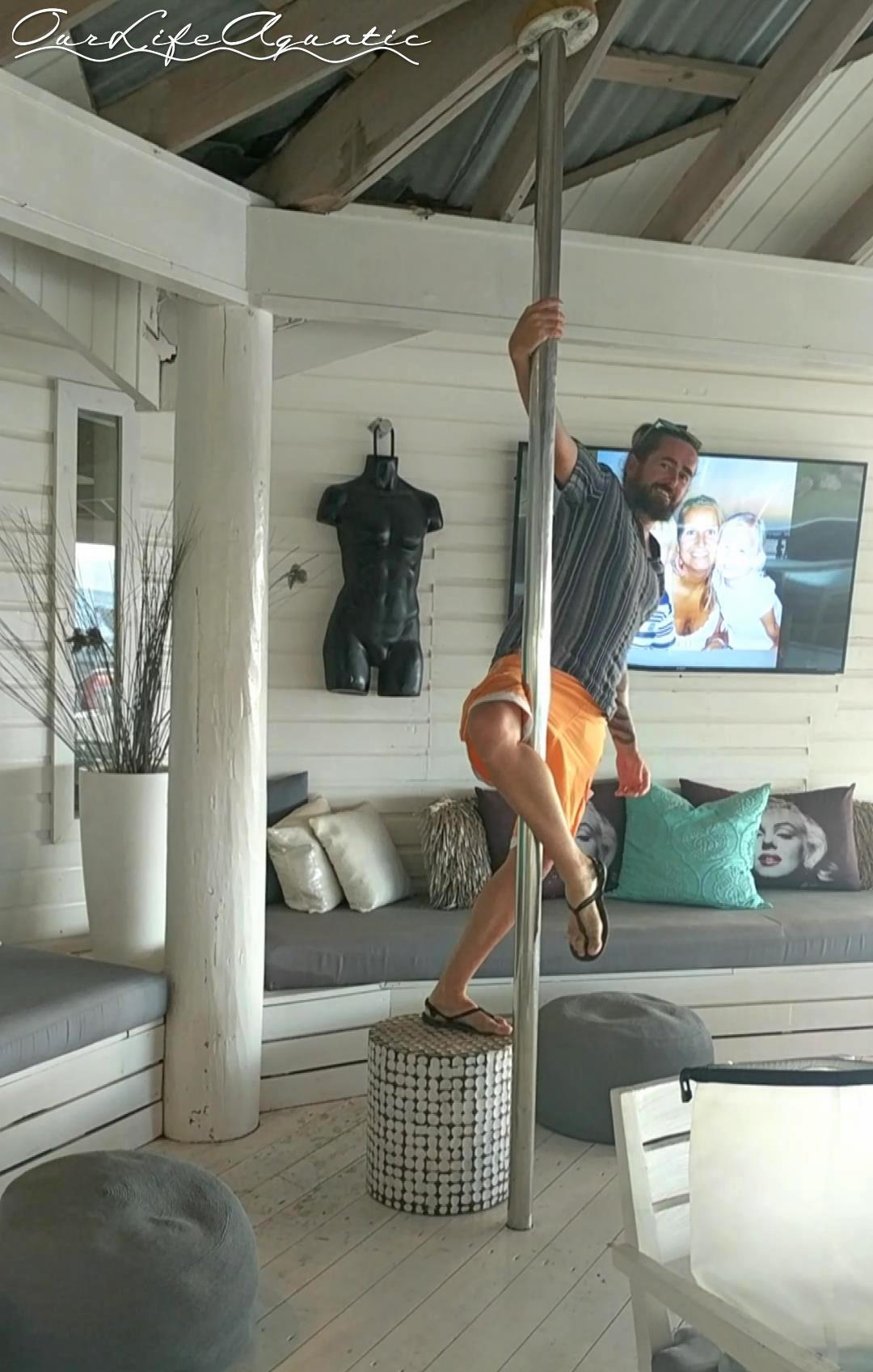 Having packed a month’s worth of activity into a single week in Nevis, we were ready to sail further south. We loved it so much there, that Nevis has made it onto the list of places where we could eventually live. Damn, that list is getting long!

Met the builder and caretaker of the bathhouse 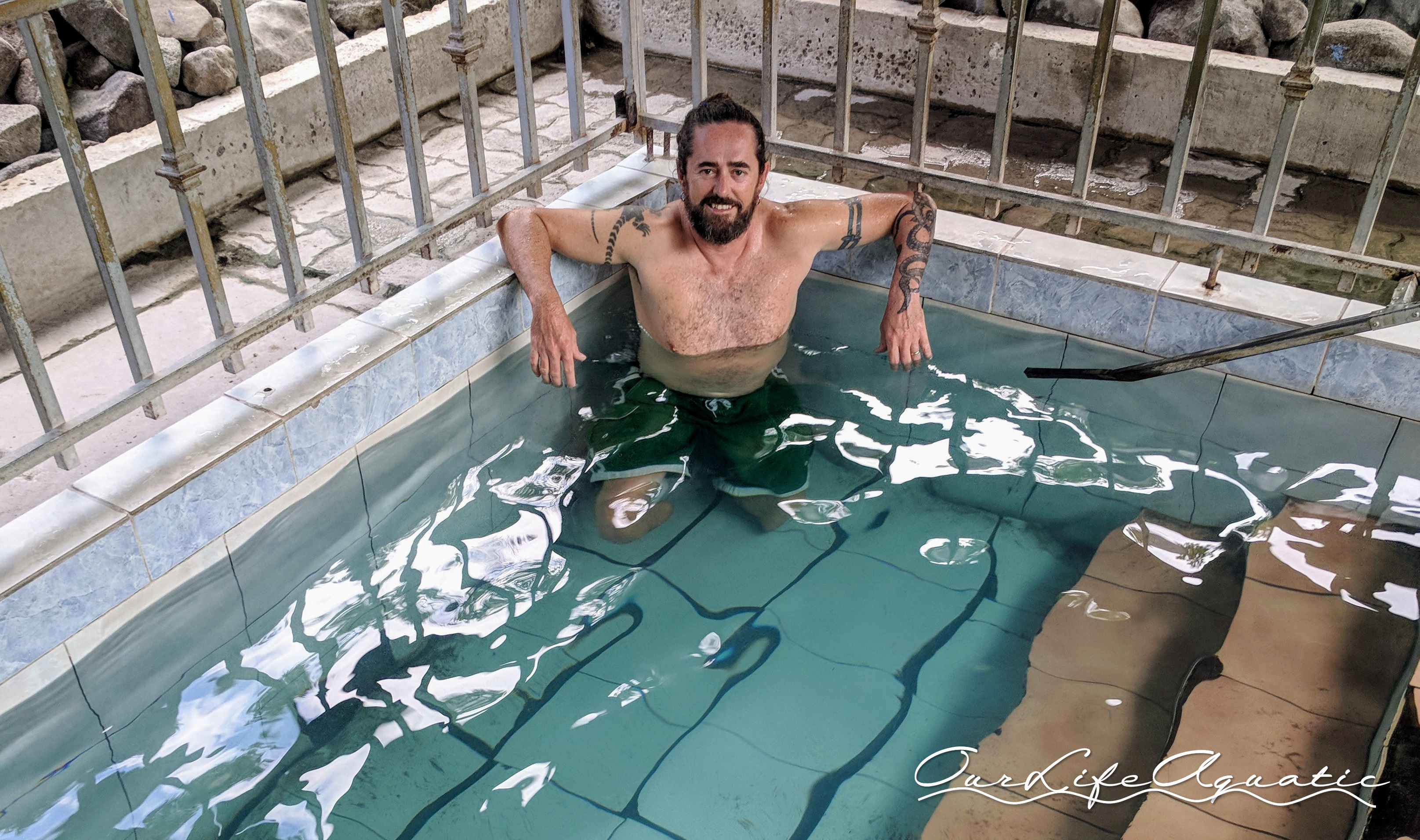