After two days at sea, we arrived in Key West from Tarpon Springs earlier than expected, around 4am. We anchored outside the Northwest Channel to await daylight because all the guides tell you to avoid the Key West approaches at night unless you are very familiar with the area. We are so glad we waited. In the light of day we were able to see hundreds of crab traps that could have gotten caught in our propeller and a huge rock breakwater lining the channel that was hard to see, even during the day, and not well charted.

Since we have been to Key West by land a couple times before, we decided to explore the water side of the island. We found it very disappointing. Most anchorages were crowded, dirty, and full of derelict boats. On the first night, a storm blew through the area with winds gusting up to 50 knots. Boats all around us dragged anchor and, in the morning, we could see several boats tossed up on the shore. In addition to the crowded conditions, mobs of tourists on jet skis dart in and out of the anchorages at full speed all day long. Parasailing boats think it’s funny to see how close they can get their customers to a sailboat mast despite the dangers to all involved. Power boaters don’t think twice about zooming ten feet away from an anchored boat at full speed. After a day, we were ready to leave. 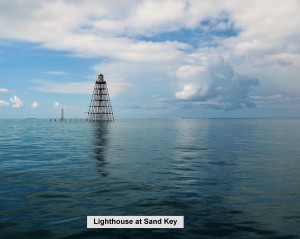 The highlight of the Key West visit was our first diving excursion from our own boat. We sailed a couple of hours away to Sand Key, picked up a mooring, and dove a beautiful coral reef with shallow canyons. This was the first time using the SCUBA air compressor we installed before we left New Orleans. It was amazing to return from a dive to our house and have all the amenities of home waiting for us as soon as we got out of the water. For the first time since we started diving fifteen years ago, we were completely by ourselves; exploring the water on our schedule. We returned to Key West for the night (to a mooring this time, where the boats around us seemed more secure) and we set sail in the morning for the Dry Tortugas, about 55 nautical miles to the west. 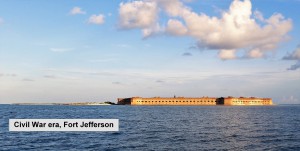 The Dry Tortugas is a National Park made up of several small islands. Only two of the islands are open to the public since the rest are nesting grounds for rare birds and turtles. 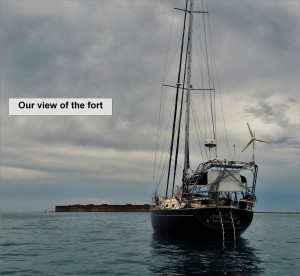 But the two open islands, Loggerhead Key and Garden Key, have a lot to offer. We spent the first day exploring Fort Jefferson and then took the dinghy for the four mile ride to Loggerhead Key to dive the wreck of a century old windjammer ship. 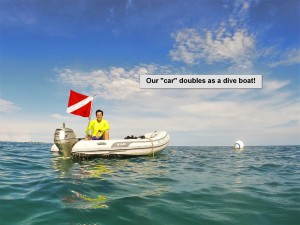 The wreck was covered with coral and teeming with marine life. 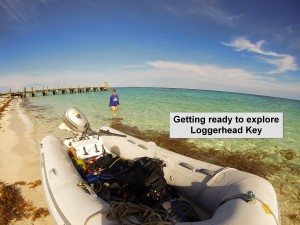 Our visit was not all play. We took advantage of the crystal clear water and spent a day cleaning the hull, through-hull water inlets, and replacing all the sacrificial zincs (metal pieces that attach to the propeller, shaft, and bow thrusters and are designed to decay with electrical currents in the water so the important parts don’t deteriorate). As we were finishing our projects, the people on the catamaran anchored next to us invited us over for drinks. It was our first such invitation, and we had a wonderful time getting to know John and his friend Josh, and touring John’s spacious boat. 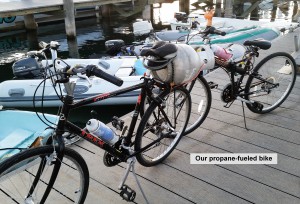 On the way back East, we stopped to provision in Key West. The previous time we provisioned, we were dockside in Apalachicola and everything was walking distance. For the first time, we took the bikes in the dinghy to town in Key 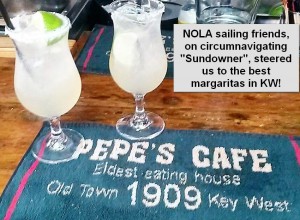 West to get all our shopping done. We looked pretty funny riding around town with a 10lb cylinder of propane strapped to the back of a bike. We got several jokes about our gas powered bike along the way. After running around town in the heat all afternoon and all our shopping complete, we stopped for a well-earned happy hour cocktail before overloading our dinghy and heading back to the boat. 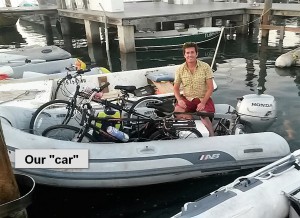 Here comes Hurricane Erika…headed right for the Keys. Fortunately, the storm weakened, but it still posed a risk to Key West. The last place we wanted to ride out a tropical storm at anchor was Key West because of all the derelict boats with questionable anchors and rotted rode (that’s sailor talk for the rope or chain that ties the anchor to the boat). We found a well-protected anchorage on the charts about 20 miles east of Key West, and headed out. Big Pine Key has a large, shallow bay that protected us from winds and waves from almost every direction. Best of all, there were only five other boats anchored in the entire bay. After anchoring, we checked the weather and opted to stay there until the remnants of the tropical storm passed. Although we had steady winds with gusts over 30 knots for the whole day of the storm, the protected bay gave us some of the calmest conditions we had seen so far and we got some much needed rest. The day after the storm moved through was a beautiful, clear day with great winds to sail to our next destination, Marathon Key. 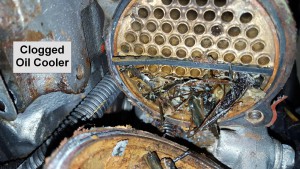 Marathon Key was supposed to be a quick stop for a day or two to visit a friend and provision, but our engine continued to overheat despite our earlier troubleshooting and repairing of what we could ourselves. Since there is a diesel repair sho 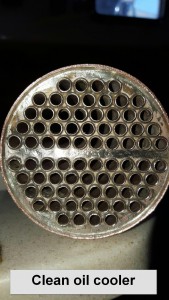 p in Marathon specializing in our type of motor where we could dock the boat for the repairs, we decided to do it now rather than later. It turns out we had more serious issues than just an overheating engine, our turbocharger was leaking oil. This is a dangerous situation than can cause a runaway engine and lead to complete catastrophic failure when least expected. So glad we had it looked at by experts! We’re now ready to continue the journey with a clean oil cooler and new heat exchanger and turbo charger. These repairs put a dent in our budget, but it would have been much worse if it happened later in our trip in the Bahamas or beyond where getting parts is expensive and time consuming.

Next stop, Key Largo in the Upper Keys. We will get our Divemaster certifications and then onward to the Bahamas.